Skip to main content
A medical worker prepares a syringe of the Pfizer-BioNTech Covid-19 vaccine in a suburb of Manila on November 29, 2021 ( AFP / Ted Aljibe)

Online articles shared on social media claim a document released by the US Food and Drug Administration (FDA) revealed more than 1,200 deaths related to Pfizer-BioNTech's Covid-19 vaccine in a 90-day period. But the pharmaceutical giant says the document does not indicate the fatalities are linked to vaccination, and it concludes the shots are safe -- a finding supported by US health authorities as well as clinical research.

"Pfizer Documents Reveal Over 1,200 Vaccine Deaths Over 90-Day Trial Period," says the headline of a December 2, 2021 article on the National File website. 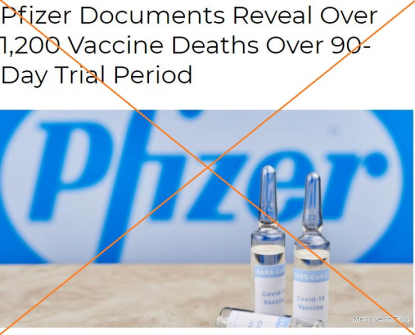 Screenshot of an article taken on December 14, 2021

A separate article claims the Pfizer data showed a "shocking risk level" for the vaccine, while another says it raised "serious concerns" over the shots.

They are part of a pattern of inaccurate claims -- which AFP Fact Check has repeatedly debunked -- that seek to raise fears about Covid-19 shots via reports of deaths and other adverse effects following vaccination, even though no causal link was established between the problems and the jabs.

The document cited in the articles contains nothing to indicate the vaccine was linked to deaths. The figure of 1,223 fatalities among 158,893 adverse effects reflect "spontaneous" reports from sources that include health officials in several countries, without any verification of the cause, among the millions of vaccinated people worldwide during that period, Pfizer spokeswoman Dervila Keane told AFP.

It does not indicate specific causes of death, and the fatalities may include people with "various illnesses" such as cancer or cardiovascular disease, she said.

While the document is being cited as evidence that Pfizer-BioNTech's Covid-19 vaccine is dangerous, its conclusion stated that "the data do not reveal any novel safety concerns or risks requiring label changes" and "confirms a favorable benefit: risk balance" for the vaccine, of which Keane said some 2.5 billion doses have been shipped.

US health authorities also track reports of fatalities and other problems following vaccination through the Vaccine Adverse Event Reporting System (VAERS) system, which is run by the FDA and the Centers for Disease Control and Prevention (CDC).

FDA spokeswoman Alison Hunt told AFP that it requires health care providers to report any death following vaccination to the system, "even if it's unclear whether the vaccine was the cause."

"Reviews by FDA and CDC have determined that the vast majority of the deaths reported are not directly attributable to the vaccines," she said, adding that reports of deaths after Covid-19 vaccination are "rare."

Clinical research indicates no link between the Pfizer-BioNTech vaccine and fatalities.

A multinational, placebo-controlled, observer-blinded trial reported in the New England Journal of Medicine on December 31, 2020 showed no fatalities among vaccine or placebo recipients and stated: "The safety profile of (the shot) was characterized by short-term, mild-to-moderate pain at the injection site, fatigue, and headache. The incidence of serious adverse events was low and was similar in the vaccine and placebo groups."

A follow-up study of the vaccine's first six months of usage published on November 4, 2021 in the same medical journal showed similar results on its safety and efficacy.

"None of these deaths were considered to be related to BNT162b2 by the investigators," the journal said, referring to the vaccine. "Causes of death were balanced between BNT162b2 and placebo groups."

AFP Fact Check has debunked numerous other inaccurate claims about vaccines and Covid-19.