"[Breaking] The Pacific nation of Palau changed its official name to Neo-Korea," reads the Korean-language thumbnail of a YouTube video link posted on Facebook on August 8, 2022.

"[We] are working to change our country's name to Neo-Korea," the text in the graphic adds. "Palau's president made a choice that will be remembered in history." 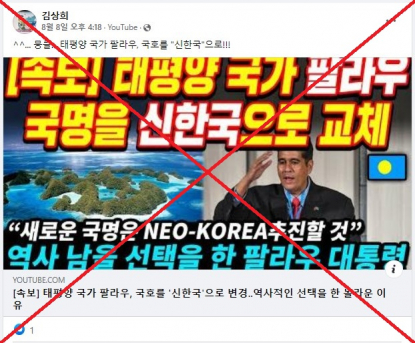 Screenshot of the misleading claim shared on Facebook, captured on August 23, 2022

The YouTube video has racked up more than 760,000 views since it was posted on August 8.

It also contains a voice-over claiming in Korean that "Palau, an island country in the Pacific, stepped forward to announce it will be changing its name to 'Neo-Korea'," in order to "recognise South Korea as [the country's] saviour."

The narrator goes on to say the Korea Aerospace Research Institute's decision to build an aerospace tracking station on Palau in 2021 and humanitarian activities there prompted the Pacific island nation to change its name to honour South Korea.

The same claim was repeated in other YouTube videos here and here that have been viewed more than 160,000 times, as well as in graphics shared on Facebook here and here.

'No truth to the claim'

Jeffrey Antol, director of Palau's Bureau of Foreign Affairs and Trade, dismissed the claim as false in an emailed response to AFP's inquiry on August 23.

He quoted the country's Minister of State Gustav Aitaro as saying "there is no truth to the claim that the Government of Palau has intentions to change its name to 'Neo-Korea".

There are also "no plans to change Palau's name", Aitaro was quoted as saying.

As of August 23, AFP found no official reports or announcements about Palau changing its official name.

Recent documents posted on the Palauan government's official website, including an announcement about a tax reform plan to take effect in January 2023, continue to refer to the country as the Republic of Palau.

The embassies of Australia, Japan, Taiwan and the United States in Palau all refer to the country as the Republic of Palau.

Palau is one of the few countries to maintain formal diplomatic ties with Taiwan.