As monsoon floods swept across parts of Myanmar in August 2022, a photo of an entrance gate to a township submerged in water circulated in posts that claimed it was taken in north-western Sagaing region. However, the photo was taken in 2015. A spokesman for a local rescue service said there had been no flooding in Sagaing, as of August 19.

"The storm will be fierce tonight. Sagaing has flooded. This is important storm news," reads a Burmese-language Facebook post shared on August 14.

The Facebook post links to a blog article which shows a photo with the text overlay: "Sagaing has been flooded. The storm is coming tonight. Reposting this because it is important news." 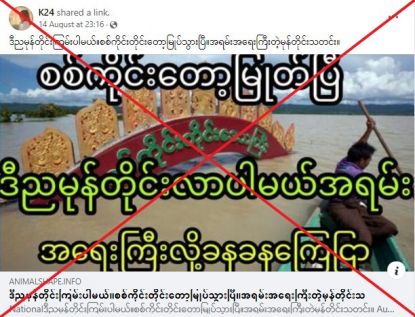 Screenshot of a post sharing the false claim, taken on August 22, 2022

The photo was widely shared in similar social media posts, including on Facebook here, here and here, in a blog article and in a YouTube video with more than 120,000 views that claimed Sagaing had been "submerged".

While monsoon rain triggered severe flooding in parts of Myanmar, including the commercial hub Yangon and the central Mandalay region, AFP found no official reports about floods in Sagaing.

A spokesman for Sagaing's Emergency Rescue Service said "there was no such flood" in the region.

"We have a regular rise of water level, but there is no serious flooding. We usually dispatch rescue efforts if there are floods, and there have been none this year," he told AFP on August 19.

A reverse image search on Google traced the photo to the website of The Associated Press news agency, which said it was taken in August 2015.

The photo caption reads: "A man rows his boat by the entrance signboard of Kalay township submerged in water, in Sagaing, Myanmar, Sunday, August 2, 2015."

Here is a screenshot comparison of the photo shared in false posts (top) and on The Associated Press's website (bottom): 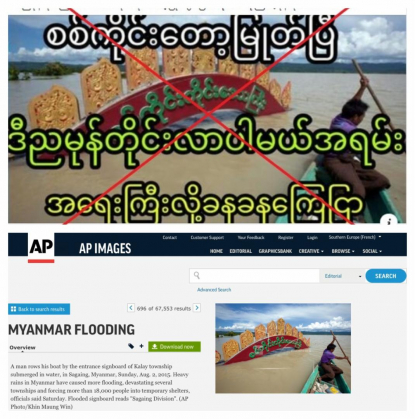 More than 100 people were killed by the flooding in Myanmar following weeks of torrential rain, with nearly one million people affected.

Floods from the heavy monsoon season cut through swathes of South and Southeast Asia, claiming hundreds of lives and displacing millions.

AFP published various photos of flooding in the Sagaing region at the time, including the gate of a monastery and the city hall in Kalay inundated by floodwaters.

Myanmar's then-president Thein Sein declared several regions to be disaster zones as a result of the flooding.