Malawi did not add South Korean symbol to national flag

Social media posts widely shared in South Korea claim Malawi changed its national flag to add the yin and yang symbol featured on the South Korean flag to demonstrate its friendship with the Asian country. However, Malawi's information ministry said on April 22, 2022 that the flag had not been changed, while recent photos of the flag at official events do not show any modifications.

The text adds: "[Malawi] will show it is the country in Africa closest to South Korea. The Taegeuk symbol becomes a symbol of democracy." 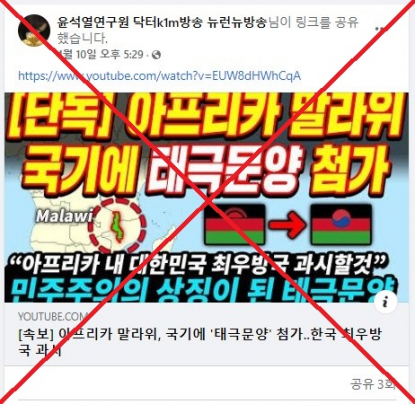 Screenshot of the misleading claim shared on Facebook. Captured April 24, 2022.

The YouTube video racked up more than 490,000 views since it was posted on April 10.

The seven-minute video features various pictures of Malawi. A man narrating the video says in Korean that Malawi "added the Taegeuk symbol" to its national flag "to demonstrate it is a close friend to South Korea".

He says South Korea's sale of K2 rifles to Malawi and humanitarian activities there prompted the African country to adopt the symbol into its flag.

The same graphic was shared on Facebook here, here and here; and on Naver Blog here.

The claim about the Malawian flag adopting South Korea's Taegeuk is also false.

Malawi's national flag features a black, red and green stripe with a red half-sun emblem on the top black stripe. 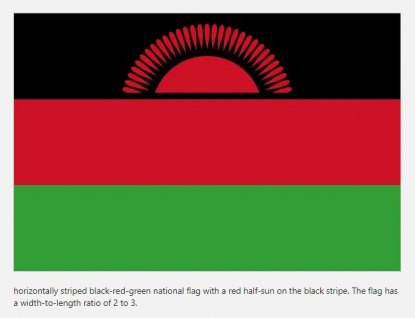 The country changed its flag in 2010 -- replacing the half-sun with a full-sun banner in the centre - before reverting back in 2012 to the older flag used since independence in 1964.

Malawi's Minister of Information and Digitalization Gospel Kazako said dismissed the claims that the country's flag had been modified as "false".

"We have not changed our flag in any way recently," Kazako told AFP on April 29, 2022. "This [Taegeuk] symbol is not part of our national flag."

He said there had been no alterations to the country's flag since 2012.

As of April 5, 2022, AFP found no credible reports or official announcements about Malawi changing its national flag since 2012, including adding South Korea's Taegeuk.

Furthermore, recent photos of government events attended by Malawian representatives show the county's red half-sun flag remains in use, with no visible additions made to it.

The flag was photographed at a meeting on March 18, 2022 attended by Malawi's President Lazarus Chakwera and US Secretary of State Antony Blinken. 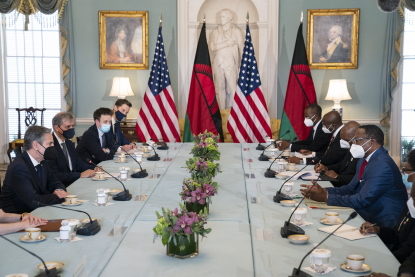