An image appearing to show outgoing South Korean President Moon Jae-in -- who pursued a policy of engagement with North Korea during his term -- confronted with a placard that says he "must die" and "screw off to the North" has been repeatedly shared in Korean-language social media posts. But the placard has been digitally doctored: it originally showed a message asking Moon to support local merchants.

The image was shared on Facebook on May 1, 2022 alongside a Korean-language claim that merchants in a market in the South Korean city of Daegu have "turned against" President Moon Jae-in.

The image appears to show a smiling Moon looking at a sign held up by a woman in a market that translates as: "You must die for the country to live. Screw off to the North!"

During his five-year term, the dovish Moon held three summits with North Korean leader Kim Jong Un -- a policy of engagement that critics said had seen Seoul make too many concessions to its wayward neighbour. 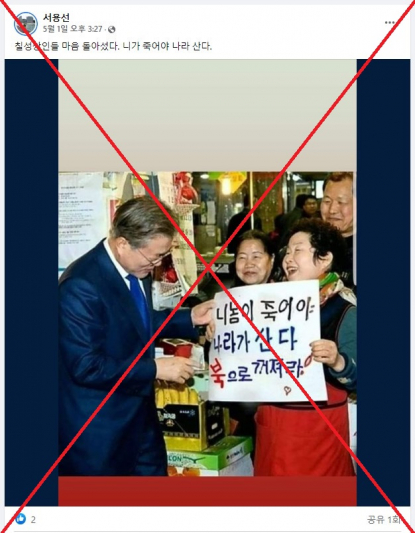 Comments to the posts suggest some users believed the placard in the image was genuine.

One user wrote: "Amazing. These grannies are patriots."

"I completely agree. Moon is the North's spokesman and surrogate," another commenter wrote.

Through a Google reverse image search, AFP was able to trace the image to a photo posted on March 22, 2019 by Hyoja-dong Studio, a photo website operated by the country's Presidential Security Service.

The photo shows a woman holding a sign that translates as: "Only if the market lives can the country live. Please help us!"

The photo’s caption says it was taken during a visit to Chilseong Market, which is in Daegu.

Below is a screenshot comparison of the doctored image shared on Facebook (left) and the original photo published by Hyoja-dong Studio (right). 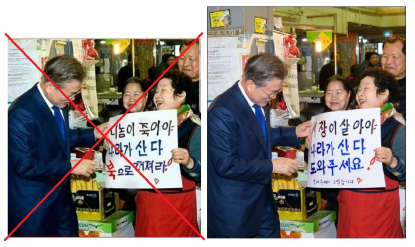 A screenshot comparison of the doctored image shared on Facebook (left) and the photo published by Hyoja-dong Studio (right).

Moon can also be seen looking at the same sign in a YouTube video posted by the Blue House, South Korea's presidential office, on March 24, 2019. The sign can be seen at the six-minute 28-second mark.

Photos of the woman holding the sign were published in local media outlets Yonhap News and Edaily.

Media reports of Moon's visit to the Daegu market indicate he received a remarkably warm reception in the city, which has traditionally been a conservative stronghold that tends to vote against his party.