An image purporting to show South Korean President Moon Jae-in writing a pro-North Korean message on a wall has resurfaced on Facebook. The image, however, has been doctored. The original photo shows Moon writing a pledge to improve safety conditions in South Korea.

The picture appears to show Moon writing on a structure: "[I] will not let a single [North Korean flag] be burned because of a South Korean person."

The post's Korean-language caption translates to English as: "Look at what this commie is doing. This is why the country is this way because you turn the people on each other. You will be a communist even after you are dead". 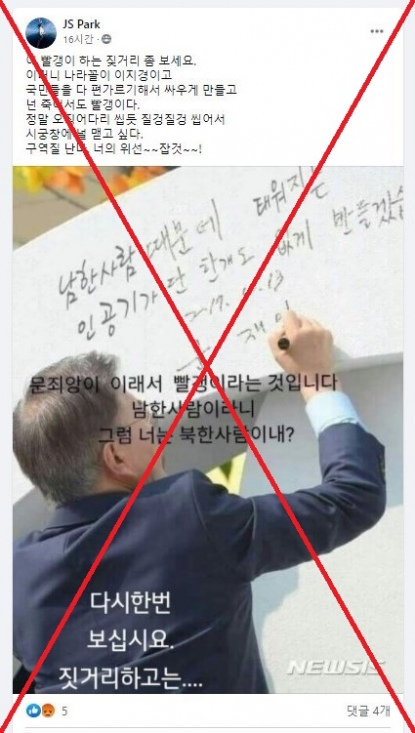 Moon's opponents have often accused him of having secret ties with North Korea.

The image, which has circulated on social media since at least 2018, resurfaced on Facebook in recent months here, here, here and here.

In the original image, the Korean-language text Moon can be seen writing translates as: "[I will] build a country where no citizen sheds tears due to safety."

The photo caption reads: "The Democratic Party of Korea's presidential candidate Moon Jae-in writes a phrase containing a public pledge to build a safer country at Gwanghwamun Square on the 13th. 2017.04.13." 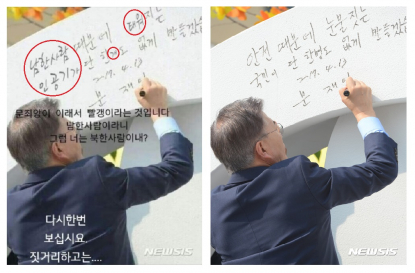 A similar photograph taken from a different angle by Yonhap news agency shows Moon writing the same phrase on a sculpture in Seoul's Gwanghwamun Square on April 13, 2017.

He was attending the third anniversary of the Sewol ferry disaster, according to the photo caption.

This YouTube clip uploaded by a civic group shows Moon writing out the entire phrase as depicted in the original Newsis photo.

AFP has previously debunked numerous other doctored images of Moon, including here and here.