A photo of South Korean President Moon Jae-in shared repeatedly in multiple Facebook posts purports to show him holding a placard that criticises the United States and promotes Pyongyang’s nuclear programme. The image, however, has been doctored. The original photo, published in October 2015, shows that Moon was holding a placard opposing plans to introduce state-authored history textbooks.

Korean text superimposed on the image reads: “This pathetic person is now president... A henchman of insane Kim Jong-un.” 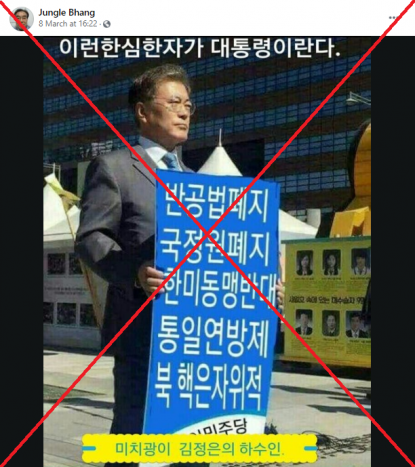 The same image has been shared on Facebook alongside a similar claim here, here and here.

In the image, Moon is holding a banner that reads: “Opposing textbooks that distort history.”

The photo's caption reads: “Moon Jae-in, head of The New Politics Alliance for Democracy is holding a solo vigil to protest against the government's plan for nationalisation of history textbooks on the 12th.”

In October 2015, South Korea announced the introduction of government-approved history textbooks for middle and high-school students, prompting concerns about a  throwback to the country’s authoritarian past, as AFP reported here.

The policy was scrapped under Moon’s administration on May 12, 2017. 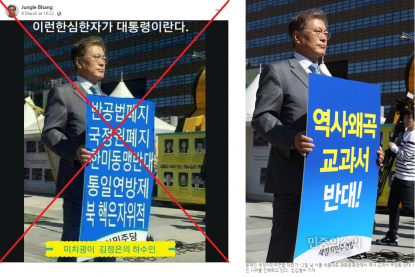 Screenshot comparison between the photo seen in the Facebook misleading post (L) and the original image published by Voice of People (R).

A clip published on Voice of the People’s YouTube channel shows Moon holding a banner to protest against the government’s plan for nationalisation of history textbooks. It was published on October 12, 2015. 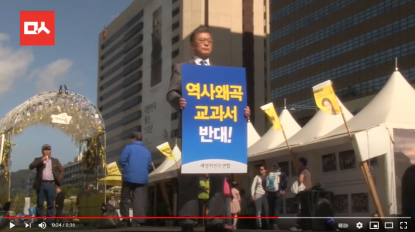 Screenshot of the recorded clip published by Voice of people, captured on March 30, 2021.

Moon’s protest and the placard can be seen in other reports by South Korean media outlets, including JoongAng Ilbo and Yonhap News Agency.