An image that purports to show a campaign slogan from Seoul mayoral candidate Oh Se-hoon that states he vows to resign has been shared in multiple Facebook posts in March 2021. The image, however, has been doctored: the original photo shows a slogan touting Oh's accomplishments; a spokesperson for Oh’s party also told AFP that the slogan seen in the manipulated image is fake. 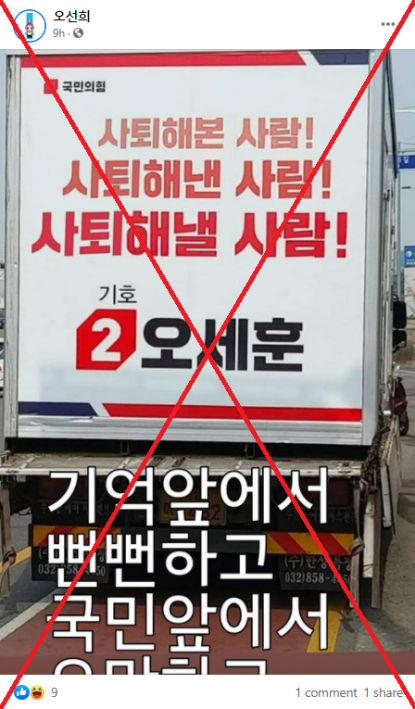 The Korean-language slogan printed on the back of the vehicle seen in the photo reads: “People Power Party. [I am] The one who has resigned. The one who managed to resign. The one who will resign. Candidate number 2. Oh Se-hun.”

The Korean-languge text superimposed on the photo reads: “Brazen and arrogant in front of people. Makes me want to vomit. Get lost.”

South Korea is set to hold mayoral elections in two cities, Seoul and Busan, on April 7, 2021. Oh is one of the leading candidates for the post of Seoul mayor and is backed by the country’s main opposition People Power Party.

A reverse image search on Google found the original was published here on March 26, 2021, by South Korean online newspaper OhmyNews.

The Korean-language text written on the backside of Oh’s campaign vehicle seen in the original photo reads: “People Power Party. [I am] The one who has accomplished. The one who managed to accomplish. The one who will accomplish. Candidate number 2. Oh Se-hun.”

Below is a screenshot comparison between the photo seen in the misleading Facebook post (L) and the image published by OhmyNews (R):

Screenshot comparison between the photo seen in the misleading Facebook post (L) and the image published by OhmyNews (R).

A spokesperson at the People Power Party also said that the image seen in the misleading Facebook post is fake.

“The party has never used such a slogan for any of Oh’s campaign vehicles,” the spokesperson told AFP on the phone on March 29, 2021.