Skip to main content
A gas station worker adjusts a prices board on April 21, 2020 in Arlington, Virginia (AFP / Olivier Douliery)

Gas station message about high prices not affiliated with ExxonMobil

Facebook posts shared tens of thousands of times feature an image of an Exxon gas station sign with a message blaming high fuel prices on US Democrats. But the price shown for regular gas does not reflect market data, the picture is the same as a customizable photo from a “Make your own Gas Station Sign” website, and the oil company says it is not affiliated with the message.

A March 7, 2021 Facebook post shared more than 30,000 times includes the image, which shows gas prices posted above a sign with a message criticizing Democratic Party voters.

Conservative author and filmmaker Dinesh D’Souza, who former president Donald Trump pardoned in 2018 after his conviction for campaign finance violations, posted the picture with the caption: “You get what you vote for.” 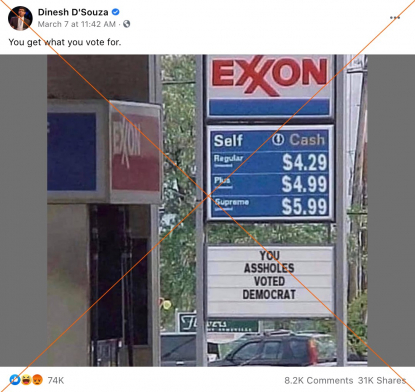 Other posts containing the image appear on Facebook here and here.

ExxonMobil spokesman Jeremy Eikenberry told AFP in an email: “The image and social media posts are not affiliated with ExxonMobil in any way.”

AFP Fact Check conducted a Google reverse image search for the photo in the post that led to a website on which users can input gas prices and a message on the sign. 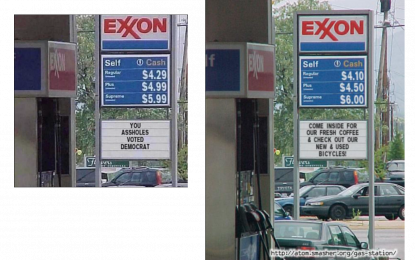 While the picture on Facebook appears to have been cropped from the website version, it shows the same scene.

According to data provided by AAA (American Automobile Association), average national gas prices have not surpassed $3 per gallon for regular fuel between 2018 and today. 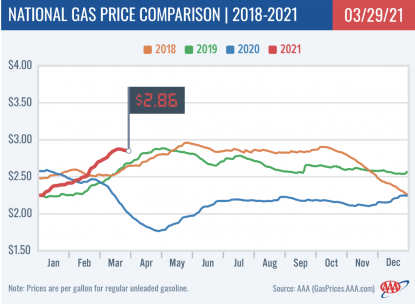 The US Energy Information Administration publishes data on gasoline prices based on weekly surveys, and this graph does not show any prices as high as that in the image between March 2020 and March 2021.

Comments attached to the posts indicated that readers believed the photo and its message to be real.

“It would be great if only those who voted for Biden have to pay this and the rest of us don't,” one user commented on D’Souza’s post.

Another user replied to a similar post, saying “Thank all of you Democrats for making this possible and putting thousands of oil workers out of work. You should feel very proud of yourself and your socialist party!”

AFP recreated the image shown in the post here, and in February 2021 debunked the claim that administration policy is responsible for higher gas prices here.

While prices at the pump have risen since January 2021, experts attribute this to a gradual recovery from very low crude oil costs during a downturn caused by the coronavirus pandemic, and they are now headed upward.

“The rise in prices is a function of the recovering demand for gasoline as the nation mends from Covid-19 and adapts,” Patrick De Haan, Head of Petroleum Analysis at GasBuddy.com, a website that tracks prices in all 50 states, said via email in the February fact check.

Energy and security analyst Patricia Schouker agreed. “A booming rally in oil markets has pushed crude prices to their highest levels since near the start of the coronavirus pandemic, powered by production curbs and recovering demand,” she said in the same fact check.

“Because of the massive drop in fuel consumption related to the pandemic that has only partly come back, gasoline demand dropped 5.7 percent comparing President Trump’s first week in office to his last. Again, it comes down to supply and demand.”