A video has been viewed hundreds of thousands of times in Facebook and Twitter posts claiming it shows “dead bodies piled up from Covid”. One of the purported corpses can be seen smoking a cigarette, prompting claims that he could be a “crisis actor”. The claims are false: the clip does not show coronavirus victims. It has circulated online in social media posts since September 2020 about the filming of a Russian music video.

The video was shared on Facebook here on March 31, 2021, by Advance New Zealand, a political party based in New Zealand. The video has been viewed more than 7,000 times. 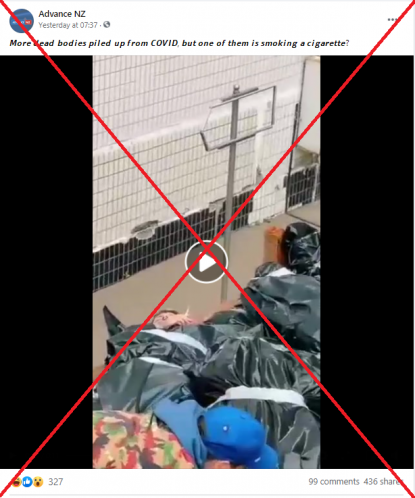 A screenshot of the misleading post, taken on April 1, 2021.

The video appears to show bodies wrapped in black bags, with a man lying among them smoking a cigarette.

The post’s caption reads: “More dead bodies piled up from COVID, but one of them is smoking a cigarette?”

Some Facebook users commented on the video claiming that the man is a “crisis actor”, referring to someone paid to play the role of a disaster victim.

The video was shared here, here and here on Facebook, and has also been viewed hundreds of thousands of times on Twitter here and here alongside a similar claim.

However, the claim is false; the video in fact previously circulated online in posts about a music video filmed in Russia.

The video was taken from this longer TikTok clip posted on March 29, 2021 by a Russian user called Vasya Ivanov.

Ivanov describes himself as a production designer and art director on his profile.

Below is a screenshot comparison of the video in the misleading posts (L) and Ivanov’s TikTok video (R): 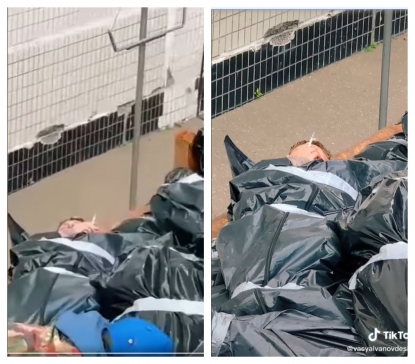 A screenshot comparison of the video in the misleading posts (L) and Ivanov’s TikTok video (R).

While the clip of the man smoking does not appear in the actual music video, the background can be seen at the 02:23 mark of the video that Ivanov posted on Vimeo on November 26, 2020. It shows the same orange-coloured truck, bin bags and wall fixture.

Screenshots of the TikTok clip and the music video, with corresponding elements circled by AFP

The filming of the music video was covered by Russian media organisation Ren.tv on September 4, 2020. Mannequins wrapped in body bags were used for the music video, Ren.tv reported.

The music video was filmed on this street in the Russian capital Moscow.

AFP previously debunked other misleading claims about the filming of the same music video here and here.