This video shows the filming of a music video in Moscow

A video has been viewed thousands of times in multiple posts on Facebook and Twitter alongside a claim it shows 200 bodies of dead novel coronavirus victims being lowered into a garbage truck in Russia. The claim is false; the clip shows the filming of a rap music video in the Russian capital of Moscow.

The post's Indonesian-language caption translates to English as: “In Russia they buried 200 bodies altogether.

“There was one apartment where all residents died, ten bodies were lowered together to an already full truck.

“O God, please protect us all from this COVID-19 outbreak.” 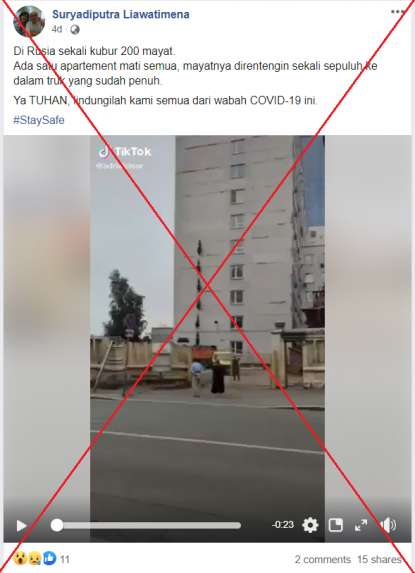 Several people can be heard speaking Russian in the clip. Their comments can be translated as: “I think it’s people”; “Look, there is the head, the legs” and “They are very light”.

The clip has been viewed more than 1,500 times on Facebook here, here, here, and here; as well as on Twitter here alongside a similar claim

Other posts, published here and here, have circulated on Facebook alongside a claim that the incident occurred in Italy.

The same clip was also shared with a similar claim in Malaysian language here; and in Arabic here and here.

The clip in the misleading posts contains a watermark for a TikTok account @adrialclear. The TikTok account posted the same video, with added background music, on September 20, 2020. The video's Russian-language caption translates as: “18+ sensational video that was deleted and many have not seen yet”.

Translated from Russian to English, the 50-second clip’s title reads: “Incredible scenes at the M. Vladimirsky Clinical Institute in Moscow”.

The caption reads: “And such incredible scenes today are at the M. Vladimirsky Clinical Institute (MONIKI) in Moscow. Passersby thought that someone was stealing corpses from the local morgue, but everything turned out to be much less creepy. The shooting of the music video is in progress.”

Below is the screenshot comparison between the clip in the misleading post (L) and Mash’s video (R): 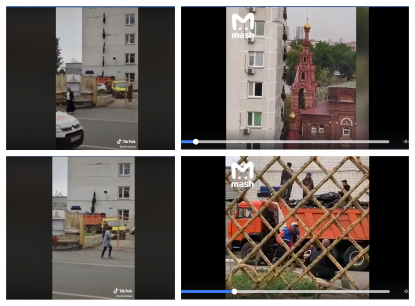 Translated from Russian to English, the report‘s headline reads: “‘Dead people’: Muscovites were frightened by ‘corpses’ hanging from the roof of the hospital”.

The report's first three paragraphs reads: “The attention of residents of the capital passing by Shchepkina Street today turned to the ‘corpses’ that have appeared on the wall of the Moscow Regional Research Clinical Institute (MONIKI), next to the Church of the Icon of the Mother of God, Joy of All Who Sorrow.

“It turned out that the ‘performance with corpses in sacks’ is an artistic image. In the area of the hospital, a new music clip of rapper Husky is currently being filmed. The REN TV correspondent talked with the producer of the project, and also got the opinion of the townspeople, who were clearly surprised by what was happening.

“Producer Mikhail Marizov noted that mannequins are used in the work. According to him, the film crew received all the necessary permissions to create the clip.”

The buildings seen in the clips match the buildings of Moscow Regional Research and Clinical Institute (MONIKI) and the church on Google Street View here.

The Russian headline and subheadline translate to English as: “Muscovites are shocked by the ‘corpses in bags’ on the wall of the hospital. It turned out all for the sake of art.

“The eerie scene turned out to be the properties for the music video.”