A video of a large crowd marching through the street has been viewed thousands of times in multiple Facebook posts that claim the footage shows demonstrators in the Indian city of Kolkata chanting Islamic slogans. The claim is false; the video actually shows a protest in Bangladesh against the treatment of Rohingya Muslims in Myanmar in September 2017.

The video was published on Facebook here on August 28, 2020.

The post’s caption reads: “This is not Karachi, Kashmir or Kerala. No, this chant of ‘Islam Zindabad’ is being raised in Kolkata, capital city of #MamataBanerjee-ruled #WestBengal !”

The post’s hashtags refer to Mamata Banerjee, the chief minister of the Indian state of West Bengal. Kolkata is the capital city of the state.

The video was also shared alongside similar claims on Facebook here and here, and on Twitter here.

Islami Andolon Bangladesh is an Islamist political organization in Bangladesh. 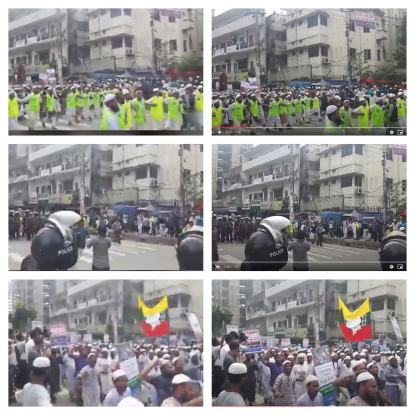 On multiple days in September 2017, tens of the thousands of people marched in the Bangladeshi capital of Dhaka to protest violence against Rohingya Muslims in Myanmar, as AFP reported here.

Kolkata police also took to Twitter on August 28, 2020, to refute the claim, saying it is “false” and “fake news”.

#FakeNewsAlert
A video clip from Bangladesh is being falsely claimed to be from Kolkata. Legal action initiated. pic.twitter.com/v5MYLICKiI