This image of Manila Bay has been doctored

An image purporting to show a long, pristine beach has been shared hundreds of times in multiple Facebook posts alongside a claim it shows Manila Bay in the Philippines after a government makeover. The claim is false; the image has been doctored from a photo taken in September 2020 of a small artificial beach that was opened by the government along the harbour in Manila Bay.

The image was published on Facebook here on September 20, 2020. The post has been shared more than 100 times. 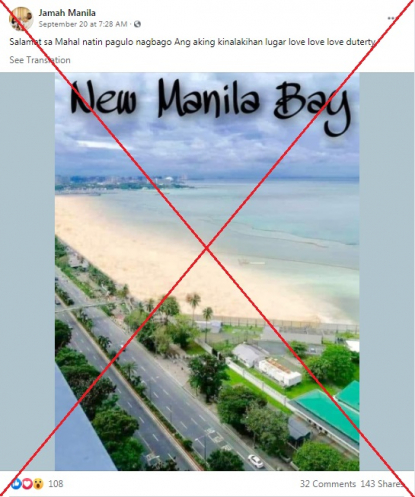 A screenshot of the misleading post, taken on September 22, 2020

The text superimposed on the image reads: “New Manila Bay”.

The post’s Tagalog-language caption translates to English as: "Thanks to our Beloved president the place I've grown familiar with has changed love love love duterty [sic]".

The post circulated the same day the Philippine government temporarily opened the artificial beach it had built along a portion of Manila Bay.

The same image was also shared alongside a similar claim on Facebook here, here, here and here.

The claim is false; the image has been digitally manipulated to make the beach appear longer and cleaner.

Reverse image and keyword searches on Google found the original photo was published on Facebook here on September 17, 2020 by News5, a Philippine news organisation.

Below is a screenshot comparison of the doctored photo (L) and the photo in the News5 post (R): 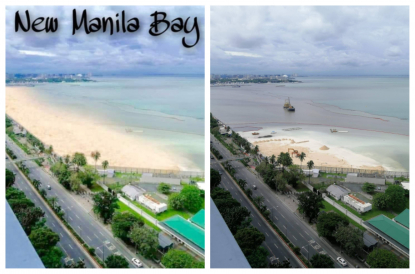 Aerial footage was also published on September 20 on YouTube here that shows the same artificial beach on the small portion of Manila Bay — not the long stretch seen in the doctored photo.