A photo has been shared thousands of times in multiple posts on Facebook and Twitter alongside a claim it shows Bollywood actor Amitabh Bachchan greeting organised crime fugitive Dawood Ibrahim. The claim is false: the photo has circulated online since 2010 in reports about Bachchan meeting former Maharashtra Chief Minister Ashok Chavan. 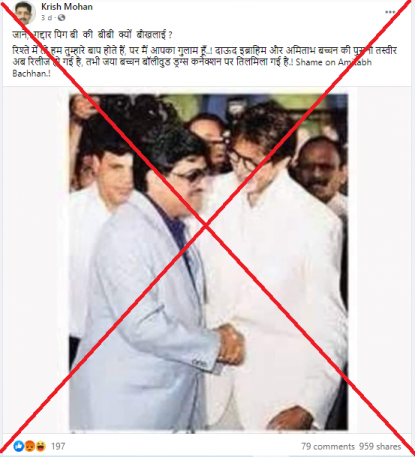 The post’s Hindi-language caption translates to English as: “I am your father in relation, but I am your slave. An old photo of Amitabh Bachchan with Dawood Ibrahim has been released now. This is why Jaya Bachchan was furious over talks of his drugs-connection. Shame on Amitabh Bachchan.”

Amitabh Bachchan is a senior Bollywood actor and “I am your father in relation” is a well-known line from one of his Hindi movies.

Dawood Ibrahim is one of India’s most wanted fugitives. He is accused of running major organised crime operations and supporting terrorist acts, including the 1993 serial bomb blasts in Mumbai. 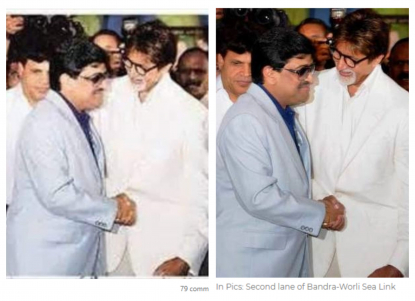 A reverse image search on Google also found this video report by Mumbai-based English language newspaper The Times of India. The report is about Bachchan attending the inauguration ceremony for the Banda-Worli Sea Link between west and south Mumbai on March 24, 2010, where he met Chavan.

Bachchan and Chavan, pictured sitting together, can be seen wearing the same outfits as seen in the misleading posts. Below is a screenshot of the video report with the two men highlighted in green by AFP: 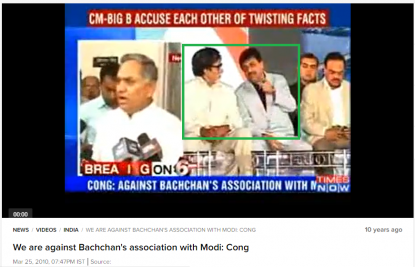 In response to the misleading posts, Bachchan's son Abhishek Bachchan, also a Bollywood actor, said in a tweet on September 18, 2020 that the image shows his father with Ashok Chavan.

“Brother, this photo shows my father and former Maharashtra Chief Minister Ashok Chavan,” says the tweet in Hindi, in response to another user’s tweet which has since been deleted.