Skip to main content
Victoria's state premier Daniel Andrews speaks during a press conference in Melbourne on September 6, 2020 as the state announced an extension to its strict coronavirus lockdown law. (AFP / William West)

An image has been shared hundreds of times in multiple Facebook posts which claim it shows a genuine quote from Australian politician Daniel Andrews, the current Premier in the state of Victoria. The claim is misleading; the purported quote originated in a satirical article published on September 15, 2020; in response to the misleading posts on September 21, the Victorian government separately denied Andrews made the purported remarks.

The image was published on Facebook here on September 17, 2020.

The purported quote is dated "September 2020". It reads: “In fact, you’d be surprised at how much can be avoided if people stop insisting on their personal freedoms. Because insisting on human rights is not only selfish, it’s stupid.”

The Facebook post's caption reads: "Is this idiot for real?" 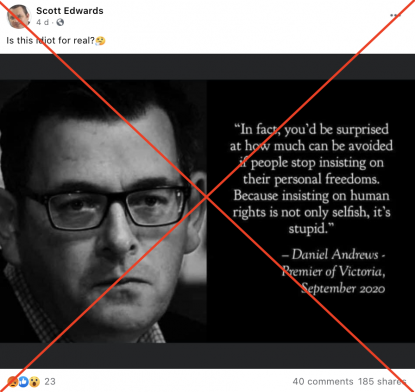 The posts circulated after Melbourne, the capital city of Victoria, continued its months-long effort to curb the novel coronavirus. Under strict measures extended on September 6, residents were ordered to stay at home except for work, exercise, medical care or to buy essentials.

A keyword search on Google of the purported quote found it was included in this satirical article published by the Australian edition of UK magazine The Spectator on September 15, 2020. The purported comment can be seen in the article's fourth paragraph.

The article notes at the top that “what follows is satire”. 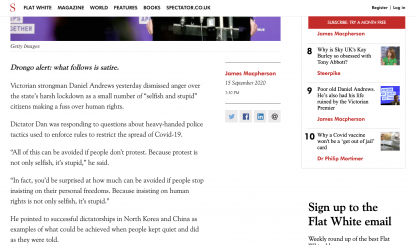 A screenshot of The Spectator’s article featuring the quote and a note, explaining the satirical nature of the article, as of September 21, 2020.

In response to the misleading posts, a Victorian government spokesperson told AFP that the quote was fabricated.

“This is not a comment from the Premier," the spokesperson said in an email on September 21, 2020.