A photo that purports to show South Korean President Moon Jae-in holding a card that displays a pro-North Korea message has been shared repeatedly on Facebook. The photo, however, has been digitally altered: the original shows an unrelated message that does not refer to North Korea.

It purports to show President Moon Jae-in holding a card with Korean-language text that translates to English as: “It is inappropriate to call North Korea main enemy. It’s the country of my grandfather and my homeland.” 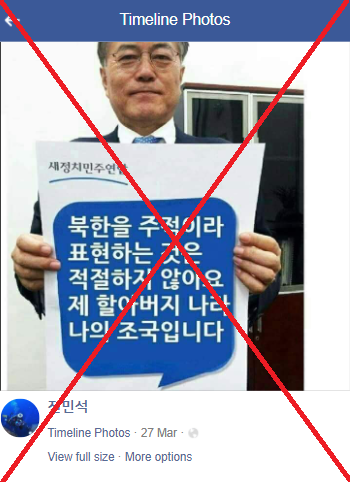 In 2018, the Moon administration stopped using the term, the report added.

An identical photo was also shared on Facebook here, here and here.

A reverse image search on TinEye found the original photo was published by Moon on his verified Twitter account on October 16, 2015.

In the original image, the Korean-language text on the card reads: “State-authored history textbooks are another name [form] of pro-Japan and dictatorship.”

Moon posted the photo in response to a government plan to introduce state-issued history textbooks for middle and high-school students. At the time, he was the head of the political opposition, reported the Yonhap News Agency.

Moon scrapped the textbooks when he became president in 2017, AFP reported. 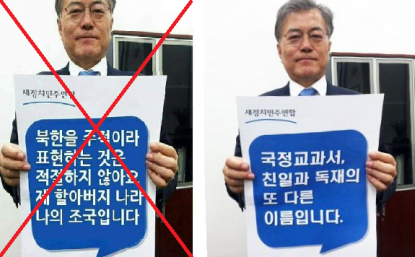 The doctored photo was previously debunked by an official South Korea government account after it circulated online in 2017.

Responding to a misleading post that shared the doctored photo, an election agency tweeted on May 6, 2017: “The election committee of Jeju City kindly informs you that the image you shared is fabricated and against the local election law.” 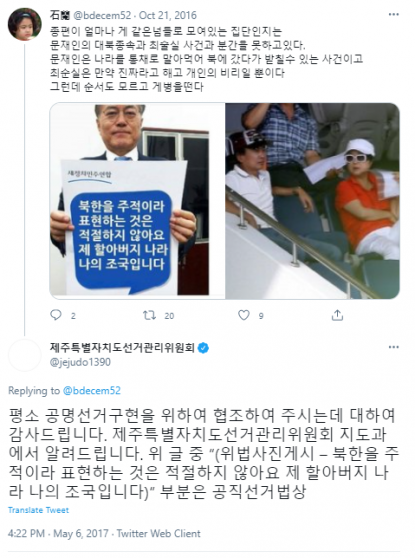