A video has been viewed thousands of times in multiple posts on Facebook and YouTube alongside a claim it shows a crocodile in the Indonesian province of East Nusa Tenggara after flash floods in April 2021. The claim, however, is false: the video has circulated online since at least April 2019 in social media posts about a crocodile spotted in Indonesia. 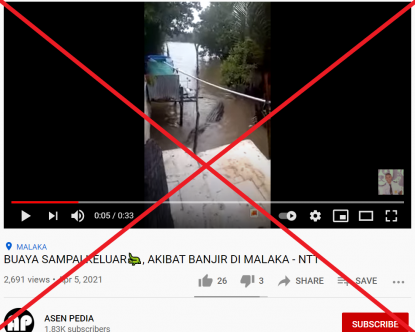 Translated to English, the Indonesian-language post reads: “A CROCODILE EVEN APPEARED 🐊, BECAUSE OF FLOOD IN MALAKA - NTT.”

Malaka, a regency located in Timor island, in Indonesia’s East Nusa Tenggara province, was badly affected by flash floods that hit the province on April 4, 2021, as reported by local media iNews and Okezone.

A reverse image search on Yandex found the video was previously posted here on the verified Instagram account of British naturalist broadcaster and author Steve Backshall on April 11, 2019.

In the Indonesian-language part of the post, Backshall thanks Aidil Putra, an Indonesian Instagram user based in East Kalimantan province, for the video.

Below is a screenshot comparison of the video in the misleading post (L) and the 2019 video on Instagram (R):

In an email to AFP on April 12, 2021, May said: “The clip Steve Backshall posted during our Borneo shoot in 2019 was not shot by our production team, it was shown to us by one of our boatmen during the shoot, we believe it was taken in his village (not as part of our shoot). We believe Steve was given the video by one of our local guides, in the Instagram post Steve thanks him for the video: ‘terima kasih @aidilputra17 untuk video’.

“[We] are not clear if Aidil (name checked by Steve as per the above) took the video or if it was one of his friends/colleagues, but he was happy for Steve to share. The crocodile was filmed on the very same river we were travelling on which is why Steve was so interested.”

Backshall’s expedition in the Indonesian part of Borneo was aired by US public broadcaster PBS in February 2020.