A video has been viewed tens of thousands of times in Facebook posts that claim it shows Indian politician Mamata Banerjee making a "secret" visit to a Muslim shrine. The posts go on to claim that Banerjee was "deceiving Hindus" as she seeks re-election in ongoing polls in West Bengal. The claim is misleading: Banerjee's visit to the shrine was streamed live on her official Facebook page and reported by local media.

The video’s Bengali-language caption translates as: “Mamata praying secretly with Muslims in the middle of the night in Nandigram deceiving Hindus before elections. This video was captured on a hidden camera, so I tell everyone to make it viral.” 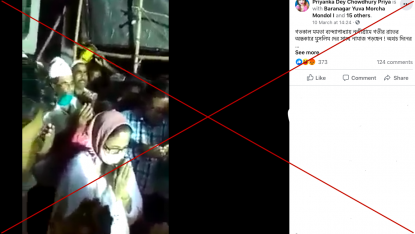 A screenshot of the misleading post, taken on April 8, 2021

She was set to contest the seat in Nandigram town against a former confidante who defected to the rival Bharatiya Janata Party (BJP), AFP reported.

The same video was also shared alongside a similar claim on Facebook here and here.

It was also shared by BJP members in Facebook posts here, here and here.

The claim is misleading: Banerjee’s visit to the Muslim shrine was streamed live on her official Facebook page, which has more than four million followers.

Keyword searches on Google found the video in the misleading posts corresponds to a longer video that was streamed live on her Facebook page on March 9, 2021.

The live video is captioned in Bengali: “Visit to a Muslim shrine.”

From the live video’s two-minute 38-second mark, Banerjee can be seen making an offering at the Muslim shrine.

Below are a set of screenshot comparisons showing the video in the misleading posts (L) and corresponding frames in the video streamed live on Banerjee’s Facebook page (R):

A video showing the same event was also aired by television network AajTak on March 9, 2021.

Photos of the visit have also appeared in reports by news organisations Asian News International and ABP on the same day.