A photo of a distraught girl has been shared hundreds of times in multiple posts on Facebook and Twitter alongside a claim it was taken in Myanmar as the military launched air strikes on villages in southern Kayin state. The claim is false: the photo was taken in Cambodia in 2007 by photographer John Brown.

“A little girl under Burmese army’s air strikes on villages,” the caption reads. 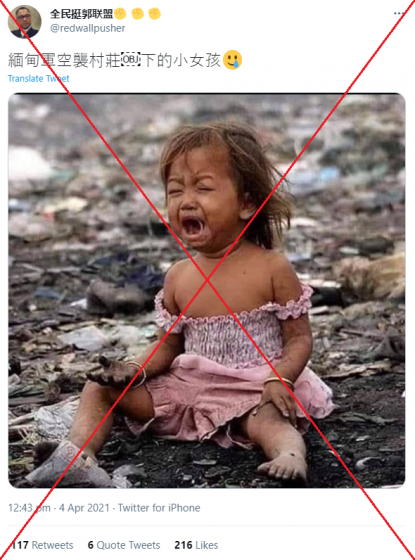 The claim, however, is false. The photo shows a girl in Cambodia in 2007. 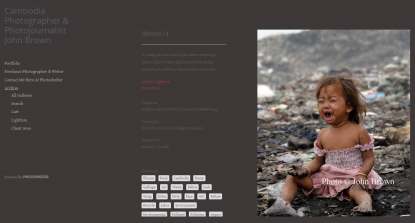 The photo is captioned: “A young girl cries out in pain after receiving a minor injury to her right hand at The Stung Meanchey Landfill in Phnom Penh, Cambodia.”

Contacted by AFP, Brown said he took the photo on January 15, 2007 in a former landfill in the Cambodian capital Phnom Penh.

He continued: “The little girl cut her finger while playing with glass. I moved in, took a couple more shots, then walked about 1/2 mile to a small makeshift store to buy 3 bottles of water. I then returned to the girl, gathered her up in my arms, & went searching for the girl's family. Suddenly, a woman ran up to me & took the girl in her arms while I wet my shirt tail & began washing her hand with my shirt. I then gave the woman the 3 bottles of water & continued my day shooting photographs".

Brown sent another two photos of the girl to AFP, which he said were captured on the same date in Stung Meanchey landfill. The images show a wider view of the same landfill and a close-up of the girl’s injured hand surrounded by flies.

Brown wrote about the same landfill in an article published here in 2008.