Skip to main content
People walk along a street during Lunar New Year festivities in Chinatown, New York on February 1, 2022. Lunar New Year has been celebrated since the late 19th century in New York City and this year is the year of the tiger, one of the 12 zodiac signs of the lunar calendar. ( AFP / Ed JONES)

Posts falsely claim that NYC's Chinatown was 'transformed' into Koreatown

"The surprising changes after the US transformed a dying Chinatown into Koreatown," reads the Korean-language claim, shared on Facebook here on April 5, 2022. 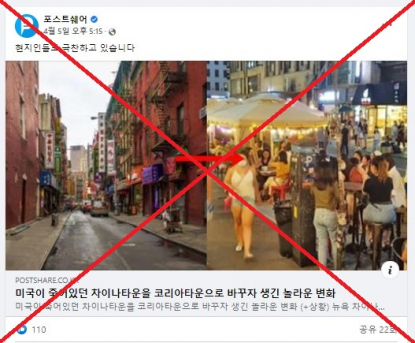 A screenshot of the misleading claim on Facebook. Captured April 14, 2022.

The posts shared a link to an article on Postshare, a South Korean-based news site.

The article claims that Chinatown became a "ghost town" due to growing crime rates and the Covid-19 pandemic, which it links to a supposed influx of Chinese people.

It goes on to say US government authorities -- including New York's governor -- transformed Chinatown into Koreatown, after which the neighbourhood regained "a cleaner city atmosphere".

The same article was shared alongside a similar claim on Facebook here, here and here.

Comments on these posts suggest some social media users were misled. "See here, we [Koreans] are this great," wrote one user. "Not surprising that everyone wants to avoid China," wrote another.

However, the claim is false; Chinatown has not been transformed into Koreatown as of April 18, 2022.

Located in lower Manhattan, New York City’s Chinatown is one of the United States' oldest Chinese enclaves, dating back to the 19th century.

Public notices from the neighbourhood civic association show it still exists as of April 18, 2022.

A spokesperson for New York City’s 1st City Council district, which includes Chinatown, told AFP: "There is no plan to replace [Manhattan’s] Chinatown with Koreatown.

"Koreatown is a different neighbourhood, not even that close to Chinatown".

New York City’s "Koreatown" refers to an area around 32nd Street between Broadway and Fifth Avenue in Manhattan.

According to the City College of New York, the neighbourhood dates back to the 1970s, when the first Korean businesses opened up.

The photos shared in the misleading posts show different locations in Manhattan.

A Google reverse image search found the photo on the left-hand side was published on the stock image website Shutterstock on December 11, 2016, alongside the caption "Chinatown Street".

Below is a screenshot comparison of the photo in the misleading Facebook post (left) and the photo published on Shutterstock (right):

A screenshot comparison of the photo in the misleading Facebook post (left) and the photo published on Shutterstock (right).

AFP geolocated the photo to Pell Street in Manhattan’s Chinatown.

The photo on the right-hand side corresponds to an image published in an August 24, 2020 report by Korea Business Daily, a South Korean newspaper.

The photo’s caption reads: "Manhattan’s Koreatown has recently become a landmark of New York City after it was designated as a 'no car street'.

"Even amid the Covid-19 economic crisis, people still flocked to Koreatown on the evening of the 21st last month. New York = Correspondent Cho Jae-gil."

Below is a screenshot comparison of the photo in the misleading Facebook post (left) and the photo published by Korea Business Daily (right):

A screenshot comparison of the photo in the misleading Facebook post (left) and the photo published by Korea Business Daily (right).

New York City also houses other neighbourhoods with a large number of Chinese residents, such as the Chinatown in Flushing, Queens, and parts of Brooklyn.

The greater Flushing area in Queens is also home to a Korean enclave.