After a Thai rapper sparked a surge in sales of mango sticky rice when she ate a bowl of the dessert on stage at Coachella festival, Facebook posts shared thousands of times claimed to show a photo of swathes of people queuing for the sweet treat in Las Vegas. However, the picture was actually taken at the Commonwealth Games in Australia in 2018, when sports fans joined a long wait for buses to travel to and from the opening ceremony.

"Live from Las Vegas, USA at 11.30 pm. Many people have come to queue up at the Asian market to buy mangoes imported from Thailand," reads a Thai-language Facebook post from April 17, shared more than 4,000 times.

Sales of Thai mangoes spiked after rapper Milli ate a bowl of the country's national dessert -- a combination of glutinous sticky rice mixed with coconut milk and mango -- as she wrapped up a performance on April 17 at Coachella festival in California. 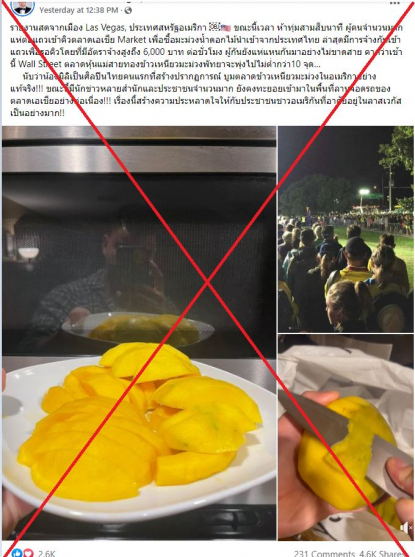 Screenshot of the misleading image captured on April 18, 2022

A string of Facebook posts shared the photo alongside the same claim, including here and here. It was also published in a news report about "foreigners" lining up to buy mango sticky rice.

A reverse image search found the photo in a report from April 5, 2018 by Australia's ABC News about sports fans demanding their money back after a "two-hour wait" for buses at the Commonwealth Games in Queensland.

"Commonwealth Games organisers have been criticised after thousands of people faced lengthy waits on their way to and from last night's opening ceremony at Carrara Stadium on the Gold Coast," ABC News reported. 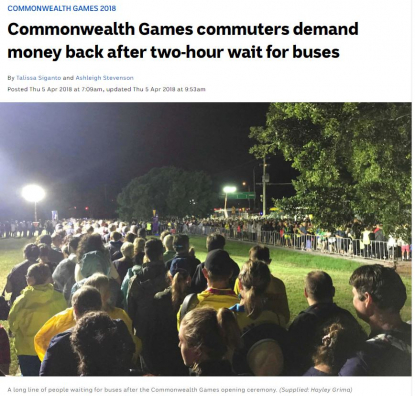 Screenshot of the photo in ABC News's article from April 2018

Various news outlets reported on public transport delays around the opening ceremony, including here and here, which was held on April 4, 2018.

The area where the photo was taken can be seen here and here on Google Street View from different angles.

The green road sign, white fence and trees shown on the map correspond to the features seen in the photo.

AFP did not find any credible reports of people queueing up for Thai mangoes in Las Vegas after Milli's stunt.