This video shows deployment of anti-riot police at Jakarta protest in 2019, not 2022

A video has been viewed tens of thousands of times in multiple social media posts alongside a claim it shows police officers being deployed ahead of a protest in the Indonesian capital of Jakarta in April 2022. However, the clip has been shared in a false context; the footage shows police officers being dispatched to a protest in May 2019 in Jakarta.

The video showing police in anti-riot gear marching down a street was posted here on Twitter on April 10, 2022, where it has been viewed more than 92,800 times since.

The Indonesian-language caption translates as: "Keep it up, Mr Policemen..

"We, the people of Indonesia, are currently on highest alert. We are ready to help keep peace. Currently, some of the 'Silent Majority' have joined the ranks of the radicals who will hold the 'TREASONOUS' protest tomorrow.
KEEP IT UP....!!!" 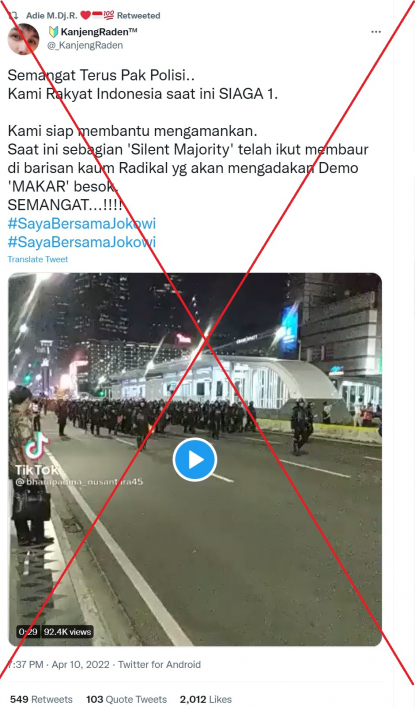 The post was uploaded a day before thousands of university students took to the street in Jakarta on April 11, 2022 to protest against extending the presidential term limit as rumours swirled about a potential change to the country's constitution.

For weeks, senior ministers and several political parties have been suggesting the 2024 elections should be delayed and the constitution amended to allow presidents to serve more than two terms.

A combination of reverse image and keyword searches on Google found that the original video was uploaded by the Jakarta Police Traffic Management Center on its Twitter account on May 22, 2019.

Translated to English, the Indonesian-language tweet partly reads: "The police and the military are ready to maintain security and stability during processes of the 2019 election and after.

"The police and military will not tolerate and will take firm action against any efforts that will disturb public order and unconstitutional actions that ruin the democratic process.

Peaceful protests started on May 21, 2019, shortly after the Indonesian election body announced that President Joko Widodo won a second term the previous month -- the results were rejected by his rival Prabowo Subianto and his supporters, AFP reported here.

Below is a screenshot comparison between the video in the misleading post (L) and the original footage posted by the Jakarta police on Twitter (R): 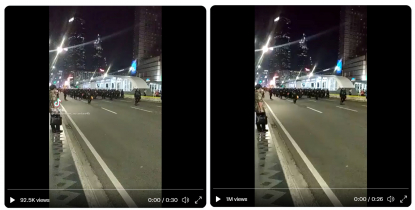 News outlet Berita Satu published a screenshot of the original footage on May 22, 2019, in a report about the overnight clash, crediting the picture to the Jakarta Police Traffic Management Center.

The photo's caption reads: "Police officers on guard around the General Election Supervisory Agency building on May 21, 2019."