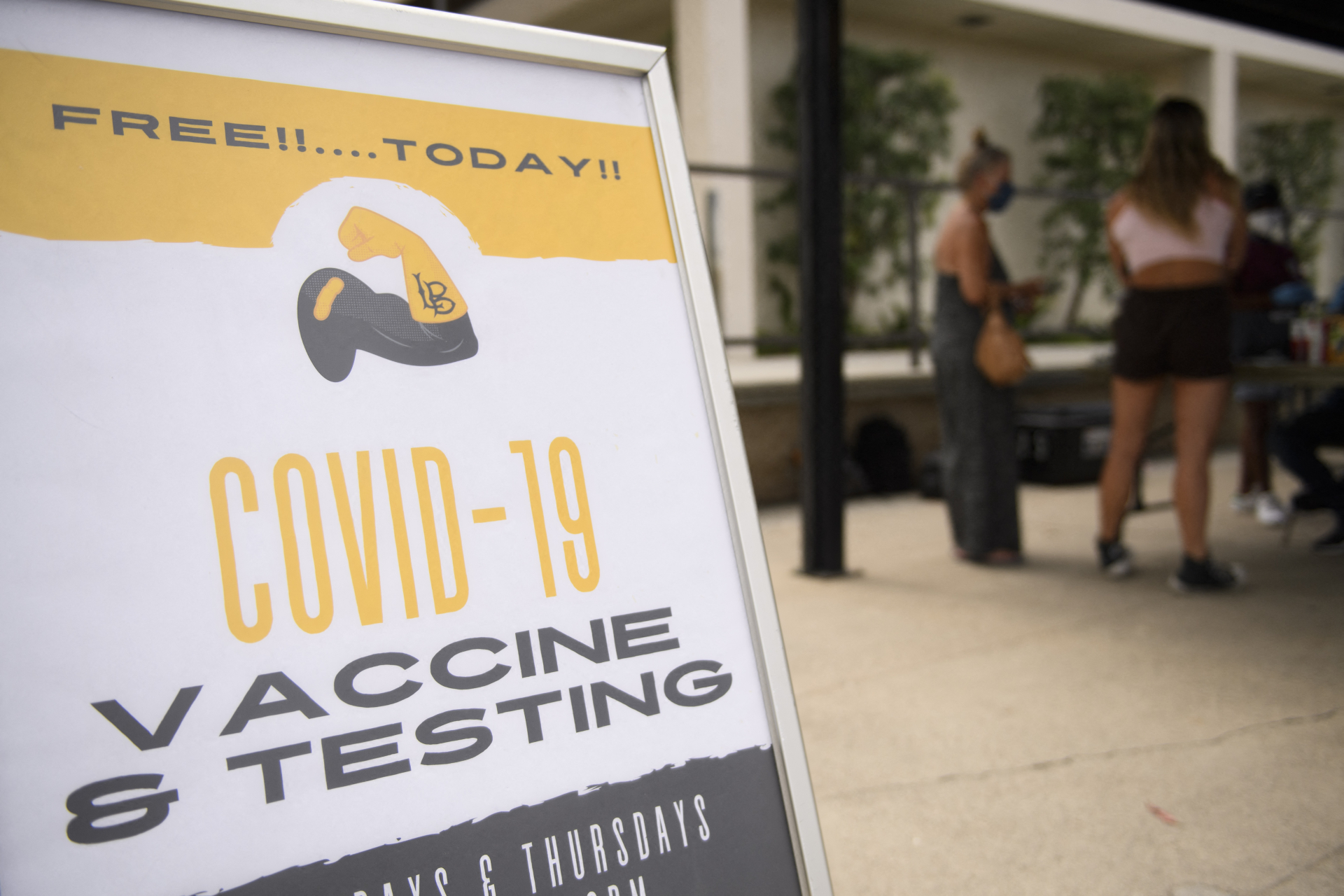 Experts have rejected false claims by a US doctor regarding the safety of mRNA vaccines (AFP / Patrick T. Fallon)

A video shared on Facebook in which an American doctor makes several claims about mRNA vaccines against Covid-19 has been viewed nearly 900 times in Ethiopia. But the doctor’s claims are false, experts told AFP Fact Check. The Pfizer-BioNTech and Moderna vaccines that use mRNA technology are considered safe, and millions of doses have been administered.

The Facebook post features a 17-minute video of an American doctor, Ryan Cole, making several false claims about mRNA vaccines, including that they are toxic and that the spike protein in the vaccine causes “the same disease as Covid-19” and damages vital organs.

The video has been viewed more than 900 times since it was posted on Facebook on August 3, 2021. The caption of the post is written in Amharic.

“The fact that many are against the Covid vaccine isn’t unfounded. Listen to what science has to say about it from this doctor. For those of you who are not vaccinated, it’s still not too late,” part of the translated caption reads.

Cole, a dermatopathologist and owner of a medical laboratory in the US state of Idaho, is known for his anti-vaccine stance. Other fact-checking organisations have previously debunked claims made by Cole (see here and here).

This latest viral video of Cole was recorded during a summit for American Frontline Doctors (AFLD) held in Texas on July 27, 2021. The group claims to be an impartial non-profit organisation, but is known for spreading misinformation about Covid-19.

In the video, Cole focuses on mRNA vaccines, such as those developed by Pfizer-BioNtech and Moderna.

Their technology differs from traditional vaccines. Instead of injecting weakened or dead forms of a virus, causing the immune system to recognise the virus and build antibodies, mRNA vaccines deliver instructions to cells to build a harmless piece of the “spike protein” found on the surface of the virus that causes Covid-19. After creating this spike protein, cells can recognise and fight the real virus.

In his speech, Cole claims that after an mRNA vaccine is injected, “the spike protein doesn’t stay just in the deltoid, the spike circulates in your blood and lands in multiple organs”.

Citing an unnamed study on laboratory animals, Cole further claims that the spike protein created in the mRNA vaccine causes the same diseases as Covid-19.

“S[pike] protein does not ‘circulate’ in the body,” Dr. Oliver Stojkovic, a geneticist and professor at the Medical Faculty of the University of Belgrade told AFP Fact Check.

“Some extremely small amounts of this protein could be found (in the first few days) in the blood, but it will be broken down by passing through the liver and eliminated through the kidneys through urine.”

“Extremely small amounts of spike protein can enter the circulation (picograms, which can only be detected by the most sensitive detection methods we have). But no, it can’t cause the problems caused by Covid, not even close,” he told AFP Fact Check.

“Even if we imagine some toxicity of the spike protein itself, the levels and spread throughout the body are WAY higher during infection (even mild infections) than with the vaccine. Even then, it would be far wiser to get vaccinated than to get infected.”

Spike proteins do not ‘circulate’ for weeks

To support his claims, Cole refers to a Harvard study of 13 nurses who received both doses of mRNA vaccines. The study found that 11 of the participants had “detectable levels of SARS-CoV-2 protein” after receiving their first dose.

However, one of the authors of the study, researcher David Walt, told AFP Fact Check that the results of the study have been misinterpreted.

The goal was to collect scientific data on the circulation of antigens, which are spike proteins specific to the SARS-CoV-2 that allow the production of antibodies.

In the small study, the concentration of SARS-CoV-2 proteins progressively decreased as antibody concentration increased. Partial spikes disappeared from the plasma of all vaccinated individuals after 14 days.

“Our conclusion was that the vaccine works as planned,” Walt said.

Christian Münz, a professor of viral immunobiology at the University of Zurich in Switzerland, previously told AFP Fact Check that “only a very high concentration of spike protein can cause damage to the body, but that is not the case after vaccination”.

Stojkovic agreed: “Neither the vaccine nor the protein synthesized based on the vaccine causes illnesses similar to Covid-19.” A syringe is filled with a first dose of the Pfizer Covid-19 vaccine, taken on August 16, 2021 (AFP/PATRICK T. FALLON)

To support his claims regarding the supposed dangers of the spike protein, Cole refers to a study from a team of scientists at the Salk Institute for Biological Studies, published in the journal Circulation Research.

However, according to Stojkovic, Cole misinterpreted the results of this research.

Stojkovic explained that in the study, researchers found that if a large amount of spike protein is injected into hamsters, it will cause some damage to the lungs and to the mitochondria in the pulmonary artery cells.

The quantity of spike protein created by mRNA vaccines is much too low to cause damage, Stojkovic told AFP Fact Check.

“When we talk about vaccines and spike protein synthesized based on the vaccine, the amount of spike protein in the muscle and neighbouring lymph nodes remains extremely small.”

W. Glen Pyle, a professor in the Department of Biomedical Sciences at the University of Guelph, wrote about misinformation circulating on the dangers of spike proteins in vaccines.

“Claims of a looming vaccine catastrophe brought about by vaccine-induced spike proteins fails to consider that the spike protein of vaccines is different than the natural form; that its engineered shape prevents activation; and that multiple elements confine spike protein expression to a highly localised collection of cells whose purpose is to activate the immunity vaccines are designed to produce,” he said in an article written for Covid19 Resources Canada.

No evidence of risk to blood-brain barrier

In the video, Cole also claims that spike proteins can “break through the blood-brain barrier and cause brain damage”. AFP Fact Check previously debunked this claim in Serbian here.

Daniel Dunia, director of research at the French National Centre for Scientific Research (CNRS), said at the time that the mRNA vaccine was injected locally into the muscle, and the effect of spike proteins would be limited to the initial cells that the vaccine targets to elicit an immune response. mRNA is unstable and will degrade quickly.

“Even when a person suffers from a serious Covid infection, there is no direct evidence that damage to the BBB (blood-brain barrier) is directly related to the virus,” he added.

Contacted again on August 13, 2021, Dunia confirmed to AFP Fact Check that there is currently no scientific evidence to claim that mRNA vaccines cause neurodegenerative diseases.

“Moreover, there are no reported neurological side effects associated with the mRNA vaccine, if you exclude the classic temperature that you have with many vaccines,” he said.

Rare cases of myocarditis after vaccination under investigation

Without providing any sources, Cole claims towards the end of the video that “spike protein (from the vaccine) attacks the heart’s tissues, causing myocarditis and pericarditis”.

While it is true that mRNA vaccines have been linked to reports of inflammation of the heart -- called myocarditis and pericarditis -- these cases remain rare, according to the Centers for Disease Control and Prevention (CDC) as well as the European Medicine Agency (EMA).

In a statement issued on July 9, 2021, the EMA said it is “recommending listing myocarditis and pericarditis as new side effects in the product information for these vaccines, together with a warning to raise awareness among healthcare professionals and people taking these vaccines”.

The CDC recommends vaccination against Covid-19, as the risks associated with the disease remain much higher than the risk of contracting myocarditis. Myocarditis can also occur with SARS-CoV-2 infection.

Of the 355,5 million vaccines administered in the United States as of August 18, 2021, the CDC has received “1,253 reports of myocarditis and pericarditis among people in their thirties and younger who received the Covid-19 vaccine”.

In a research letter published on August 4, 2021, scientists from the Providence Regional Medical Center in Everett, Washington, studied the cases of patients from 40 hospitals diagnosed with myocarditis and pericarditis after receiving the Covid-19 vaccine.

The study found that all patients recovered from symptoms and that no deaths were reported. The letter notes an increase in the reporting of myocarditis and pericarditis.

As of August 18, 2021, more than 4,5 billion vaccine doses have been administered globally.