A viral claim that a Pfizer executive supposedly "admitted to the European Parliament" in October 2022 that the company's Covid-19 vaccine has not been tested on preventing coronavirus transmission omits important details about clinical trials for the jab. This information is not new as the misleading posts allege; it has been publicly reported by the company, health agencies, and multiple news media since December 2020. Pfizer's clinical trials were designed to measure its vaccine's effectiveness in preventing severe Covid-19 -- not in preventing viral transmission, which scientists told AFP is difficult to measure.

The post translates in part as: "Pfizer executives have admitted that Pfizer vaccines have never been tested on its efficacy to prevent transmission of Covid-19."

The post shares a two-minute video that makes a similar claim --originally posted on Twitter on October 11, 2022 by Dutch MEP Robert Roos.

Roos's video -- which has racked up more than 13 million views -- shows a brief portion of a European Parliament special committee hearing on October 10, 2022.

In the clip, Roos asks Pfizer executive Janine Small: "Was the Pfizer Covid vaccine tested on stopping the transmission of the virus before it entered the market?"

Small responds in part: "No".

"Did we know if the vaccine made it possible to stop immunisation before its marketing? No", answers the head of Pfizer.

The use of the word "immunisation", mistakenly used instead of the term "transmission", was a slip of the tongue by Janine Small, the laboratory's communication service told AFP in an email on October 14, 2022: "I can confirm that Ms Small meant 'transmission'. Nevertheless, the substance of what she meant remains the same." 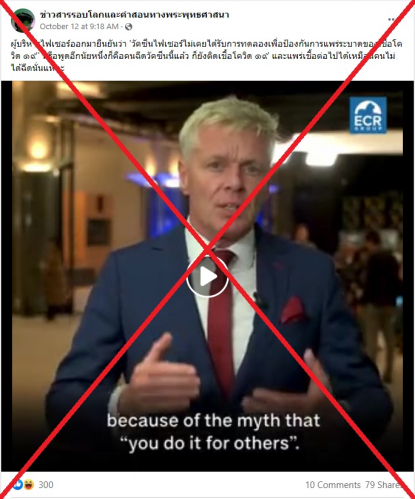 The posts prompted a flurry of angry responses accusing Pfizer of allegedly hiding the information from the public.

One commented: "My my, so this revelation is finally coming out into the open, but they all need holding to account and fines, prison etc they should be made to pay for what they have done."

But Pfizer's response during the committee hearing was not an "admission" as the posts allege; the information has been publicly reported since 2020.

The information that Pfizer's Covid-19 jabs were not tested for stopping transmission has been included in a report published here on December 10, 2020 by the US Food and Drug Administration (FDA).

The question of transmission is addressed on page 48 of the FDA document under a section titled: "Vaccine effectiveness against the transmission of SARS-CoV-2".

The document states: "Data are limited to assess the effect of the vaccine against transmission of SARS-CoV-2 from individuals who are infected despite vaccination."

Screenshot taken from the FDA's website, taken on October 17, 2022

"Additional evaluations including data from clinical trials and from vaccine use post-authorization will be needed to assess the effect of the vaccine in preventing virus shedding and transmission, in particular in individuals with asymptomatic infection," the document continues.

Nevertheless, the report also noted that "demonstrated high efficacy against symptomatic Covid-19 may translate to overall prevention of transmission in populations with high enough vaccine uptake."

The same information has been widely reported by multiple media organisations in December 2020 -- including AFP here.

Contacted by AFP, the Pfizer-BioNTech laboratory said in an email on October 14, 2022, that "the phase III clinical trial (the protocol for which was published in November 2020)" was not “designed to assess vaccine efficacy against SARS-CoV-2 transmission.”

The European Medicines Agency (EMA) explains on its site that certain "benefits might not be known when a Covid-19 vaccine is initially approved."

"The benefits only become clearer after the vaccine is in use," explains the agency, specifying that over time, health authorities are better able to know "whether the vaccine can reduce the spread of the virus in the community. Reducing transmission will depend on many factors, including how many people get vaccinated."

In a document dated February 19, 2021, the EMA wrote that from the conclusions of the clinical trials conducted on the Pfizer vaccine: "It is presently not known if the vaccine protects against asymptomatic infection, or its impact on viral transmission."

“The trials involve a few tens of thousands of people and at the time there was no such circulation of the virus with the original strain. The vaccine had prevented a lot of contamination compared to the placebo, so we would have had very few people infected despite the vaccination. Then, it would still have been necessary to follow them to find out if they could have infected other people who were not necessarily included in the trial, which is very complicated to objectify", epidemiologist Antoine Flahault said on October 13, 2022.

“The experts wanted solid criteria, and this is measured by looking at the impact of the vaccine on deaths and hospitalisations, and not on models of transmission”, he concluded.

The results of Pfizer's large-scale clinical trial -- carried out on several thousand volunteers -- were published in the New England Journal of Medicine the same month. The trial found the jab was effective in reducing severe Covid-19.

Multiple experts told AFP the goal of clinical trials has always been to measure the Pfizer jab's effectiveness against severe forms of Covid-19 -- not in stopping transmission.

They said transmission depends on many factors -- including circulating variants of the coronavirus at the time -- which are not necessarily reproducible within a clinical trial.

"If in addition this vaccine proved to be effective on transmission, it was even better, but that was not the goal of vaccine development at the level of clinical trials," epidemiologist Yves Buisson told AFP on October 13, 2022.

In the results of the phase III clinical trial (conducted on approximately 44,000 people) of the Pfizer-BioNTech vaccine, detailed in this document from the United States Medicines Agency (FDA) dated December 10, 2020, it is indicated on page 46 that among the “known benefits” of the product is the “reduction in the risk of Covid-19 confirmed at least 7 days after the second dose” as well as “after dose 1 and before dose 2”.

The document also notes that the vaccine allows "the reduction of the risk of severe Covid-19 confirmed after dose 1".

The effectiveness against severe forms -- already strongly suggested in the results of clinical trials -- was then verified during vaccination campaigns around the world, as several experts explained to AFP in the context of a previous verification investigation.

Several studies ( 1 , 2 , 3 ) looking at data analysing vaccination campaigns -- particularly in the UK and Israel -- have shown that Covid vaccines not only show efficacy against severe and symptomatic forms of disease but also that vaccines have reduced the risk of contamination on the original strain.

AFP debunked a similar claim after it circulated in French-language posts.