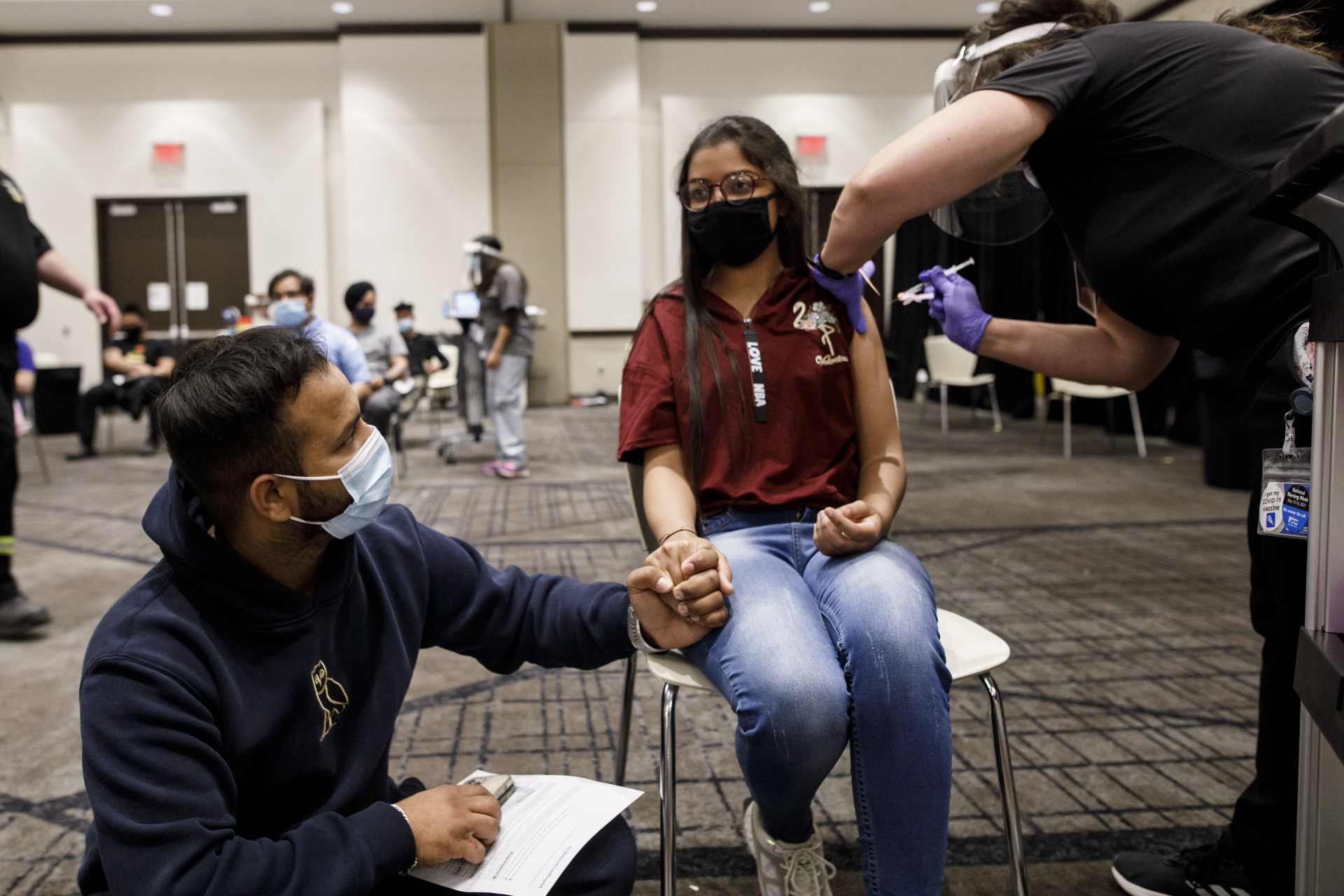 A video featuring Canadian doctors warning about the purported harm to children from Covid-19 mitigation measures and vaccines is circulating on social media. But the 22-minute video includes multiple false or misleading assertions about mask wearing and the shots, several of which have been previously debunked.

“Protecting Our Children From Harm” says the title of the May 19, 2021 video, the latest distributed by Liberty Coalition Canada. 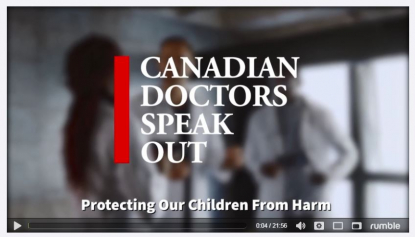 Screenshot of a video posted on Rumble by Liberty Coalition Canada, taken on May 28, 2021

The video is the second in a series called “Canadian Doctors Speak Out.” AFP Fact Check determined that the first video from the group, released in March 2021, included a series of inaccurate claims about the coronavirus pandemic.

The new video -- part of a torrent of inaccurate information about Covid-19 and vaccines spreading online -- has been widely circulated, racking up more than 23,000 views on Rumble.

It was shared on Instagram and Facebook, including by MP Derek Sloan, who was ejected from the Conservative party in January 2021, in part over the revelation that he took a donation from a white nationalist.

It was also amplified on Twitter by Ontario provincial parliament member Randy Hillier, an outspoken critic of restrictions put in place to prevent the spread of Covid-19, and whom AFP previously fact-checked here. 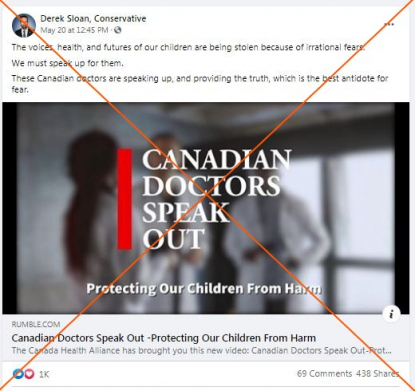 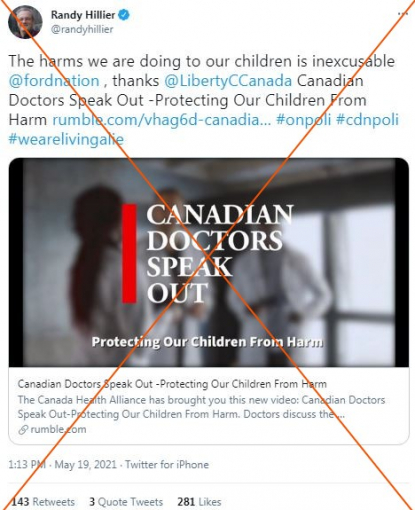 Below, AFP Fact Check examines inaccurate claims in the video.

Claim: “The harms of mask wearing are now quite clear, the risks far outweigh the benefits”

False claims that masks are harmful have been repeatedly proven wrong during the pandemic. They remain a polarizing topic, but Canadian authorities agree that mask-wearing is an essential measure to counter the spread of the coronavirus.

The claim that masks do not help slow the spread of the virus is presented by Jeffrey Matheson, a pain management specialist. 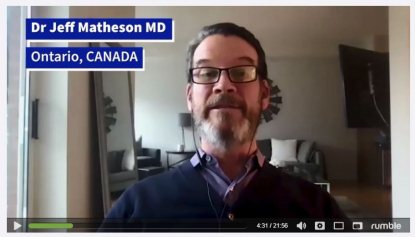 Screenshot showing Jeffrey Matheson, taken from rumble.com on May 24, 2021

Matheson had a “suspension of registration” imposed on him by the College of Physicians and Surgeons of Ontario on April 28, 2021. This is not the first time he has been sanctioned by the College. In 2017, a Discipline Committee found that Matheson “committed an act of professional misconduct.”

One piece of evidence shown in the video is a study titled “Effectiveness of Adding a Mask Recommendation to Other Public Health Measures to Prevent SARS-CoV-2 Infection in Danish Mask Wearers : A Randomized Controlled Trial.”

The findings of the study -- that a recommendation to wear a surgical mask when outside the home was not effective in preventing the spread of Covid-19 -- received significant attention in November 2020.

However, it was followed by an editorial in the same journal explaining that the study did “not disprove the effectiveness of widespread mask wearing” because it focused on people in Denmark, in a community where most people were not wearing masks.

More recent research from the US Centers for Disease Control and Prevention (CDC) found that “mandating masks was associated with a decrease in daily Covid-19 case and death growth rates within 20 days of implementation.”

The video also references a misleading article from May 2020 by Russel Blaylock that AFP fact-checked at the time.

AFP has also examined false claims about the impact of mask wearing on children here and here.

Claim: “All masks trap the carbon dioxide that we breathe out”

In this section of the video, Bill Code, an anesthesiologist from British Columbia, speaks about the purported dangers of masks trapping carbon dioxide.

But AFP has interviewed several experts who said that the non-medical masks recommended to be worn to help curb the spread of Covid-19 do not lead to hypoxia -- a lack of oxygen in the body -- and is unlikely to cause hypercapnia -- a build up of carbon dioxide in the blood.

Dr Vinita Dubey, associate medical officer for Toronto Public Health, previously told AFP that “in general, a cloth mask does not fit tightly to the face. Air can still go around the mask as well as through the pores in the material.”

The video also includes footage from The Highwire -- a program produced by anti-vaccination activist Del Bigtree -- showing an experiment to measure the CO2 captured by a mask. 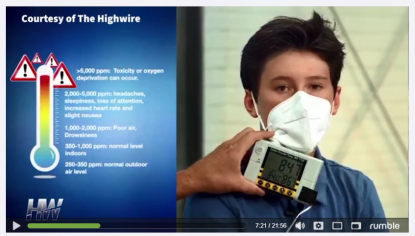 Screenshot showing footage from The Highwire with Del Bigtree, taken from rumble.com on May 24, 2021

AFP fact-checked that episode in July 2020. Hyo-Jick Choi, a researcher at the University of Alberta, who designed surgical masks and respirator filters, said the experiment was flawed.

“They are using the wrong device and they are trying to compare the wrong numbers,” he said.

Claim: “All of the Covid vaccines are completely new, experimental gene therapies”

Charles Hoffe, a British Columbia-based physician who sent a letter in early April 2021 to the BC chief medical officer claiming that the Moderna Covid-19 vaccine harmed some of his patients, is featured at the 15 minute mark in the video. In his remarks, he calls the vaccines “gene therapies” and claims that the shots are unsafe and ineffective. 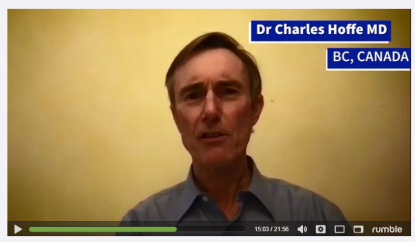 Screenshot of Charles Hoffe, taken on rumble.com on May 24, 2021

The Canadian federal government authorized four vaccines so far: two from Pfizer-BioNTech and Moderna that use messenger RNA (mRNA) technology, and two from AstraZeneca and Johnson & Johnson, which employ different technology.

Scientists have widely rejected the unsubstantiated claim that mRNA vaccines can modify human DNA, and AFP Fact Check has debunked other social media posts making that assertion here and here.

Hoffe cites the example of the viral vector-based AstraZeneca and Johnson & Johnson shots as proof that vaccines are unsafe, saying they were “suspended in many countries because of potentially fatal blood clots.”

Administration of these vaccines was halted in some countries following reports of rare blood clots, but it has since resumed.

Some Canadian provinces stopped giving first doses of the AstraZeneca shot and turned to other vaccines.

In late March, the National Advisory Committee on Immunization (NACI) recommended a suspension of the administration of the AstraZeneca vaccine to people under 55.

Health Canada released an update on the blood clots in mid April, saying that “the potential risk of these events is very rare, and the benefits of the vaccine in protecting against Covid-19 outweigh its potential risks.”

Both the CDC and the European Medicines Agency reached similar conclusions.

The NACI estimated that, based on evidence available as of mid May, the risks of a Vaccine-Induced Immune Thrombotic Thrombocytopenia event were as low as one in 83,000 doses administered, but could be as high as one in 55,000.

Claim: “Since December 2020, over 2,600 people have died just in the US after getting their shots”

The CDC says on its website that more than 285 million doses of Covid-19 vaccines have been administered in the US between mid-December and late May, and that the US Vaccine Adverse Event Reporting System (VAERS) received 4,863 reports of death among people who received the shots.

The health agency says that “a review of available clinical information, including death certificates, autopsy, and medical records has not established a causal link to Covid-19 vaccines.”

However, it notes that “recent reports indicate a plausible causal relationship between the J&J/Janssen Covid-19 vaccine and a rare and serious adverse event -- blood clots with low platelets -- which has caused deaths.”

As of May 27, the CDC identified 32 confirmed reports of people who received the Johnson & Johnson vaccine and later developed thrombosis with thrombocytopenia syndrome (TTS), out of more than 10 million doses administered in the United States.

In the video, Hoffe cites US data on deaths following vaccination to claim that Covid-19 vaccines are unsafe. The data he references comes from VAERS.

This database, jointly run by the CDC and the Food and Drug Administration, records voluntary reports of adverse events following vaccinations. An official description of the system makes clear that the reports are not proof of a vaccine causing harm.

VAERS “contains information on unverified reports of adverse events (illnesses, health problems and/or symptoms) following immunization with US-licensed vaccines” and accepts reports “from anyone,” it says.

AFP has previously fact-checked multiple misinterpretations of this data.

Claim: “None of the Covid shots has been shown to prevent transmission of Covid”

The scientific debate has not yet been settled on how effectively vaccines prevent transmission of Covid-19, but they have been shown to significantly reduce the risk of contracting a severe form of the disease.

The CDC says on its website that while research is still underway, “early data show that vaccines help keep people with no symptoms from spreading Covid-19.”

Data published on the New England Journal of Medicine's website shows that the number of people who tested positive for Covid-19 at a Texas medical center was extremely low after most of the staff was fully vaccinated.

In Canada, few people are getting sick with Covid-19 after getting their shots. Deaths and hospitalizations among older adults, who were the first to be vaccinated, have also been dropping, while intensive care unit admissions of younger people, who are less vaccinated overall, have climbed.

Claim: “The risk of your child dying of Covid or getting seriously sick from it is almost zero and children are not the main spreaders of this disease”

Children have a lower chance of severe outcomes from a Covid-19 infection, but they still represent one fifth of Covid-19 cases in Canada and more than 14 percent of cases in the United States.

Experts also suggest that undetected asymptomatic spread in young people could have helped fuel the spread of the virus.

“Infections among asymptomatic cases are likely to have gone undetected, but they may have fueled the spread of infection across the generations,” according to an article by British researchers published on the British Medical Journal’s website.

A study about household transmission in Wuhan, China published in The Lancet found that “within households, children and adolescents were less susceptible to SARS-CoV-2 infection but were more infectious than older individuals.”

The study also noted that the incubation period -- when a person infected with Covid-19 is not yet displaying symptoms but can still spread the disease -- could also play a part.

Dr Supriya Sharma, Health Canada’s chief medical adviser, said: “While younger people are less likely to experience serious cases of Covid-19, having access to a safe and effective vaccine will help control the disease's spread to their family and friends, some of whom may be at higher risk of complications.”

“It will also support the return to a more normal life for our children who have had such a hard time over the past year,” she added.