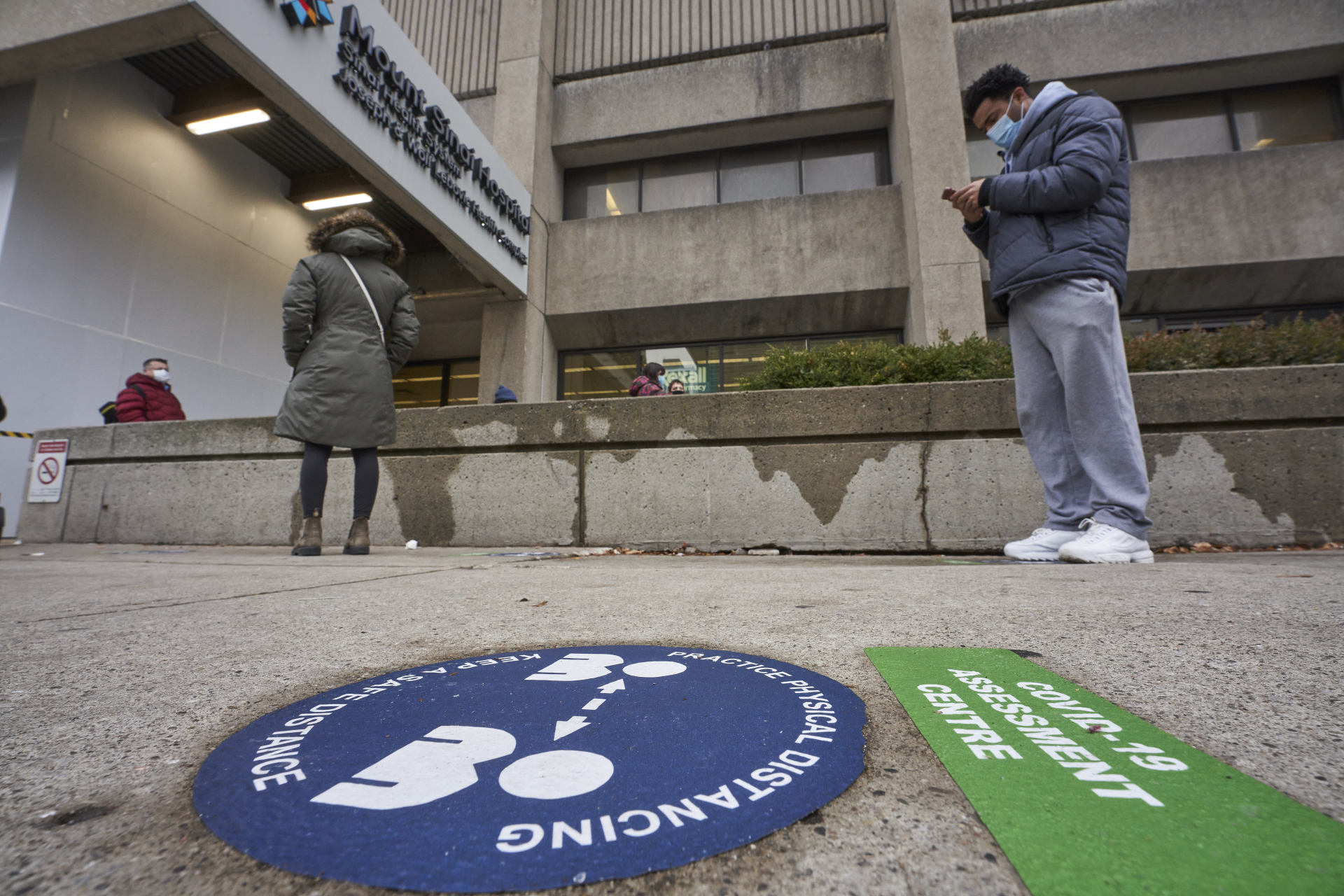 A sign points people where to stand as they wait at a Covid-19 assessment center at Mount Sinai Hospital in Toronto, Ontario in November 2020 (AFP / Geoff Robins)

A video titled “Canadian Doctors Speak Out,” which claims to offer the top reasons not to fear Covid-19, has been shared thousands of times on social media. But public health experts said it includes misleading claims about variants of the disease and immunity, and recommends treatments that have not been proven effective against the virus.

The nearly 12-minute video, which has circulated since March 8, 2021, features commentary from doctors in British Columbia and Ontario. They are licensed medical professionals but not coronavirus specialists, and claim to offer Canadians tips on how to protect their health “that do not include getting a shot with a vaccine.”

It was posted online by Liberty Coalition Canada in partnership with the Canadian Health Alliance, which says it believes that policies aimed at addressing the pandemic “are destroying Canadian society and the health of Canadians.” The press release on the video has been shared more than 4,900 times on Facebook, according to the social media monitoring tool CrowdTangle. 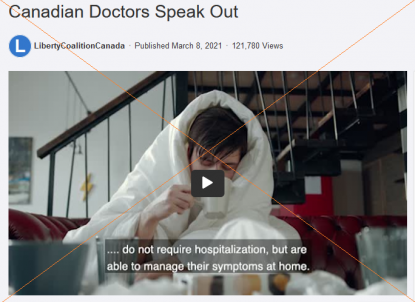 Screenshot taken from rumble.com on March 11, 2021

It was further promoted on Twitter by Randy Hillier, an independent Member of the Provincial Parliament in Ontario. He formed the “End the Lockdowns Caucus” and regularly posts on social media against mask mandates and other public health measures taken to curb the spread of the coronavirus. 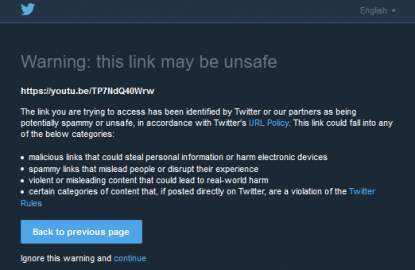 While many physicians are working to spread accurate information about the pandemic, others -- in Canada and also in the United States -- have used their credibility as doctors to support false or misleading claims.

AFP Fact Check examines misleading claims made in the video, below.

Variants and evolution of the virus

Stephen Malthouse, a family physician from Denman Island, British Columbia, says in the video that variants of the coronavirus are only being discussed in the media to scare Canadians. He claims that “one slight variant was artificially created after a lot of hard work in a mouse study. The so-called variants had never been found in humans.” 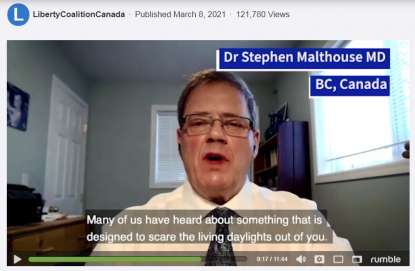 This was described as “nonsense” in an email by Srinivas Murthy, clinical associate professor in the Department of Pediatrics at the University of British Columbia.

A British variant of the coronavirus is of concern because it is more infectious, while South African and Brazilian variants appear to have a level of vaccine resistance.

Murthy said the existence of a variant that was created for a scientific paper, as mentioned by Malthouse, “does not mean they’re also not found circulating.”

Raymond Tellier, microbiologist at the McGill University Health Center, agreed. He said in a phone interview that his laboratory in Quebec has tested for and found coronavirus variants in patient samples and that “there is no doubt that the variants have arisen naturally during the infection of a population with the virus.”

Malthouse also claims that because “a virus cannot live alone but depends upon human cells to live, it makes evolutionary sense that it will become less dangerous, not more so, over time. If it becomes more easily spread, but less likely to make you really sick, then that is a good natural progression toward herd immunity.”

David Fisman, Professor at the Dalla Lana School of Public Health at the University of Toronto, said in an email that this assertion “is disinformation that contains a grain of truth.” While it is true that viruses mutate, the severity of the illness caused can go in either direction, he said.

He added it is hard to get lasting herd immunity from natural infection, “because the viruses can change in ways that evade immune responses.” This is most commonly seen with seasonal flu.

Tellier acknowledged that Malthouse was not wrong to say there are examples of viruses that have become less dangerous, but he pointed to the British variant which is associated with higher mortality.

The British strain was found to be 64 percent deadlier in a study published in March, 2021.

Tellier also said that the process for a virus to weaken can take several years. “We will pay for it at the cost of millions of deaths.”

Health Canada said in an email to AFP that it is carefully monitoring variants of concern that could cause the virus to require different treatments or impact the effectiveness of current vaccines.

It said its modeling data shows that “longer-range forecasts predict strong resurgence with variants of concern unless stringent public health measures (are) in place and sustained.”

“Do you know that many of us are already immune to SARS-CoV-2 due to cross-reactive T cells?” Caroline Turek, an Ontario-based doctor who specializes in hormone replacement therapy, asks in the video. She was using the abbreviation for the official name of the virus that causes Covid-19.

T cells are a type of white blood cell that are an essential part of the immune system.

She goes on to claim: “Immunologists and virologists worldwide have studied and found that 30 to 50 percent of people already have pre-existing immunity to SARS-Cov-2 from pre-existing circulating T cells.”

This, she said, “is due to prior exposure from other coronaviruses, such as the common cold… Many, many of us are more protected than we realize from Covid, from our T cells,” and we are “closer to herd immunity than we realize.” 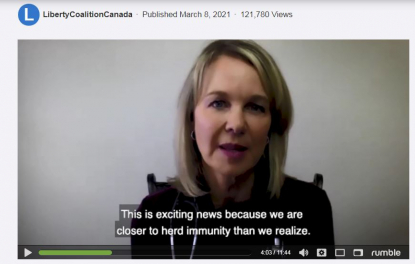 Stephen Hoption Cann, clinical professor in the School of Population and Public Health at the University of British Columbia, cautioned in an email against misinterpreting cell studies to judge whether individuals with Covid-19 infections would be protected.

Stephen Hoption Cann said it is “wishful thinking” to claim that “many of us are already immune” and added that “the only way to get close to herd immunity is to vaccinate most of the population against this disease.”

McGill’s Tellier also said that cross-reactions of certain T cell populations are not the same thing as conferring protection from an infection.

“We know empirically that it doesn’t protect the population because many people have had severe infection with Covid who almost certainly have been infected previously in their lives with coronaviruses, and it didn’t protect them,” he said, noting that having cross reactions in some T cells doesn’t stop us from getting the flu.

“Research on specific T cells, including vaccine-elicited T cells, is beginning. The main reason this has not been studied as much as antibodies is that it is extremely more difficult to test for cellular immunity than for antibodies,” he explained.

In the video, “remedies” such as hydroxychloroquine and vitamin D are claimed to be effective against Covid-19. While individual experiences with patients are presented as proof, to date none of these have been scientifically shown to be effective.

In the video, Bill Code, an anesthesiologist from British Columbia, said that he was treated for Covid-19 with vitamin D, hydroxychloroquine and other supplements, and recovered “within seven to 10 days.” 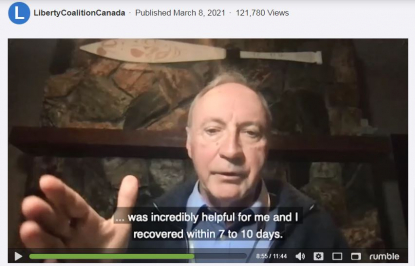 Hydroxychloroquine was touted by former president Donald Trump and his Brazilian counterpart Jair Bolsonaro, but study after study has shown that it is ineffective against Covid-19 and experts say it could be harmful.

On March 2, the World Health Organization said it “strongly advises against use of hydroxychloroquine to prevent Covid-19.”

“High certainty evidence showed that hydroxychloroquine had no meaningful effect on death and admission to hospital,” while other evidence showed “it probably increases the risk of adverse effects,” the organization said in a statement.

The Canadian government also recommends against the use of hydroxychloroquine as a treatment for patients with Covid-19 “due to negligible evidence of efficacy and significant potential for harm.”

Tellier explained that “hydroxychloroquine has been studied in several clinical trials: it doesn’t work and it has potentially dangerous toxic effects,” including cardiac arrhythmias.

Tellier compared the current situation to the early days of Hepatitis C treatment research, when well-known drugs with limited results were used, but eventually, safer and more effective medications were found.

He said that the development of Covid-specific treatments will likely take “a few years of research.”

The scientific debate is not yet settled on the efficacy of vitamin D against Covid-19 and research into its use is ongoing.

Deficiencies in vitamin D were associated with an increased chance of mortality among Covid-19 patients in a November 2020 Scientific Reports study.

In the video, Dorle Kneifel, a family practice physician in Vancouver, tells how she beat Covid-19 by taking 60,000 international units of vitamin D per day until her “symptoms were gone.” 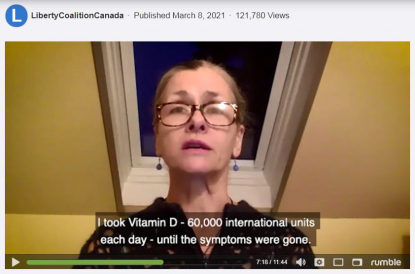 McGill’s Tellier also cautioned against taking “too high a dose, which can lead to toxicity.”

This warning is supported by a study, published in Clinical Medicine, that found that “more than the usual daily supplement should only be taken under medical supervision.”

This is not the first time that misleading statements on the pandemic have circulated from a Canadian individual with a medical degree.

The College of Physicians and Surgeons of BC said in an email that medical professionals “need to be aware that when they identify themselves as a physician, the public tends to place great weight on their opinion even if that physician has no expertise in a medical specialty, such as population health or infectious diseases.”

It added: “The confidence entrusted by the public places even greater responsibility on physicians when making pronouncements about the COVID-19 pandemic.”