An open letter to Alberta’s premier by former heart surgeon Dennis L Modry has been shared on social media as the Canadian province enacted stricter measures aimed at curbing the Covid-19 pandemic. But medical experts say several claims in the letter are false or unproven, and Modry is not currently licensed to practice, according to the College of Physicians and Surgeons of Alberta.

The letter was originally published on December 11, 2020 by the Western Standard, a Canadian website run by Derek Fildebrant who formerly led Alberta’s Freedom Conservative Party. 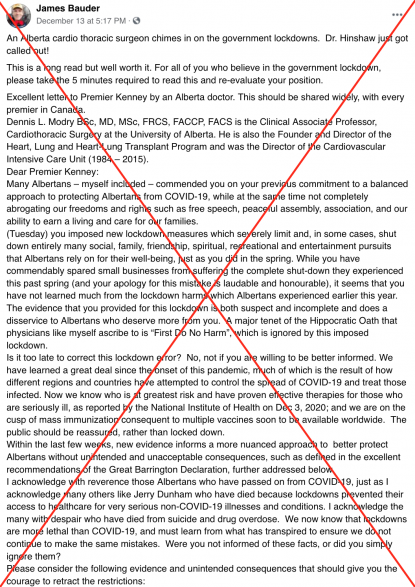 In mid-December, the province put several new public health measures in place, including a ban on indoor and outdoor social gatherings and mandating mask-wearing indoors. As of December 22, Alberta had the highest number of active coronavirus cases in Canada.

Modry was registered as a physician with the College of Physicians and Surgeons of Alberta (CPSA), but is now listed as “inactive” on the CPSA website. A prominent heart surgeon in the 1980s, his medical career ended amid a multi-million dollar legal battle with Alberta Health Services following his loss of operating privileges in 2013.

“The article suggested Dr Modry is a currently practising physician; however, it’s important to note he is not licensed to practise medicine in Alberta,” CPSA wrote in a statement following the publication of the open letter.

“Dr Modry’s specialization was in surgery, he does not have expertise in public health,” the CPSA added.

Dr Barry Pakes, an assistant professor at the University of Toronto’s Dalla Lana School of Public Health, said in an email to AFP that “throughout the pandemic, input from medical specialists in various fields, various health care and other professionals, and the public, all form an important part of decision making."

“However, there is little that is more frustrating and devaluing of the complex and challenging medical specialty of public health and preventive medicine, than to have people who are specialists or experts in other areas provide authoritative advice in the field of public health.”

In his letter, Modry says that the province is nowhere near its intensive care unit (ICU) capacity, which is misleading.

“We have a base of 176 general adult ICU beds – that’s where a Covid-19 patient would be cared for. As of yesterday, we had 151 Covid-19 patients in ICU. This does not account for the patients who do not have Covid-19. We are planning to expand capacity to 425 ICU beds, province-wide,” an Alberta Health Services spokesman said in an email.

Big city hospitals, such as those in Calgary, are scrambling to accommodate a surging influx of patients.

But even if the numbers of Covid-19 patients in ICUs were relatively low, “you still have all the other people who are sick with other things that need ICU beds. At baseline, we are over capacity for inpatient care in all of Canada, so to add an extra 10-15 percent ICU and 20-30 percent in other acute care is an absolute disaster,” the University of Toronto’s Pakes said.

“Currently (December 2020) Covid-19 patients are requiring the equivalent of 2 large community hospitals and 10 community ICUs on top of the usual care for patients with other medical and surgical problems,” the Edmonton Zone Medical Staff Association Pandemic Response Committee wrote in an emailed document.

It added that “Alberta has a lower ICU bed capacity than most Canadian provinces at 7.9 ICU beds/100,000 population following decades of hospital downsizing.”

“It is possible to provide extra beds, physiological monitors, ventilators and other life support equipment. However, it is not possible to provide skilled and experienced ICU doctors, critical care trained nurses and respiratory therapists for this number of beds,” the document said.

“It takes 6 years after medical school to educate an ICU specialist and 6 months of training to train a critical care nurse. Caring for a critically ill patient with Covid-19 requires a highly trained team working at the bedside around the clock.”

Modry also claims that “the PCR test for Covid-19 has a false positive rate of up to 50 percent according to the CDC.” This is false.

Clicking on the link provided leads to a CTV article about antibody tests, which are not PCR tests. Antibodies tests, also called serologic tests, can tell via a blood sample if a person has had Covid-19 in the past, while PCR tests measure if a person is Covid-19 positive at a specific moment in time.

The PCR tests via throat or nose-swab have a very low false positive rate (showing that you are Covid-19 positive even if you aren’t), according to an article on the Harvard Health Publishing blog comparing the different kinds of tests available.

These rare false positive results are mainly due to contamination of the sample or other lab-related issues, according to the article.

A UK study estimated that the false positive rate of PCR tests can fluctuate between 0.8 and four percent.

Modry also promotes measures outlined in the Great Barrington Declaration, which advises isolating people at risk from the general population, while allowing younger populations to gain immunity through infection -- hoping that herd immunity can somehow be achieved.

The arguments the Declaration puts forth have been discredited by medical experts, in part because herd immunity cannot realistically be achieved as long as the duration of immunity after an infection remains unknown.

“Never in the history of public health has herd immunity been used as a strategy for responding to an outbreak, let alone a pandemic. It is scientifically and ethically problematic,” Tedros said.

Sweden, which adopted a radically different approach to the rest of Europe, with no lockdown or restrictive measures while hoping for eventual herd immunity has not fared well. Swedish King, Carl XVI Gustaf, recently said that the country had “failed” at protecting people against Covid-19.

In contrast, “the most recent sets of restrictions are showing early signs of ‘bending of the curve’ in all five zones” in Alberta, according to the Edmonton Zone Medical Staff Association Pandemic Response Committee.

AFP Fact Check previously debunked a rumor about testing no-shows in Alberta’s Red Deer being counted as positive to inflate Covid-19 case numbers, false claims made by a doctor to the Edmonton City Council, and misleading claims about mandatory vaccination in the province.