Skip to main content
The Alberta Legislature building in Edmonton, Canada is reflected in a pool on June 23, 2015 (AFP / Geoff Robins)

Posts shared more than 10,000 times in Canada have claimed that recent changes to Alberta's health statutes will bring in forced medical isolation and vaccination. This is misleading; giving power to medical officers to prevent the spread of communicable diseases is not new, according to a legal expert, and Alberta’s premier, health minister and chief medical officer do not support mandatory vaccination. 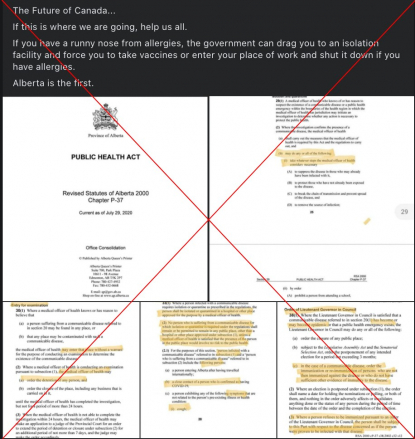 All the versions of the posts point to Alberta’s Health Statutes Amendments Act, also known as Bill 30, to claim it brought in mandatory medical isolation and vaccinations when it came into force in July 2020.

New powers in response to Covid-19

“Alberta is the first” says the one post, while another asks, “Why didn’t they do this with ebola or swine flu?”

Lorian Hardcastle, an associate professor at the University of Calgary’s Faculty of Law, told AFP by email, “These are not new powers, nor are they unique to Alberta.”

This is consistent with the 1984 version of the Public Health Act and the current one.

Screenshots, taken on October 1, 2020 of the 1984 version of the Public Health Act (left) and the current one (right)

“If you have a runny nose from allergies, the government can drag you to an isolation facility and force you to take vaccines or enter your place of work and shut it down if you have allergies” says this version of the post.

Steve Buick, Press Secretary to Alberta’s Health Minister Tyler Shandro similarly confirmed in an email, “The post about runny noses from allergies is also incorrect. Our public health guidance on self-isolation for people with respiratory symptoms refers to new symptoms not related to an existing health condition.”

Hardcastle added that “all government laws and actions are subject to the Charter of Rights and Freedoms. Arbitrarily detaining people for medical treatment or detaining them when other less intrusive alternatives were available (i.e. isolating at home) would all be unconstitutional.”

Jason Kenney, Alberta’s Premier from the United Conservative Party, agreed. He said in this Facebook live town hall that “since 1910, the Public Health Act and previous legislation have had the ability to require mandatory inoculation. As far we know, it has never been used and the Government has no intention of making that mandatory.”

Both Hinshaw and the province’s health minister have said they would support removing that power from the statute.

“I don’t see an example where that would be used. I think if we have a piece of legislation that we’re unlikely to use, I’m not sure it provides much benefit. So I would be comfortable with that particular piece of the legislation being removed,” Hinshaw said.

Shandro’s press secretary told AFP that the minister “is on record as supporting the current proposal to remove the provision in the Public Health Act giving the government the power to impose mandatory vaccination.”

AFP Fact Check has debunked more than 630 examples of false or misleading information about the novel coronavirus. You can find the complete list of our fact checks on the topic in English here.