Skip to main content
A photo taken on July 16, 2016 shows a copy of “Treatise on Tolerance” by Voltaire that was left at a memorial for victims of the deadly Bastille Day attack in Nice (AFP / Giuseppe Cacace)

Facebook posts attribute a quote about censorship to Voltaire. But the director of a scholarly foundation devoted to the 18th Century French philosopher said Voltaire did not make the statement, and that it seems to have originated with a neo-Nazi more than 200 years later.

“If you want to know who controls you, look at who you are not allowed to criticize,” says a May 17, 2021 Facebook post shared more than 81,000 times, which credits the quote to Voltaire. 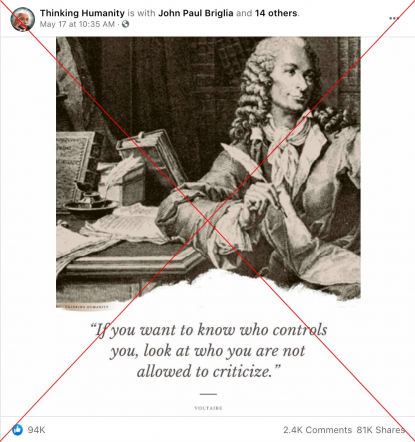 The claim also appeared on Facebook here, here and here.

But the quote did not come from the philosopher, according to the director of the Voltaire Foundation for Enlightenment Studies, a research department focused on the author whose works helped create the political and social systems of today.

“Another dictum that has recently gained wide currency on the web is this: ‘To learn who rules over you, simply find out who you are not allowed to criticize,’” wrote Nicholas Cronk, a French literature professor and director of the foundation at England’s University of Oxford.

“Now regularly attributed to Voltaire, this saying seems to originate with something written in 1993 by Kevin Alfred Strom, an American neo-Nazi Holocaust denier, and not a man who obviously exudes Voltairean wit and irony,” Cronk wrote in a blog post, listing it among “one-liners he never actually said.”

The Guardian and the BBC reported in 2015 that an Australian politician tweeted the quote and wrongly attributed it to Voltaire.

Buzzfeed traced the original wording to a 1993 essay called “All America Must Know the Terror That is Upon Us,” in which Strom wrote: “To determine the true rulers of any society, all you must do is ask yourself this question: Who is it that I am not permitted to criticize?”

The Southern Poverty Law Center, which monitors extremists in the United States, identifies Strom as a “neo-Nazi” and says he also pled guilty to possession of child pornography in January 2008.