Skip to main content
A house surrounded by debris, still not repaired from the damages caused by hurricane Michael in October 2018, is seen in Mexico beach, Florida on May 23, 2019. (AFP / Leila Macor)

A video has been viewed tens of thousands of times in multiple Facebook posts that claim it shows a cyclone hitting Bangladesh in May 2021. The claim is false: the clip shows a scene of Hurricane Michael battering the US coast in October 2018.

Thousands of people were left homeless on May 27 after Cyclone Yaas hit Covid-ravaged India and neighbouring Bangladesh. AFP reported on the storm here.

The same video was also shared here and here alongside a similar claim.

A reverse image search of keyframes extracted from the video clip found, combined with keyword searches, found this video posted on YouTube on October 12, 2018.

It is credited to Live Storms Media, a US-based video licensing agency.

The caption reads: “Full video from the full wrath that hurricane Michael unleashed on Panama City Beach, Florida as homes get ripped to shreds and tossed into the air”.

Below is a screenshot comparison of the video in the misleading post (L) and the video on the Live Storms Media channel (R): 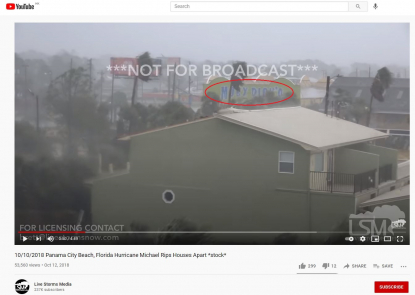 This corresponds with this retail business of the same name in Panama Beach.

The same video was published here in a CNN report, credited to Live Storms Media. It was published on October 10, 2018, with the headline: “Michael tears off roofs in Panama City Beach”.

Hurricane Michael slammed into the Florida coast on October 10, 2018, AFP reported here. It was the most powerful storm to hit the southern US state in more than a century.