Skip to main content
Sheep graze beside the prehistoric monument at Stonehenge in southern England, on April 26, 2020, closed during the national lockdown due to the novel coronavirus COVID-19 pandemic. (AFP / Adrian Dennis)

Multiple photographs have circulated on social media alongside a claim they show Stonehenge, a British prehistoric monument, being built in the 1950s. The claim is false: the posts shared photos of excavation and restoration projects at Stonehenge in the 1950s. Stonehenge was built as early as the prehistoric period, according to archaeological evidence.

“Bastards who steal others’ monuments to make a fake monument,” the post’s Korean-language caption reads in part. 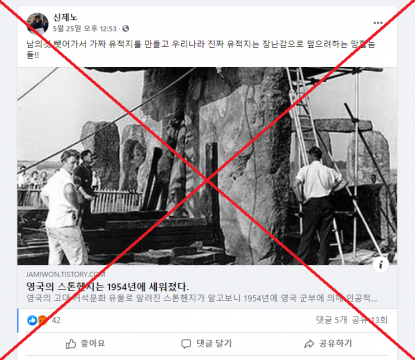 It is titled: “Britain’s Stonehenge was erected in 1954.”

The blog post reads in part: “Photographs have been revealed and show the likelihood that the ancient British monument of Stonehenge was in fact artificially erected by the British military in 1954...It is a significant shock that Stonehenge is not an ancient monument but fabricated.”

Stonehenge is the most architecturally sophisticated prehistoric stone circle in the world, located in Wiltshire, England, according to UNESCO’s World Heritage Centre.

Multiple photographs shared alongside the claim in the misleading blog purport to show construction activities at Stonehenge.

Similar claims have been shared among Facebook users in South Korea and other countries here and here; as well as on Tistory here.

English Heritage, the foundation that manages Stonehenge, dates the monument’s creation to at least the late Neolithic period -- around 2500 BCE.

Further academic research indicates Stonehenge was built in the Stone Age. The research was published here on the Historic England website; here on the website for the US National Center for Biotechnology Information.

AFP found 11 out of the 74 photographs used in the misleading blog post show conservation and excavation projects at Stonehenge in the 1950s.

An English Heritage blog post published here details the conservation activity at Stonehenge in the years between 1950 and 1964. It includes several of the photos used in the Tistory post.

All those photos were copyrighted by the Historic England Archive, a collection of historical records run by a UK public body.

One of the photos shows an excavation at the site in 1954.

Below is a screenshot comparison of the photo in the misleading blog post (L) and the English Heritage photo (R):

Screenshot comparison of one of the photos on the Tistory blog (L) and on the blog of English Heritage (R). Captured May 27, 2021.

The original image's caption reads: “Richard Atkinson (in the trench, second from right) and team excavating the bluestone circle in 1954.”

Atkinson was one of the archaeologists tasked by the Society of Antiquaries to undertake excavations of Stonehenge in order to write up a “full and definitive” volume of the monument’s archeology, the English Heritage blog says.

Another photo from English Heritage shows a lintel stone being fitted during a 1958 restoration project.

Below is a screenshot comparison of the photo in the misleading blog post (L) and the English Heritage photo (R): 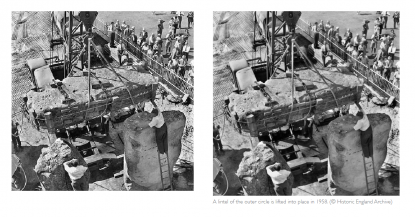 Screenshot comparison of one of the photos on the Tistory blog (L) and on the blog of English Heritage (R). Captured May 27, 2021.

Some stones were moved during the 1958 restoration in order to restore parts of the monument, according to the English Heritage blog post.

Many of the other photos shared in the misleading posts can be found through the Historic England Archive's database. 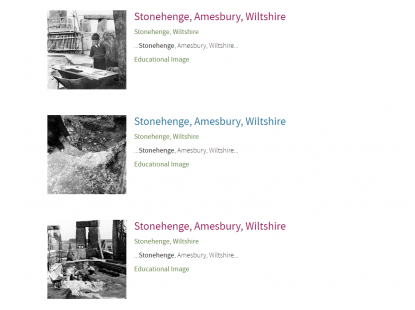 Screenshot of the Stonehenge excavation and restoration photos in the Historic England Archive. Captured May 27, 2021.

There are also a wide variety of visual depictions of Stonehenge that date pre-1954, including paintings and drawings from the British Museum, and photographs as seen here on the website of UK broadcaster BBC. 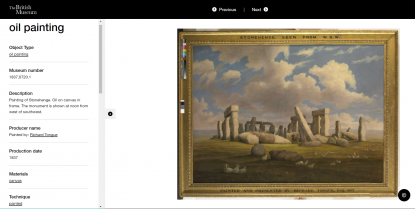 Screenshot of an 1837 oil painting of Stonehenge, stored at the British Museum. Captured May 27, 2021.