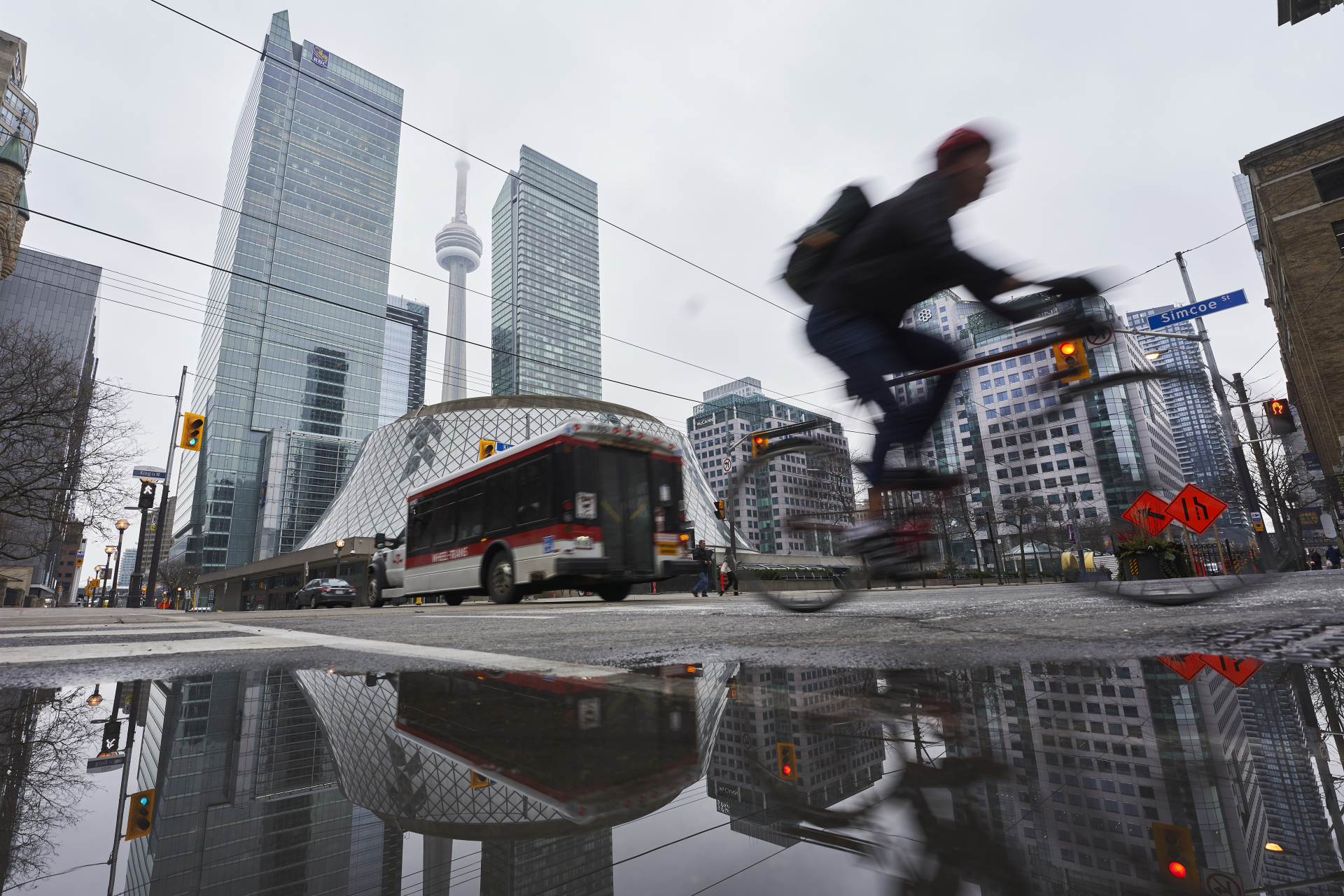 A man rides his bicycle through Toronto, Ontario in November 2020 (AFP / Geoff Robins)

A tweet from a member of the Ontario provincial parliament that claims to offer major pandemic-related findings, including Covid-19 vaccines causing harm and lockdowns being useless, has been shared thousands of times on social media. But the tweet misrepresents recent official remarks, and neither the Salk Institute nor the University of British Columbia released reports as the politician claimed.

“This week in covid,” begins a May 12, 2021 tweet from Ontario MPP Randy Hillier, an outspoken critic of restrictions put in place to mitigate the spread of Covid-19. 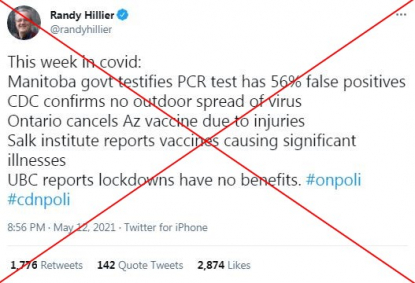 Canada has recorded more than 25,000 Covid-19 deaths. With Ontario facing rising cases, including Canada’s largest number of patients with the B.1.1.7 variant first detected in the United Kingdom, a strict stay at home order went into effect on April 8, 2021.

This tweet is part of a pattern of inaccurate claims about the pandemic in Canada from those who oppose the closure of schools and businesses.

Below, AFP Fact Check examines each of Hillier’s claims.

RT-PCR or reverse transcription polymerase chain reaction tests have been a regular target of misinformation throughout the pandemic.

The tests are the most commonly used means to identify the presence of SARS-Cov-2, which causes Covid-19.

The claim about Manitoba came after testimony given during a court case in which seven churches are challenging the province’s public health orders and the validity of PCR testing.

On May 10, Dr Jared Bullard, an associate professor at the University of Manitoba, testified about PCR tests.

Bullard, who is also associate medical director of the Cadham Provincial Laboratory,  did not respond to AFP request for comment, but local media reported that he said PCR tests are the most dependable tests they have and that they are performing quite well in identifying the virus.

The 56 percent figure may refer to a recap of Bullard’s testimony published by the Justice Centre for Constitutional Freedoms, which is representing the churches. It was headlined: “Manitoba Chief Microbiologist and Laboratory Specialist: 56% of positive ‘cases’ are not infectious.”

“A study from Dr Bullard and his colleagues found that only 44 percent of positive PCR test results would actually grow in the lab,” the recap said. 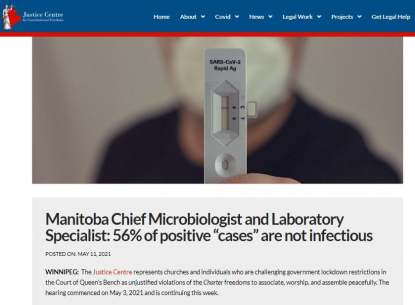 Screenshot taken from the Justice Center for Constitutional Freedoms website on May 19, 2021

Bullard had conducted a study to learn more about the infectivity of Covid-19 patients.

The study tested infectivity in cell cultures, but a spokesperson for Manitoba told AFP: “It is simply untrue to equate cell culture positivity with a Covid-19 diagnosis.”

The spokesperson said it determined that “using cell culture testing methods means public health would have less information that was less helpful, and would take longer. PCR testing is optimal for detecting SARS-CoV-2 and assisting in the diagnosis of Covid.”

Another Canadian province showed that false PCR test positives are extremely rare. As of August 15, 2020, Public Health Ontario had recorded a possible false positive on “30 occasions among over 850,000 specimens tested for Covid-19,” or a rate of less than 0.01 percent.

A May 7, 2021 scientific brief from the US Centers for Disease Control and Prevention (CDC) on the transmission of Covid-19 does not say that the virus cannot spread outdoors.

However, at a White House press briefing on April 27, 2021, CDC director Dr Rochelle Walensky told reporters: “There’s increasing data that suggests that most of transmission is happening indoors rather than outdoors; less than 10 percent of documented transmission, in many studies, have occurred outdoors.”

In the US health agency’s latest guidance for “choosing safer activities,” it continues to caution unvaccinated individuals against attending large gatherings outside, even when masked.

AstraZeneca’s viral vector-based vaccine was given authorization in Canada on February 26, 2021 for adults age 18 and older.

On May 11, Dr David Williams, Ontario’s chief medical officer of health, announced a pause in use of the AstraZeneca shot for first doses.

“This decision was made out of an abundance of caution, due to an observed increase in the rare blood clotting condition known as vaccine-induced immune thrombotic thrombocytopenia, linked to the AstraZeneca vaccine,” he said.

The Canadian government had recorded 15 such clotting cases up to May 7, with two cases that resulted in death.

Ontario had already administered more than 650,000 AstraZeneca doses, including to Prime Minister Justin Trudeau and his wife Sophie.

The Ontario Ministry of Health did not respond to AFP’s request for comment, but CBC reported that Ontarians who already received a first dose of the AstraZeneca vaccine will be able to opt to get a second shot.

The shot also remains in use in other Canadian provinces, and Health Canada states on its website that “the benefits of vaccines authorized in Canada continue to outweigh the risks.”

A recent study by the scientific research center in California, which examined how the spike proteins in SARS-CoV-2 damage cells in a person’s vascular system, has been the subject of a wave of misinformation.

The study concluded the opposite of this claim, finding that vaccination-generated antibodies against the spike protein are an effective way to protect people from the virus.

“Although there is ongoing research to understand the Covid-19 pandemic, we are currently not aware of any papers that have been published by UBC researchers showing the harms/benefits of lockdowns,” Collins Maina, assistant media relations specialist for the University of British Columbia (UBC), told AFP.

“The study proposed economic suggestions to manage air pollution and did not look into health outcomes of lockdowns,” Maina said.

In contrast to the claim, a British study published in Nature that examined the steps taken by 11 European countries from February to May 2020 estimated that 3.1 million deaths were avoided, and said “lockdowns in particular -- have had a large effect on reducing transmission.”