Social media posts and online articles claim the World Health Organization admitted that PCR tests are resulting in widespread false positives for the virus that causes Covid-19, and asked laboratories to change the way they are conducted. But a January 2021 WHO notice only reminded labs to ensure testing equipment is properly calibrated, following reports of a small number of both false positive and negative results.

“Literally, an hour after Biden took the oath of Office the World Health Organization released new guidance to labs to reduce the cycle count for COVID PCR tests. Why? Because the current PCR cycle has grossly inflated the case numbers” claims a January 21, 2021 Facebook post. 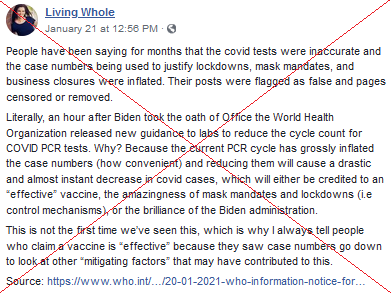 The tweet, an archived version of which can be viewed here, claimed that “the World Health Organization has now released guidance to laboratories around the world to reduce the cycle count in PCR tests to get a more accurate representation of COVID cases. The current cycle was much too high and resulting in any particle being declared a positive case.” 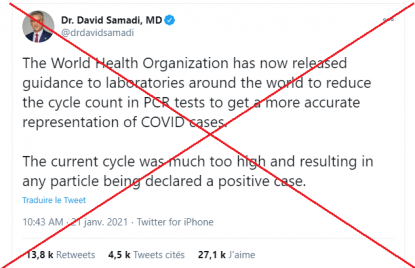 Similar posts, which claim that many tests produce false positives because the laboratories perform too many "amplification cycles" of the SARS-CoV-2 RNA, have been shared thousands of times since January 20, 2021.

Versions of the misleading claims can also be found in French and Spanish.

Polymerase Chain Reaction, or PCR, tests are the most commonly used means to identify the presence of SARS-Cov-2, which causes Covid-19. Case numbers resulting from these tests are used to track the progress of the disease in many countries, and to determine when restrictions aimed at curbing its spread need to be tightened or loosened.

In order to be able to detect the SARS-CoV-2 genome in a biological sample, the machine used in testing will “amplify” the genetic material a certain number of times, at different temperatures: these are known as the amplification cycles, and are a key part of PCR testing.

The threshold of positivity is different from one machine to another, which makes it impossible to settle on a universal number of cycles.

On January 20, the WHO posted an update to a recommendation it made a month earlier  reminding laboratories to use PCR testing machines according to manufacturers' operating instructions in order to avoid errors.

In the notice, the WHO asks “users to follow the instructions for use (IFU) when interpreting results for specimens tested using PCR methodology.” 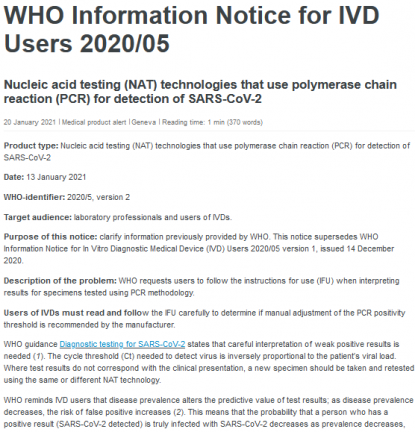 Contrary to the claims made in the tweet by Samadi, the WHO does not ask to reduce the number of amplification cycles, but advises labs to “determine if manual adjustment of the PCR positivity threshold is recommended by the manufacturer.”

10 problems reported to WHO

Asked by AFP about the purpose of this note, the WHO replied in an email on January 22, 2021 that a limited number of issues with PCR test results had been reported to the organization, prompting the reminder.

“Since the beginning of 2020, WHO has received 10 reports of problems related to PCR tests for the detection of SARS-CoV-2... The reports were for misdiagnosis, both false positive and false negative results,” the WHO said.

Contrary to claims in some of the misleading posts, 10 reports of misdiagnosed cases are a very small number when compared to the volume of tests performed.

It is therefore incorrect to say that the WHO is alarmed by a significant proportion of “false positives,” or that it said the PCR tests massively overestimated the positive cases.

“After thorough investigation, WHO confirmed that the tests were not always being used appropriately and in accordance with the instructions provided by the manufacturer,” the WHO said.

“In particular, users in laboratories encountered problems with these tests when they did not apply the recommended positivity threshold -- this can result in either false negative results (if the threshold applied is lower) or false positives (if threshold is higher),” it continued.

“On 14 December 2020, WHO issued an information notice to explain what had happened and recommending the correct use of instructions. The notice with the same recommendations was reissued on 20 January 2020 with some language modifications to ensure greater clarity.”

A previous version of the notice, dated December 7, 2020 and put online on December 14, 2020, can be found here. It said: “WHO has received user feedback on an elevated risk for false SARS-CoV-2 results when testing specimens using RT-PCR reagents on open systems.”

This version may explain why similar, older social media posts highlighting “false positives” can be found in English and in French.

This notice is also not the first time that the WHO acknowledged the possibility of “false positives” when tests are not performed properly.

In a September 11, 2020 document titled “Diagnostic testing for SARS-CoV-2,” the organization explained that “there is also a risk of false positive or false negative SARS-CoV-2 results, if testing is not performed with adequate assays or not done under adequate conditions.”