Skip to main content
US President Joe Biden addresses a joint session of Congress as US Vice President Kamala Harris (L) and US Speaker of the House Nancy Pelosi (R) listen at the US Capitol in Washington, DC, on April 28, 2021 (AFP / POOL / Jim Watson)

Biden speech audience lower than Trump’s, but not 11.6 million

“No crowds at his rallies. No crowd at his inauguration. Empty chamber for his speech. Virtually no viewers at home. 81,000,000 votes?” he wrote, hinting at debunked claims that the 2020 election was rigged against Trump. 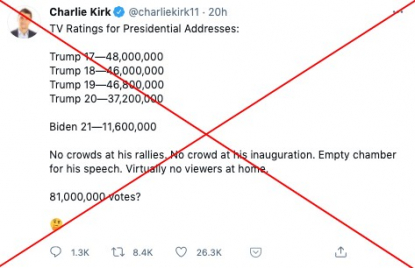 However, it is inaccurate to say there were only 11.6 million viewers of Biden’s remarks, which was not a State of the Union Address, as were three of the Trump speeches listed.

The number of viewers of Biden’s presidential address were widely reported, and came from the same source: Nielsen.

The company’s data is routinely cited by media organizations after key events. It later released its final estimate for viewers of Biden’s speech, which was 26.9 million -- considerably higher than the initial 11.6 million number. 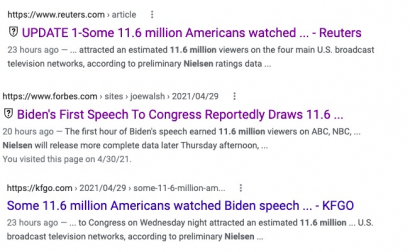 A screenshot of Google result thumbnails taken on April 30, 2021 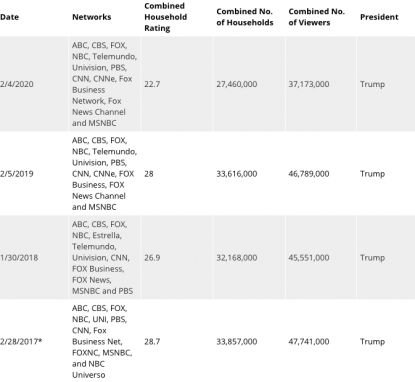 Biden’s ratings were lower than Trump’s for his equivalent 2017 speech. CNN attributed the difference to the gradual erosion of live TV audiences in the United States.

Nielsen’s 26.9 million figure accounts for live coverage including out-of-home viewing and connected TVs, but not internet streaming, radio, and other formats.

Biden received 81,268,924 votes in the 2020 US election, and claims that the vote was plagued by fraud have been systematically debunked by AFP Fact Check.