Georgia vote-counting machines were not rigged to give Biden lead

Social media posts claim an examination of Dominion vote-counting equipment revealed it automatically gave president-elect Joe Biden a 26 percent lead in Georgia’s Ware County. This is false; officials said there is no truth to the allegations, and while a tabulation error in the hand count did misallocate 0.26 percent of the county's votes, it was caught and corrected.

“Ware County, Ga has broken the Dominion algorithm: Using sequestered Dominion Equipment, Ware County ran a equal number of Trump votes and Biden votes through the Tabulator and the Tabulator reported a 26% lead for Biden,” said a tweet from a Georgia accountant shared 30,000 times. 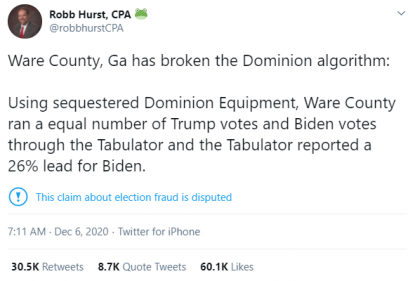 The tweet, which was spread thousands more times as a screenshot on Facebook and Instagram, further claimed in a thread that Ware County ran a simulation on election hardware provided by Dominion Voting Systems in which 37 votes for Donald Trump were automatically switched to his Democratic rival.

Georgia Republican Representative Jody Hice also contributed to the false claim by tweeting on December 4 about a supposed study of Ware County voting machines that showed vote-switching took place during the 2020 general election. His tweet was shared 17,000 times.

However, the claim is false and Dominion equipment was never seized or examined in Ware County.

“The claim is the farthest thing from the truth,” Ware County elections supervisor Carlos Nelson told AFP by phone.

“The only study on these machines is when we do our accuracy test before the election,” Nelson said, adding that the machines, which the State of Georgia provided for counties to count and record absentee and mail-in ballots, are “accounted for and secure.”

Georgia’s Secretary of State Office said in a December 7 statement: “There is no truth to allegations... that voting machines in Ware County had been seized or that they somehow revealed tampering.”

Office spokesman Walter Jones called it a falsehood peddled “by conspiracy advocates trying to convince the gullible of why the presidential election didn’t turn out as they’d hoped.”

Though no Dominion voting machines were seized or studied, the 26 percent figure appears to be a distorted account of a real mistake.

Upon being asked for a source for online users after his tweet became viral, Robb Hurst first mentioned a local Republican Party official who “said it was from a friend,” before publishing a link to an interview of Garland Favorito, a Georgia Republican who founded elections advocacy group Voter GA.

The interview rehashed points made in a December 3 press release, which said an audit of Ware County’s voting system “shorted Donald Trump 37 votes and added those 37 votes to totals for Joe Biden.”

Without evidence, Favorito attributed the 37 votes to intentional vote flipping by Dominion machines. Favorito said by phone that his press release was accurate, “and anything you see on Twitter or social media is probably not right.”

But Favorito’s press release is not accurate, because although 37 votes were added to Biden’s tally, Dominion machines were not involved.

“The discrepancy in numbers wasn’t caused by the Dominion machines or in the audit on those machines. It was a human error in the tabulation of the absentee ballots, mail-in ballot,” Nelson said.

Nelson said that the error was made when a Ware County elections employee scanned the same batch of 100 ballots twice after the scanning machine rejected it due to a rip or a tear.

The error was caught during the audit and fixed. The later recount, requested by President Trump’s team, matched the new numbers, showing the error had been fixed.

“We are 100% confident that there was no vote flipping,” Nelson said, adding that Trump had won nearly 70 percent of the vote in the county, which is consistent with past elections in which Republicans won “65 to 70 percent” of the vote there.

The 37 votes represent 0.26 percent of Ware County’s 14,000 votes cast, as the secretary of state’s statement mentioned. This may be the origin of Hurst’s 26 percent figure.

Trump and his team have made unfounded allegations that Dominion Voting Systems machines were involved in fraud since he lost the election, feeding online conspiracy theories about the company, several of which AFP Fact Check has debunked. One falsely claimed that Dominion servers were seized in Germany to investigate fraud.