A photo of funeral pyres has been shared repeatedly in Facebook and Twitter posts alongside captions about a surge in Covid-19 deaths in India. The photo has been shared in a misleading context: it has circulated online since 2012 and does not relate to the coronavirus pandemic.

It was posted alongside an image of Indian prime minister Narendra Modi.

The photo’s Hindi-language caption translates to English as: “People are dying, funerals happening across but [Modi’s] political parties are busy fighting elections. They are hiding covid reports in Bengal but until when? After elections, it will become clear how the government posed covid threats for the public. People are dying but the government is silent.” 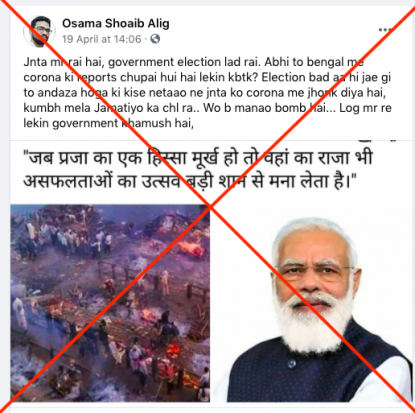 The photo was also shared alongside a similar claim here and here on Facebook; and here on Twitter.

But the photo has been shared in a misleading context.

Reverse image searches on TinEye found the image has circulated online in posts that predate the Covid-19 pandemic.

A similar photo was published in this blog post in 2012.

The post is titled: “Banaras (Varanasi) The Most Ancient City of the World and still Alive (Manikarnika Ghat of Varanasi)”.

Funeral pyres burn all day in Varanasi as the city is believed to be sacred, according to this report by National Geographic.

Photographer Krishna Sharma, who the blog credits for the photo, said social media users were "misusing" his photo in 2021.

“People are misusing it and I feel bad about that.”

An identical photo was published in this news report by the Gujarati Times on April 6, 2018.

The first confirmed Covid-19 case in India was detected on January 30, 2020, according to this research article.