Facebook posts claim that a rally in the British capital of London against coronavirus rules on April 24, 2021 attracted 750,000 protesters. This figure, however, has been exaggerated; British media reported the rally attracted around 10,000 protesters  -- an estimate which is borne out by photos and videos of the event. An AFP journalist who covered the rally on the ground said there were “certainly not hundreds of thousands” of protesters.

The claim was shared on Facebook on April 26, 2021 by New Zealand blues musician Billy Te Kahika, who has more than 22,000 followers. 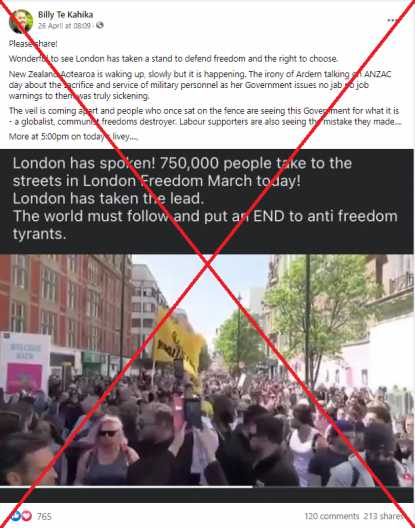 The post includes a photo of a crowd. The text reads: “750,000 people take to the streets in London Freedom March today!”

The post refers to a protest in London on April 24 which saw demonstrators rally in several spots across the city against coronavirus restrictions. Police said they arrested five people, and eight officers were injured at the rally.

In the post, Te Kahika praises protesters for defending “freedom and the right to choose”. He then criticises New Zealand Prime Minister Jacinda Ardern's "no jab no job warnings" -- an apparent reference to her urging border workers to get vaccinated.

Other posts -- shared here, here, here and here -- similarly claim that hundreds of thousands of people attended the London protest.

No credible media outlet reported that hundreds of thousands of protesters joined the April 24 rally.

Of the British media outlets, Sky News gave a slightly higher estimate of “at least 10,000” demonstrators.

AFP photojournalist Ben Stansall covered the event on the ground. He said “there were tens of thousands, certainly not hundreds of thousands” of protesters.

AFP produced this video of the rally, which corresponds with Stansall's estimate of the crowd size. It can be seen below:

Contacted by AFP, London’s Metropolitan Police would not provide a crowd estimate for the protest.

The largest rally in British history was the London anti-war protest on February 15, 2003 opposed to the pending invasion of Iraq, the BBC reported. At least 750,000 people attended the rally, although organisers estimated there could have been as many as two million protesters.