This photo of Philippine President Rodrigo Duterte has been digitally altered

A photo purporting to show Philippine President Rodrigo Duterte in a wheelchair has been shared repeatedly on Facebook and Twitter. The image circulated online in April 2021 as Duterte's absence from public events prompted rumours he was ill. The photo, however, has been digitally altered: the original image, which has circulated online since October 2020, shows Duterte on a motorcycle.

The altered photo was posted on April 10, 2021 in this public Facebook group which has more than 1,000 members.

It purports to show Duterte sitting in a wheelchair, flanked by several men.

The post's Tagalog-language caption translates to English as “SO THAT’S WHY. HMMM. BONG(A) GO IS RUNNING THE GOVERNMENT. FROM SIDEKICK TO ‘PESTE-DENT’”.

“Bong(a) Go” is a play on the nickname of Senator Go and the Tagalog word “gago” which means foolish.

“Peste-dent” is an insult that combines the words "president" and "pest". 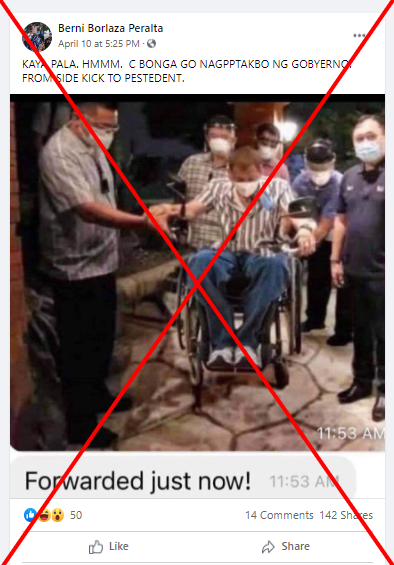 This image circulated online after Duterte’s absence from public events in early April 2021 prompted rumours he was ill.

The president was finally seen in a televised address on the Philippines’s Covid-19 situation on April 12, 2021 where he gave no explanation for his absence.

The photo was also posted on Facebook here, here and here; and on Twitter here and here alongside a similar claim.

The photo, however, has been digitally altered.

The post's Tagalog-language caption reads: “Father Digong is a veteran motorcycle rider. He misses [riding] very much. He’ll do it next time, he says!! Let’s ride with him! Just please take care! The nation needs and loves you!!! -- (elder brother) BONG GO”.

One photo in the set matches the altered image that circulated online.

A reporter for Philippine news site Rappler, Pia Ranada, also shared the same photo on her Twitter account on October 1, 2020.

A screenshot comparison of the altered image (L) shows the areas that were manipulated in the original photo (R): 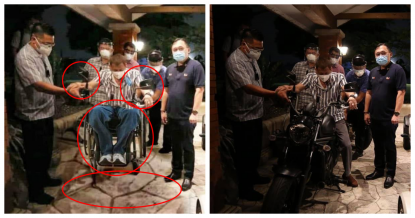