Skip to main content
A nurse loads a syringe with the Moderna Covid-19 vaccine for patients in Bloomfield, Connecticut, on February 12, 2021 (AFP / Joseph Prezioso)

Articles shared on social media claim several dietary supplements can serve to “neutralize” effects of widely-used Covid-19 shots. This is false; doctors dismiss the claim, and the US Centers for Disease Control and Prevention (CDC) says the inoculations are safe and effective.

The headline of a February 8, 2021 article reads: “How to Neutralize Potential Damage from mRNA Vaccines” and says “it is important to discuss practical ways to ‘detox’ and ‘neutralize’ damage that is being done by these untested mRNA vaccines.” 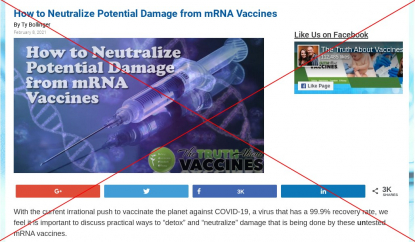 The author names iodine, zinc, quercetin, carbon 60, and pyrroloquinoline quinone (pqq) as the “TOP FIVE recommended substances to mitigate damage from mRNA vaccines (in no particular order)” and provides links to purchase them.

Hosted on a website called “The Truth About Vaccines,” the story has been shared more than 1,800 times on Facebook and to more than 15,000 followers on Twitter, according to social media tracking tool CrowdTangle.

In what appears to be an online sales pitch aimed at vaccine skeptics, it attributes the information to “a physician who wishes to remain anonymous.”

The article was also posted on another website, dated February 10. It reads: “THOSE WHO REGRET GETTING VACCINATED CAN STILL NEUTRALIZE THE INEVITABLE MRNA DAMAGE.”

It also appears on a website called “Prepare for Change.”

The description of that site says it “was formed by a group of people acting on behalf of the Resistance Movement, a long established organization of intelligence operatives opposing the cabal, whose spokesman goes by the code name of Cobra.”

The reference to “the cabal” appears to allude to QAnon, a conspiracy movement that claims former president Donald Trump is waging a secret war against a global cult of Satan-worshipping liberal pedophiles, and which has been a damaging source of health misinformation during the Covid-19 pandemic.

Scientists have widely rejected the unsubstantiated claim made in the articles that mRNA vaccines can modify human DNA. AFP debunked that claim here and here.

Pfizer-BioNTech and Moderna are the mRNA vaccines approved for emergency use to protect against Covid-19 in the US. The disease caused by the novel coronavirus has killed more than 3,000,000 people worldwide, but more than one billion doses of vaccine have been administered globally, many of them mRNA shots.

The CDC explains that mRNA vaccines are a new form of immunization designed to “teach our cells how to make a protein—or even just a piece of a protein—that triggers an immune response inside our bodies” and notes that “they cannot give someone Covid-19” or “affect or interact with our DNA in any way.”

Also false, says official guidance, is the claim that mRNA vaccines are untested and dangerous.

mRNA vaccines are "safe and effective,” the CDC website says, pointing users to more information about testing and clinical trials.

Instead of confronting the immune system with part of a virus in a weakened or deactivated form to build antibodies, an mRNA vaccine differs from a regular shot in that it introduces a “blueprint” of the spike protein -- part of the virus that the body can then recognize and fight when confronted by it later.

Experts said these substances are unlikely either to alleviate side effects or to curtail the effectiveness of the shot.

Dr Amesh Adalja, an infectious disease physician and senior scholar at Johns Hopkins Center for Health Security, told AFP in a phone interview: “I don't think any of those things would do anything.”

He added: “If you're worried about side effects from an mRNA Covid-19 vaccine, take some Tylenol.”

Neither would these supplements render mRNA vaccines ineffective, Adalja said. “None of those things would probably have any effect on the immunogenicity of the vaccine.”

Referring to the article content on the whole, he said: “It’s a piece of trash.”

“Boy, this is just full of errors,” he said by phone.

“Articles like this reject the science we have while not imposing on itself a better system of science… normally what would happen if you reject a piece of information, you are then required to muster the data to show why it should be rejected and develop new data showing why your method or your way is better.”

Poland called the article “a remarkable double failure” that “plays on vague fears and conspiracies.”

To propose medical treatment, one should be a licensed medical professional and provide an evidence base for the suggested action, Poland said. Without a clinical trial -- which mRNA vaccines have successfully undergone -- you cannot say definitively if any of the supplements would work in that way, but Poland said he sees no evidence as to why they would.

Dr Matthew Laurens, director of the fellowship in pediatric infectious diseases at the University of Maryland School of Medicine, told AFP: “None of these substances in any form would minimize side effects from a COVID-19 vaccine. Side effects from the vaccine are essentially related to the immune response that is stimulated in response to vaccination.”

He noted that taking these supplements is not expected to reduce the effectiveness of an mRNA shot, but that in theory it was possible “some of these chemicals could… diminish the immune response to vaccination.”