Articles shared tens of thousands of times on social media claim Wisconsin, a state crucial to president-elect Joe Biden’s victory, may have broken the law by allowing poll clerks to fill in missing witness addresses on absentee ballots. This is false; the state’s elections commission says the practice applied to witness certifications -- not the ballots themselves -- and poll clerks have been allowed to add the addresses since 2016 under a policy Republicans endorsed. The article, which was posted on Facebook by Daily Wire co-founder Ben Shapiro, came as President Donald Trump refuses to concede and contends without evidence that the election was stolen.

In its claim, The Daily Wire refers to Wisconsin Statute 6.87 6(d), which states that if the witness certificate accompanying an absentee ballot is missing the witness’s address, then “the ballot may not be counted.”

The article continues that, in October 2020, the state Elections Commission issued a directive “that seemed to allow” clerks to “‘fix’ ballots.”

Similar claims appeared on the Just the News website and were made by conservative podcaster Dan O’Donnell, whose article was retweeted by Trump’s son Eric. 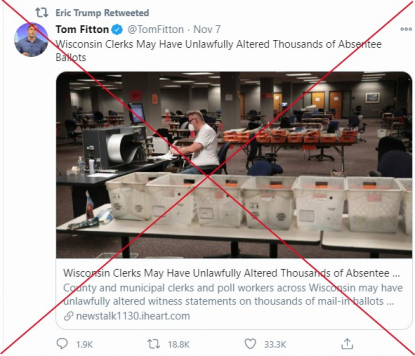 Screenshot of a retweet from Eric Trump, taken November 10, 2020

“There were no corrections made to ‘ballots,’” Reid Magney, public information officer for the Wisconsin Elections Commission, said in a statement emailed to AFP.

“These were witness addresses added, in accordance with the Commission directive, to the certificate,” which is on the ballot envelope and must include signatures of the voter and witness, as well as the witness’s address, he said. 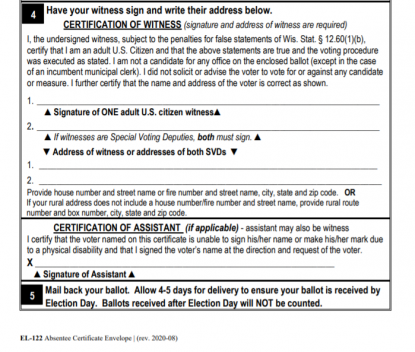 Screenshot of an example of a Wisconsin absentee ballot certificate, taken November 9, 2020

The addresses were added as part of a “publicly observable process” and under Commission guidance in effect since October 2016.

The statement added that the motion to approve the guidance was made by Republican members of the Commission four years ago. It passed unanimously and has been in effect for 11 statewide elections, including the 2016 presidential and presidential recount.

“No one has objected to it until now,” the Commission statement said, adding that the October directive, cited by The Daily Wire, was simply a restatement of the earlier guidance.

An absentee ballot cannot be counted without a witness, and the law “does not specify who affixes the address,” the Commission said.

According to the guidance, a clerk can use “reliable information (personal knowledge, voter registration information, through a phone call with the voter or witness)” to resolve missing witness address information.

Details on how the state ensures the accuracy of its votes can be seen here.

US media on November 4 projected Biden as the winner of the 10 electoral college votes in Wisconsin, where Trump was victorious in 2016. He has demanded a recount in the state.

AFP Fact check has debunked other false and misleading claims about the vote tally in Wisconsin, as well as other inaccurate claims about 2020 election fraud.