Image shows Joe Biden kneeling to speak to a boy in Detroit, not George Floyd's daughter

An image showing US president-elect Joe Biden on bended knee in front of a child has resurfaced in numerous social media posts in Africa claiming the incoming American leader was apologising to the “daughter of George Floyd,” a black man whose death in police custody sparked widespread demonstrations. However, the claim is false; the photo, taken during Biden’s campaign, actually shows him chatting to a boy who is not related to Floyd.

The claim was published in numerous social media posts shared alongside the viral image, including this tweet by Nigerian former lawmaker, Dino Melaye, whose posts have been previously debunked by AFP Fact Check (here and here).

The viral photo shows Biden in a blue suit wearing a face mask and bending on one knee before a little black boy in a grey tracksuit. 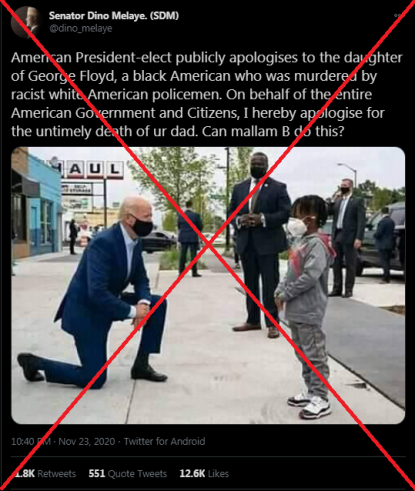 Melaye’s tweet, which was also reposted on his Facebook page, has been liked more than 12,000 times since it was published on November 23, 2020.

It was captioned: “American President-elect publicly apologises to the daughter of George Floyd, a black American who was murdered by racist white American policemen. On behalf of the entire American Government and Citizens, I hereby apologise for the untimely death of ur dad. Can mallam B do this (sic)?”

Melaye, who is a staunch critic of Nigerian President Muhammadu Buhari, indirectly questions whether Nigeria’s leader would do the same as  Biden.

The same claim was also shared in France a few days after Biden was declared the winner of the November 3 presidential election, along with his running mate Kamala Harris who became the first black female vice president of the United States.

It has since been shared widely in Nigeria and other African countries, including Uganda, Kenya and South Sudan. Many of the accounts have a history of promoting political content.

Since the death of 46-year-old African-American George Floyd, who was seen on camera pleading for his life as a white police officer kneeled on his neck for more than five minutes in the city of Minneapolis in May 2020, the United States has been faced with reignited protests under the banner of Black Lives Matter, a movement launched in 2013 with the aim ending police brutality and racism. 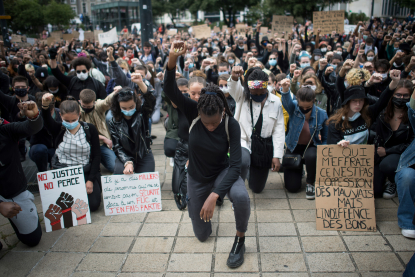 The anti-racism demonstrations that spread to countries around the world saw many protesters bending on one knee, a gesture popularised in 2016 by American footballer Colin Kaepernick to denounce police violence against black people.

Photo taken at a clothing store in Detroit

The claims are false; the photo did not show Floyd’s daughter, but a young boy whose father’s clothing store Biden had visited.

AFP Fact Check conducted a reverse image search on Google and traced the original version of the image to the website of international photo agency Getty Images.

The caption on the photo says it was taken by photographer Chip Somodevilla on September 9, 2020, in Michigan, and actually shows Joe Biden kneeling down to chat with C.J. Brown, the son of Clement Brown, who owns an apparel store in Detroit called “Three Thirteen”.

Biden, who was campaigning in Michigan, had gone to the store to shop for his grandchildren. Another Getty Images photo shows Biden giving Clement Brown a fist bump.

AFP photographer Jim Watson also documented the event and one of his images shows Clement Brown in the frame, wearing jeans and a grey T-shirt. 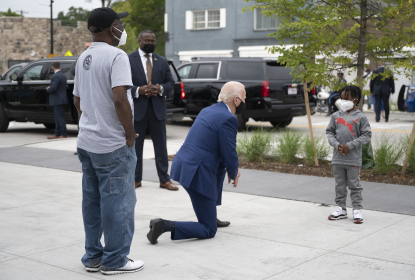 US president-elect Joe Biden speaks to C.J. Brown (right) as he shops for his grandkids at the Three Thirteen store in Detroit, Michigan, on September 9, 2020 (Photo by Jim WATSON / AFP)

In a similar AFP photo taken on the same day, Biden is seen kneeling beside a clothing rack, holding clothing items while the little boy, wearing the same grey tracksuit and tricolor sneakers seen in the viral shot, appears to take cover behind an unidentified woman. 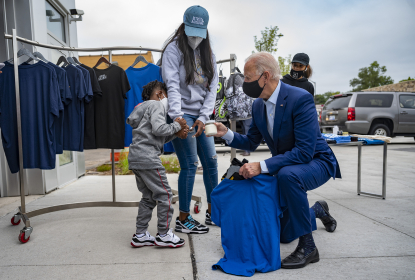 US president-elect Joe Biden talks with C.J. Brown (left) as he shops at the Three Thirteen store in Detroit, Michigan, on September 9, 2020 (Photo by Jim WATSON / AFP)

The US president-elect himself also shared a photo of his visit to the store on his official Instagram page, with a caption explaining the importance of a fair and just system for all children and their families.