Social media posts shared thousands of times accused Wisconsin of election fraud, shortly before projections showed Joe Biden winning the key battleground state. But the claim is false; the posts use old data that do not match official figures from the Wisconsin Elections Commission. 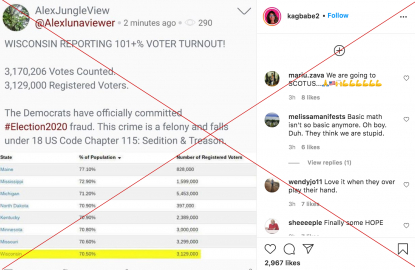 The statistics are wrong. Wisconsin had 3,684,726 active registered voters as of November 1, 2020, according to Wisconsin Elections Commission statistics.

According to keyword searches ran by AFP Fact Check, the false number seems to originate from a website specializing in population statistics called World Population Review. The layout and order of the table are identical to the one used in the social media post screenshots. Some posts even directly link to the page.

The title of the table misleadingly reads “Number Of Registered Voters by State 2020,” when in fact its sources tab provides a link to United States Census Bureau data related to 2018 voting registration. Data that can be downloaded from the World Population Review page additionally mention that they were collected in November 2018.

A screenshot taken on November 4, 2020 from World Population Review website, shows a table with old voter registration numbers by state

The same voter registration statistics can be found on Ballotpedia, which cites the US Census Bureau’s data for a total of 3,129,000 registered Wisconsin voters “in the Election of November 2018,” as shown in the table below.

Later on November 4, 2020 the website updated its page and its data with the 2020 numbers of registered voters for each state, linking to official sources including the Wisconsin Elections Commission webpage.

A screenshot taken on November 4, 2020 of a Ballotpedia table shows the entry for Wisconsin voter registration statistics from 2018

The numbers mentioned in the social media posts are therefore outdated and not relevant when looking at the 2020 election vote counts.

Reid Magney, public information officer of the Wisconsin Elections Commission, warned that online data could be several days old. “Wisconsin has Election Day registration (...) typically hundreds of thousands of people register to vote on Election Day across the state,” he told AFP by phone.

During a press conference on Wednesday, Wisconsin Elections Commission Director Meagan Wolfe said that the state was now focusing on “triple checking” the results, as all of the unofficial results are in, waiting to be certified, except for a small polling station of around 300 voters.

Wisconsin -- won in the 2016 general election by President Trump -- constitutes a critical win for the former vice president, who is inching closer to overall victory as Trump demands a recount in Wisconsin and alleges mass fraud.

Speaking to journalists on Wednesday, Wolfe hailed the state’s handling of voting as “an incredible success” and “a result of years of preparation and meticulously carefully following the law”.

She said every step of the election process is publicly observable. “We have a really solid system here.”

The head of the Organization for Security and Cooperation in Europe (OSCE) mission which monitored the US vote said there was no evidence of fraud in the “well managed” election.

Biden has so far won 21 states including his home state Delaware and big prizes California and New York, as well as the US capital.