Donald Trump’s lawyer Rudy Giuliani falsely claimed in a post-Election Day tweet that the president had an unassailable lead in Pennsylvania, a state which could decide who wins the White House. But hours later, more than one million mail-in ballots remained to be counted, many of them from Democrats, which a political scientist said left open the possibility that Democratic challenger Joe Biden could still pass Trump’s tally. 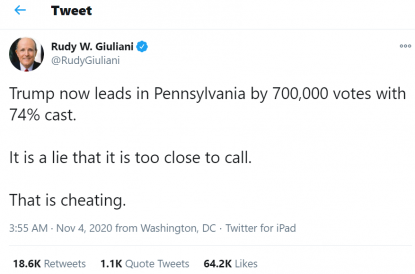 Screenshot taken November 4, 2020 of a tweet by Rudy Giuliani

His comments, shared more than 20,000 times, were also posted by others on Facebook including here and here, as well as on Instagram here.

Shortly after AFP accessed the above data Giuliani inaccurately tweeted “@realDonaldTrump up by 550,000 with 75% counted.” Giuliani alleged “massive cheating” and said he was headed to Philadelphia with his legal team.

State data accessed at 1:07 pm by AFP showed that officials had counted almost 57 percent of the nearly 2.6 million mail-in ballots that had been cast and entered into the system as of November 3. That still left 1,120,321 to be tallied.

The latest data can be found here through a dashboard which Pennsylvania Secretary of the Commonwealth Kathy Boockvar referred to at a press conference with Governor Tom Wolf on the morning of November 4.

Still more ballots will be arriving and counted later, under a decision by the Pennsylvania Supreme Court which Republicans unsuccessfully sought to have reviewed by the Supreme Court of the United States before the election.

Ballots postmarked on or before Election Day and received in the state up until 5:00 pm on November 6 will still be valid, under that ruling.

“Ballots can be received and counted all the way up until Friday,” state Attorney General Josh Shapiro said, before the Trump campaign announced a lawsuit later on November 4 in a bid to halt the count.

A “large fraction” of those votes still to be counted were cast by registered Democrats, Michael Hagen, an associate professor of political science at Temple University in Philadelphia, told AFP by email.

There are enough, he said, “that it might be possible for Biden to catch and pass Trump’s vote total. That’s what is creating the uncertainty that falls under the general heading of ‘Too close to call.’”

It is not only Democratic strongholds that are still counting, either, said Hagen.

“What I’m hearing suggests that election officials all over the state are working very hard to count all the votes that have arrived as soon as possible,” said Hagen, who specializes in US politics and elections.

State officials repeatedly stressed the integrity of their counting process.

“The most important thing is that we have accurate results,” Wolf told the morning press conference, “even if that takes a little longer than we're used to.”

Americans turned to mail-in ballots in unprecedented numbers for this election as a safer alternative to heading to polling stations during the pandemic. Trump, time and again, has claimed that postal ballots lead to widespread fraud, a claim which AFP Fact Check has debunked.

As the count in other states pushes Joe Biden closer to winning the presidency, Trump has alleged widespread fraud.

He had also denounced the court decision on Pennsylvania’s extended mail-in ballot deadline, claiming it would “allow rampant and unchecked cheating.” Twitter labelled his tweet as potentially misleading.

The head of the Organization for Security and Cooperation in Europe mission which monitored the US vote said there was no evidence of fraud in the “well managed” election.