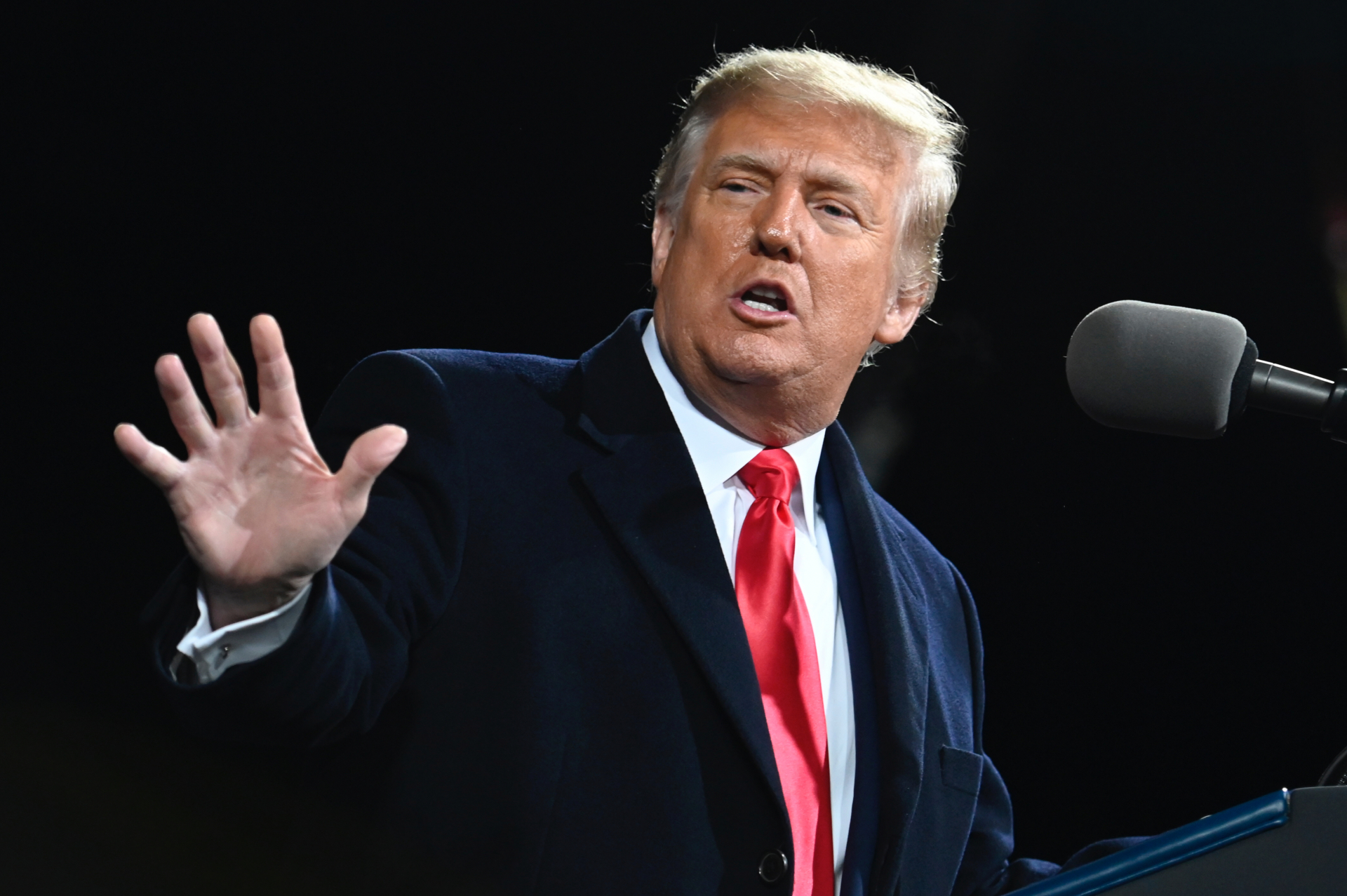 US President Donald Trump at a rally at Valdosta Regional Airport in Georgia on December 5, 2020 (AFP / Andrew Caballero-Reynolds)

Donald Trump made a series of unsubstantiated claims about US presidential election results from Georgia during an hour-long call with its secretary of state and other officials, rejecting the legitimacy of the vote a little more than two weeks before he is due to leave the White House.

The president -- who has repeatedly said without evidence that the 2020 election was plagued by fraud -- urged Republican Brad Raffensperger to “find” enough votes to overturn his loss to Democrat Joe Biden.

Secretary of State Raffensperger -- Georgia’s top elections official, who is responsible for certifying results -- and his office’s lawyer repeatedly pushed back against Trump’s allegations during the January 2 phone call.

“I personally found it to be something that was not normal, out of place… Nobody I know who would be president would do something like that to a secretary of state,” Sterling said of the call.

Below, AFP Fact Check breaks down the key claims made by Trump.

“This is a faulty election result,” the US president said during the call, a recording and transcript of which were released by The Washington Post.

But the ballots in Georgia were counted on three separate occasions, each confirming Biden’s win. The results were certified by Raffensperger, while Governor Brian Kemp, also a Republican, certified the southern state’s 16 electors for the Electoral College vote.

The Georgia result was significant to the overall outcome of the November 3 general election, helping push Biden to a decisive 306 to 232 victory over Trump.

“We’ve seen nothing in our investigations of any of these data claims that shows there are nearly enough ballots to change the outcome,” Sterling said of claims by Trump’s team.

Attorney Cleta Mitchell acknowledged on the call that Georgia officials have information that Trump’s team does not, saying: “You have data and records that we don’t have access to.”

During the call, Trump said that “close to 5,000” dead people voted in the election.

Raffensperger said the actual number was two. “So that’s wrong,” he told the president.

“They are shredding, shredding ballots and removing equipment. They’re changing the equipment on the Dominion machines and, you know, that’s not legal,” Trump said.

“The only investigation that we have into that -- they have not been shredding any ballots. There was an issue in Cobb County where they were doing normal office shredding, getting rid of old stuff, and we investigated that. But this stuff from, you know, from you know past elections,” he said.

The secrecy envelopes -- which shield the ballots -- are “just basically trash,” while the ballots themselves are being kept as required by law, he said.

Germany said that neither machines nor parts from Dominion Voting Systems -- a company that Trump and his supporters have repeatedly targeted with unfounded vote fraud claims -- were removed.

Sterling agreed. “No one is changing parts or pieces out of Dominion voting machines.... I don't even know what that means. It's not a real thing. That's not happening,” he said.

Trump said a “whole gang took the stuff from under the table” during the counting process, and that ballots were also scanned multiple times.

The first claim apparently refers to alleged wrongdoing shown in a video of containers of ballots being brought out and counted -- an assertion that has been previously fact-checked by AFP and found to have no merit.

Frances Watson, the chief investigator in the office of Georgia’s secretary of state, testified on December 5 that “our investigation and review of the entire security footage revealed that there were no mystery ballots that were brought in from an unknown location and hidden under tables as had been reported by some.”

Fulton County, where the vote count took place, and Sterling have also said that the clip does not show wrongdoing.

On the second claim, Raffensperger said: “We did an audit of that, and we proved conclusively that they were not scanned three times.”

Ballots being scanned multiple times would have shown up in the hand recount of votes, which Sterling said did not reveal problems with machine scanning.

“If somebody took a stack of ballots and scanned them multiple times, you would have a lot of votes with no corresponding ballots. So let's go over the numbers one more time. Statewide... for the sheer number of ballots, they were off by .1053 percent,” he said.

“For the margin, they were off by .0099 percent, which shows that the machines scanned properly, our counties did a great job of following these batches and doing the hand count properly, appropriately, with scrutiny, and with observers.”

“You had out-of-state voters. They voted in Georgia, but they were from out of state,” Trump said.

Germany said the claim was inaccurate.

“Every one we’ve been through are people that lived in Georgia, moved to a different state, but then moved back to Georgia legitimately,” he said.

“They moved back in years ago. This was not like something just before the election.”