Skip to main content
A customer has her temperature checked as a preventative measure against the COVID-19 coronavirus inside a cafe in Seoul on August 31, 2020. (AFP / Ed Jones)

Multiple posts shared repeatedly on Facebook and Korean platform Naver claim that South Korea banned whipped cream at coffee shops on January 1, 2021. The claim is false: the South Korean government introduced a new regulation that requires cafes to use high-pressure gas cylinders for charging whipped cream dispensers, rather than a nitrous oxide cartridge. The new rule is designed to prevent abuse of nitrous oxide, which can be a hallucinogenic, the government said. The new regulation will not have a significant impact on cafes, a Seoul-based cafe owner told AFP. 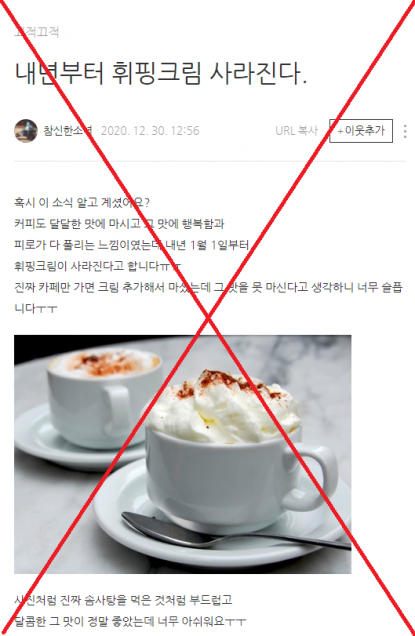 A screenshot of the misleading Naver blog post. Captured on December 31, 2020

The post’s Korean-language text translates to English in part as: "Whipped creams will disappear from next year.

"Have you guys seen this news?... Whipped cream will be gone in South Korea from January 1 2021. It makes me so sad. Every time I go to cafes, I always have my coffee with whipped cream, but now I won't be able to do that!"

South Korea’s Ministry of Food and Drug Safety announced on September 21, 2020, a new regulation that requires cafes to use high-pressure gas cylinders, instead of nitrous oxide cartridges, in order to charge whipped cream dispensers. The cylinders must contain more than 2.5 litres of nitrous oxide, the ministry said in a statement.

The new rule, which came into effect on January 1, 2021, is designed to prevent abuse of nitrous oxide cartridges, it said.

“Since 2017, there have been cases that people consume nitrous oxide as hallucinogenic through carbon monoxide-inflated balloons, locally known as ‘Happy Balloons’, and it has become a social issue,”  the statement reads.

“It turned out many people got hold of nitrous oxide through a nitrous oxide cartridge, which is easy to purchase online and carry around. So that we have decided to ban the use and distribution of it.

“From January 1, 2021, coffee shops and cafes are not allowed to use or stockpile nitrous oxide cartridges.”

The ministry emphasised that the change would not affect the quality of the whipped cream.

Ahn Sang-hyun, a Seoul-based cafe owner, told AFP the impact of the government’s new rule would be insignificant.

“Providing whipped cream to customers is one of the essential services, but there are many alternative ways to do so apart from using a nitrous oxide cartridge and whipped cream dispenser, such as using store-bought whip cream products,” he said during a phone interview on December 31, 2020.

“As far as I understand, not many individual and small-sized coffee shops rely on a nitrous oxide cartridge to produce whipped cream due to its cost and need for a frequent refill.”