Social media posts claim a ballot was cast in the 2020 US election on behalf of a deceased Michigan man born in 1902, pointing to the case as evidence of fraud. This is false; votes determined to be from dead people would not be counted, and the city of Detroit’s principal attorney said a legitimate ballot was incorrectly attributed to the man due to a “clerical error.”

“Turns out 118 year old ‘William Bradley’ voted via absentee ballot in Wayne County, Michigan. William Bradley died in 1984,” said a November 5, 2020 tweet that has been retweeted tens of thousands of times. 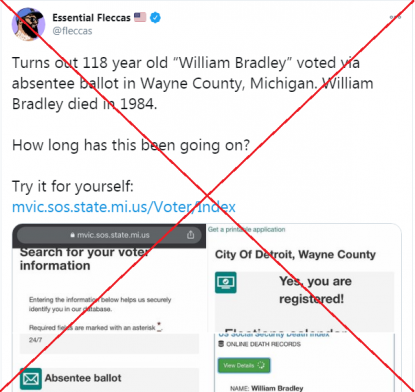 The claim about Bradley -- which has also been made on Facebook, YouTube and Reddit -- is circulating online as US President Donald Trump insists without evidence that Democrats cheated to help Joe Biden in the election, and that he in fact won.

Some social media posts encouraged people to input Bradley’s details into the Michigan Voter Information Center site, which returns a record of an absentee ballot being sent to him on September 19 and received on October 2.

But “no ballot for the 118-year-old Mr. Bradley was ever requested, received or counted,” Lawrence Garcia, Detroit Corporation Counsel, said in a statement sent to AFP by email.

“A man with a nearly identical name requested a ballot and voted properly in both the primary and general elections. When his ballot was initially logged, however, it was incorrectly attributed to the William Bradley born 118 years ago through a clerical error,” Garcia said.

Tracy Wimmer, director of media relations for Michigan’s secretary of state, said that “there are 2 William Bradleys in the Qualified Voter File” registered at the same address, “one born 1902 and one born 1959.”

Wimmer also said that ballots cast on behalf of deceased voters would not be accepted.

“Ballots of voters who have died are rejected in Michigan, even if the voter cast an absentee ballot and then died before Election Day,” she said.

AFP Fact Check has debunked a series of inaccurate claims of fraud in the 2020 general election, which can be viewed in English here.