Skip to main content
A woman walks past a newspaper box in downtown Washington, DC with the headline showing that the US presidential election is still undecided on November 8, 2000 (AFP / Shawn Thew)

The day after the 2020 presidential election was called for Joe Biden, the communications director for Donald Trump’s campaign tweeted a photo of a newspaper front page announcing Al Gore’s victory 20 years earlier to highlight an alleged mistake by journalists reporting on results. But, the Washington Times said the photo had been “doctored,” and the original correctly described George W. Bush as the 2000 presidential election winner.

“Greeting staff at @TeamTrump HQ this morning, a reminder that the media doesn’t select the President,” Tim Murtaugh tweeted on November 8, 2020.

Two photos were attached to the tweet. One showed an image of a front page of The Washington Times that read: “PRESIDENT GORE,” followed by: “Florida pushes Gore over the top with bare majority.” The second showed dozens of copies of the image on the walls of the Trump campaign headquarters. 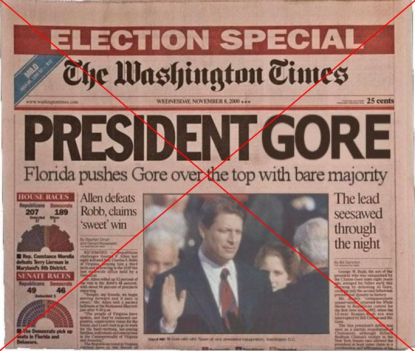 The tweet was later deleted, but screenshots of the photo of the front page remained and were shared on other social media platforms, including on Facebook.

However, the image is a doctored version of a real front page by The Washington Times, a newspaper based in the US capital.

“These photos have been doctored,” the conservative-leaning newspaper replied to Murtaugh on Twitter. “The Washington Times never ran a ‘President Gore’ headline.”

The doctored photo was based on a November 8, 2000 copy of The Washington Times. The original copy that was falsified read: “PRESIDENT BUSH,” followed by: “Florida pushes Texan over the top with bare majority,” according to a photo by a Twitter user who said they had a physical copy. However, other printed versions of the November 8, 2000 Washington Times edition featured the headlines “No President Yet,” and “Down to the Wire.” 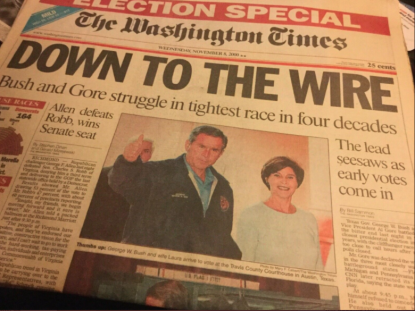 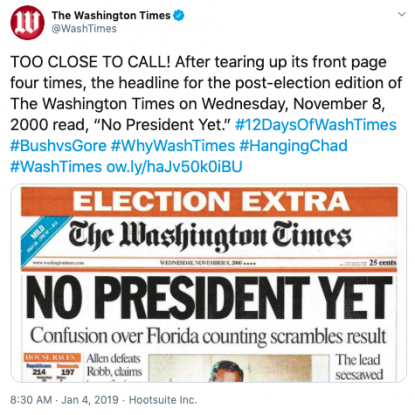 The falsified headline tweeted by Murtaugh was based on the “PRESIDENT BUSH” version, as it is the only one that reports 207 seats for House Republicans, and 189 for House Democrats.

While the headline was doctored in the image tweeted by Murtaugh, other text on the front page was not, CNN reporter Andrew Kaczynski pointed out on Twitter. One article read:

“George W. Bush, the son of the president who was vanquished by the Clinton-Gore team eight years ago, avenged his father early this morning by defeating Al Gore, creating only the second father-son presidential dynasty in history.”

False calls did happen in 2000

On the night of November 7, 2000, news organizations including ABC, CBS, NBC, CNN, Fox and the Associated Press predicted Democrat Al Gore had won the race. But Bush’s victory was eventually called by most media on November 8.

An agonizingly long recount in the key battleground state of Florida was eventually halted by the US Supreme Court weeks later, definitively giving the presidency to Republican Bush.