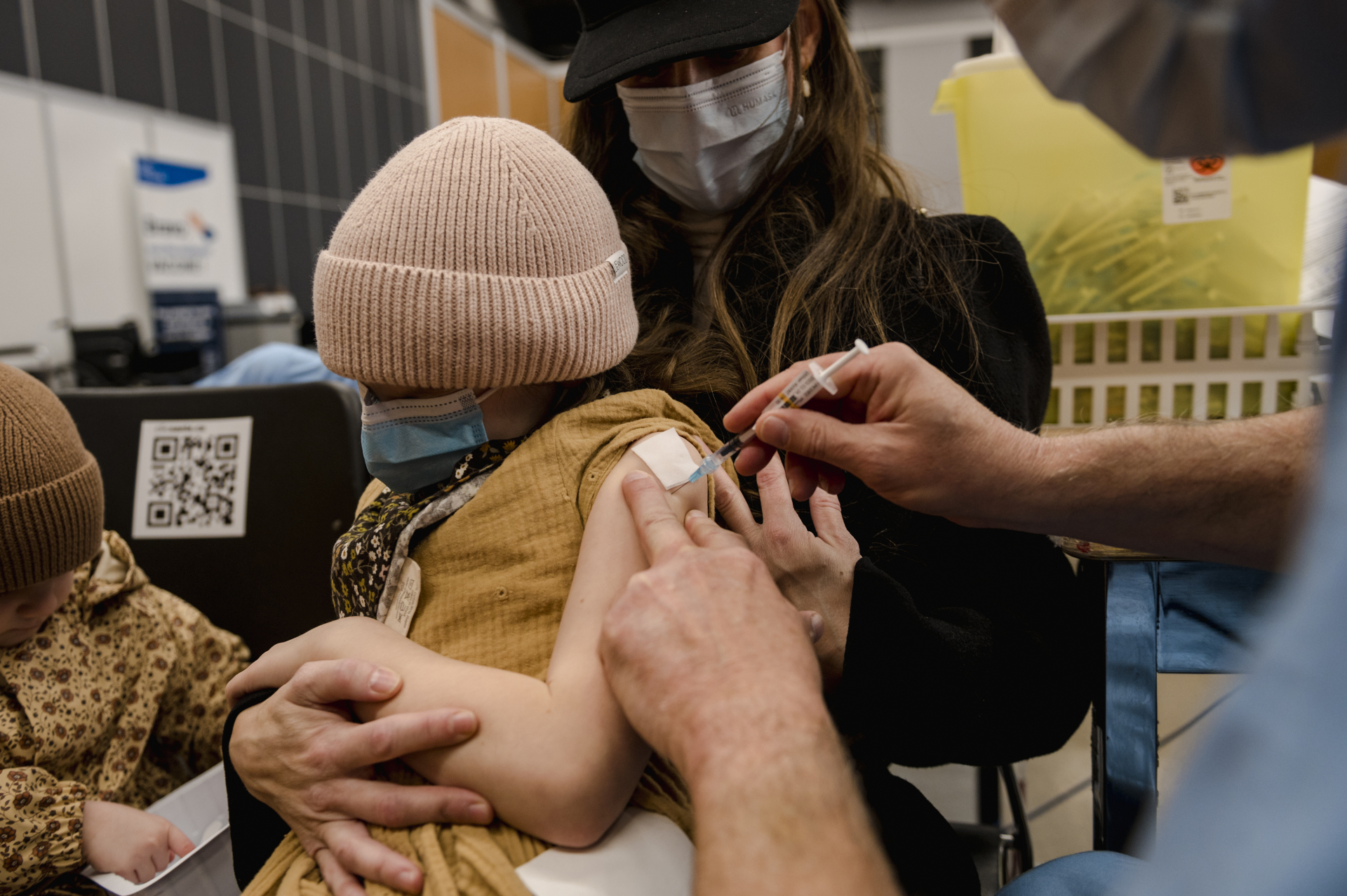 A video produced by a group claiming to represent Canadian doctors and health care professionals alleges that the Pfizer-BioNTech Covid-19 vaccine is dangerous. But the video repeats several previously debunked assertions about the safety of the shot, experts say the benefits outweigh the risks of rare side effects, and the Canadian government recommends it to prevent hospitalization and death.

"The Pfizer Inoculations For COVID-19 - More Harm Than Good," says the title of a video released by the Canadian Covid Care Alliance (CCCA). In the video, CCCA claims to represent more than 500 "independent doctors, scientists and health care practitioners," but has not released the names or affiliations of its members. 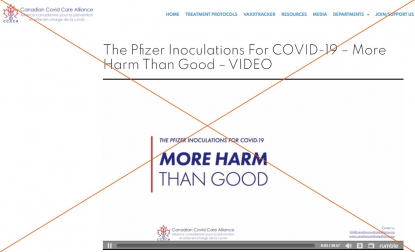 The nearly 40 minute-long presentation was shared across the internet, including on Facebook and Twitter, and has been viewed more than 800,000 times on the Canadian video-sharing site Rumble. It follows other misleading videos released by Canadian doctors about the pandemic that AFP Fact Check has debunked.

Robert Malone, an American researcher who in the late 1980s contributed to the development of mRNA vaccines and who AFP has previously fact-checked, has also claimed that he was removed from Twitter after sharing the video.

The Omicron variant of the coronavirus has created a spike in new cases in Canada, and the National Advisory Committee on Immunization (NACI) recommends vaccines to all eligible Canadians aged five and older, finding them to be "very effective at preventing severe disease, including hospitalization and death due to Covid-19."

NACI also recommends booster shots six months after initial vaccination, particularly for those over the age of 50 or anyone older than 18 who did not receive a messenger ribonucleic acid (mRNA) jab initially.

Below, AFP breaks down some of the inaccurate claims made in the CCCA video.

Claim: 'Animal testing was skipped' in the development of the Pfizer-BioNTech Covid-19 vaccine 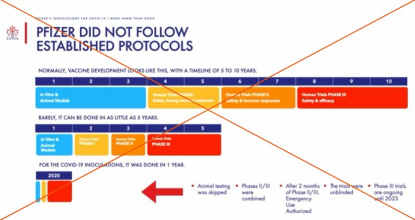 The video claims that animal testing was "skipped" during the vaccine's development, leading to compromised safety. That is false. Pfizer-BioNTech tested the mRNA shot on rhesus macaques and that data was reviewed by Health Canada prior to authorization of the vaccine.

Experts told AFP for a previous fact check that the urgency of the pandemic resulted in some testing on humans and animals being conducted simultaneously for both the Pfizer-BioNTech and the Moderna vaccines.

Although the Covid-19 shots are the first to use mRNA technology, research on it started in the early 1990s, and included promising tests on animals.

Claim: Pregnant and breastfeeding people are 'being told that it's safe to take the inoculations, when it hasn't been proven it's safe for them' 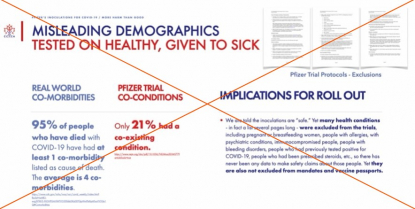 The video claims that because pregnant and breastfeeding women were excluded from Pfizer-BioNTech's clinical trial, there "has never been any data to make safety claims about those people and inoculations." This is false. Studies have followed pregnancy outcomes, particularly in health care workers who were among the first to receive the Covid-19 shots.

Kathryn Gray, attending physician of maternal-fetal medicine at Brigham and Women's Hospital, is the lead author of one such study in the United States. She told AFP on December 16, 2021 that: "There are no safety signals in lactating or pregnant individuals."

Similarly, data from Ontario that showed that "rates of pregnancy and birth outcomes among vaccinated individuals do not suggest any pattern of increased risk."

Pregnant individuals are at an increased risk for severe disease from Covid-19 and the disease may be associated with increased risks of preeclampsia, preterm birth and other adverse pregnancy outcomes. The Society of Obstetricians and Gynaecologists of Canada recommends vaccination against the disease "during pregnancy in any trimester and while breastfeeding." 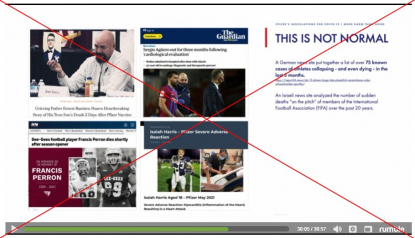 The video claims that an Israeli news report found a spike in the number of deaths on the pitch in the International Football Association (FIFA) in 2021. The claim is based on an article, published in Hebrew, by "Real Time News." An explanation of the reporting behind the article -- which included referencing a Wikipedia list of footballers who died while playing -- was shared in this English-language Twitter thread.

In October 2021, AFP's German fact-checking team contacted Florian Egger of the Institute of Sports and Preventive Medicine at Saarland University in Germany about the Israeli article. He works on the FIFA Sudden Death Registry and led research that examined the underlying causes of footballers dying.

Egger said that there are "no more deaths among footballers than before the Covid-19 pandemic."

This conclusion was echoed by Tim Meyer, team doctor for the German national football team. He told AFP on October 19: "From my point of view, the assertion that deaths in sport or in football in particular increased after the introduction of vaccination against Covid-19 has no basis."

The video also highlighted a series of media reports about athletes collapsing on the pitch. Though AFP could not verify every example, one clip is from the Euro 2020 football tournament in which Danish footballer Christian Eriksen collapsed on the pitch during a match against Finland on June 12, 2021.

At the time, AFP investigated claims that Eriksen's collapse was related to a Covid-19 vaccine, but the Danish Football Association and the director of his club Inter Milan said he had not been vaccinated.

Another media report featured in the video was a screenshot of a November 2021 article from The Guardian about Argentine footballer Sergio Aguero's "cardiac evaluation." The article makes no mention of Covid-19 or vaccination.

Aguero announced his retirement from professional football in December 2021 after being diagnosed with a heart problem, but EuroSport reported that cardiologist Roberto Peidro, who has treated the Manchester City star since 2004, said his heart condition has "nothing to do with Covid or the Covid vaccine."

Rare cases of heart inflammation (myocarditis and pericarditis) following vaccination with mRNA-based jabs such as Pfizer-BioNTech have been reported.

The Canadian government says most cases are mild and patients recover quickly. It has classified the cases as adverse events of special interest (AESI), saying they "have the potential to be causally associated with a vaccine product" and "must be carefully monitored and confirmed by further special studies."

Health Canada also cautions that "the risk of cardiac complications, including myocarditis, has been shown to be substantially increased following SARS-CoV-2 infection, and that it is higher following infection than after vaccination." 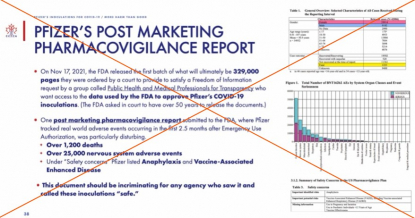 The video points to a document released by the US Food and Drug Administration to claim that it revealed more than 1,200 deaths related to Pfizer-BioNTech's Covid-19 vaccine in a 90-day period. This document has been misleadingly shared across social media, but does not contain evidence to indicate the vaccine was linked to deaths.

The figure of 1,223 fatalities among 158,893 adverse effects reflect "spontaneous" reports from sources that include health officials in several countries, without any verification of the cause, Pfizer spokeswoman Dervila Keane told AFP for a previous fact-check.

Clinical research also indicates no link between the Pfizer-BioNTech vaccine and fatalities.

A multinational, placebo-controlled, observer-blinded trial reported in the New England Journal of Medicine on December 31, 2020 showed no fatalities among vaccine or placebo recipients and stated: "The safety profile of (the shot) was characterized by short-term, mild-to-moderate pain at the injection site, fatigue, and headache. The incidence of serious adverse events was low and was similar in the vaccine and placebo groups."

The Canadian government investigates any death reported following vaccination. It says that one death linked to the rare complication Thrombosis with thrombocytopenia syndrome (TTS), or blood clotting with low platelet levels, was reported following the Pfizer-BioNTech vaccine.

Tara Moriarty, an associate professor and infectious disease researcher at the University of Toronto, said that it is important to understand that just because someone dies after being vaccinated, it "doesn't mean that it was related to the vaccine itself."

Moriarty conducts vaccine information sessions across Canada and advises people to pay attention to "the overwhelming international consensus," pointing out that "multiple independent national regulatory agencies all over the world" are studying data from their populations -- not the pharmaceutical companies -- to make decisions about the safety of the Covid-19 vaccines.

The researcher said people should be skeptical of organizations like CCCA which fail to disclose the identities of their members and which may profit from prescribing Covid-19 treatments such as ivermectin that have not been shown to be effective in treating or preventing the disease.

More of AFP Fact Check's reporting on vaccines can be found here.