Skip to main content
A child receives a dose of Pfizer-BioNTech Covid-19 vaccine at the Clemenceau rehabilitation center in Strasbourg, France on December 22, 2021 ( AFP / Sebastien Bozon)

A video viewed hundreds of thousands of times online features researcher Robert Malone making a series of claims about mRNA Covid-19 shots causing harm to children. But experts say the claims are inaccurate, and a physician from a leading children's hospital called the video "dangerously and flagrantly incorrect."

Malone, an American researcher who in the late 1980s contributed to the development of mRNA vaccines, the technology used in the Pfizer-BioNTech and Moderna Covid-19 shots, describes himself as "the original inventor of mRNA vaccination." In reality, many other scientists have been involved in the process for decades.

The video -- which has more than 500,000 views on Rumble, more than 110,000 views on 3Speak, and also appeared on Malone's Twitter account -- is circulating as Covid-19 cases surge in the United States, driven by Omicron, the most infectious variant seen to date. 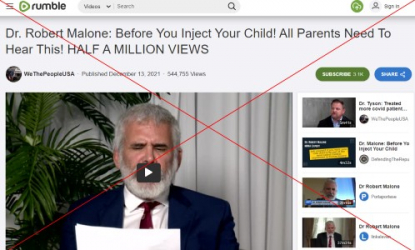 Pfizer-BioNTech Covid-19 shots received emergency use authorization in the United States for children aged five through 11 years on October 29, and for adolescents aged 12 to 15 in May.

The US Centers for Disease Control and Prevention recommends that everyone over the age of five receive a Covid-19 shot, emphasizing that the immunization is safe and effective, including for children and teens. But parents continue to be targeted by misleading warnings on Covid-19 vaccination.

Below, AFP Fact Check examines three claims made by Malone in the video.

In the video, Malone identifies spike proteins as dangerous and the source of the purported organ problems.

"A viral gene will be injected... This gene forces your child's body to make toxic spike proteins. These proteins often cause permanent damage in children's critical organs," he said.

"There's no evidence, either in experimental animals or people," he said.

American Academy of Pediatrics fellow Deborah Greenhouse agreed. "There is absolutely no evidence that the spike proteins generated in response to the Covid-19 vaccine are toxic," she said.

Messenger ribonucleic acid (mRNA) vaccines work by introducing a "blueprint" of the coronavirus spike protein, part of the virus that the body can then recognize and fight if it encounters it later, without ever exposing it to the actual virus.

The Pfizer and Moderna Covid-19 shots are the first to use the cutting-edge technology. They differ from traditional vaccines, which confront the immune system with part of a virus in a weakened or deactivated form to build antibodies.

Greenhouse explained: "The spike protein is a useful target for the vaccine because it is different than other proteins that humans can produce. So our immune system is able to recognize it as foreign and mount an immune response against it. There is also no evidence that the spike protein remains in the body longer than other typical proteins and no evidence that it causes significant damage."

AFP Fact Check debunked another claim that spike proteins are dangerous in May 2021, when experts said that the spike proteins in Covid-19 vaccines are safe because they only remain in a person's arm muscle for a short period.

"There is no evidence to support that spike proteins produced by the Covid-19 mRNA vaccines are toxic in any way," said Alexandra Yonts, a pediatric infectious diseases physician at Children's National Hospital in Washington, DC.

Millions of people across the world have now been vaccinated with mRNA Covid-19 vaccines, and rigorous safety follow-up and data collection "don't show any evidence of toxicity on a gross scale," she said.

Malone also says that the spike proteins generated through mRNA Covid-19 vaccines often cause irreparable damage in children's "brain and nervous system, their heart and blood vessels, including blood clots, their reproductive system, and most importantly, this vaccine can trigger fundamental changes in their immune system."

It is true that vaccines trigger changes in the immune system, said Yonts. "That is literally the goal of vaccination."

"The vaccine will lead to changes in the immune system, in that it provides the immune system with a target to develop immune memory against the spike proteins to protect people from disease," she said.

However, the rest of Malone's statement is not supported by evidence.

"There is absolutely no evidence that the spike proteins can cause permanent damage to children's vital organs," Greenhouse said.

Rare serious side effects have been reported following mRNA Covid-19 vaccination, including by younger men who have developedmyocarditis or pericarditis -- inflammation of or around the heart.

But Yonts and Offit explained that the cases of myocarditis were temporary, not permanent, as Malone claims.

"Myocarditis is clearly a consequence of the mRNA vaccine. It's rare, but it's real," Offit said. But the condition is "short-lived, transient and self-resolving."

Both Offit and Yonts pointed out that data shows the rare cases of myocarditis are not a direct consequence of the spike proteins themselves, as Malone says.

Scientists are still learning about these myocarditis cases, but they are more likely connected to the body's innate immune response, not the specific Covid-19 shot spike proteins, said Yonts.

She added that data shows Covid-19 infection could potentially cause the issues listed by Malone, but not the mRNA vaccines.

Claim: There is no benefit to vaccinating children against Covid-19

Malone says: "In summary, there's no benefit for your children or your family to be vaccinating your children against the small risks of the virus... The risk-benefit analysis is not even close with this vaccine for children."

All three doctors AFP spoke with emphatically rejected this claim.

"The theoretical risk of Covid vaccines absolutely do not outweigh the benefit of the vaccine," said Greenhouse.

"Over 1,000 children have now died from Covid infection. Tens of thousands have been hospitalized. One of my patients was hospitalized this past week with significant illness from Covid disease," she said.

"The vaccine has been shown to be safe and effective for children five years of age and older," Greenhouse said, adding: "The risk benefit ratio based upon data available to this point clearly favors vaccinating children ages five-11."

Yonts also emphasized that there is "absolutely a benefit to vaccinating your children for Covid-19."

While children are generally protected from the worst of the disease, Covid-19 does affect children and there have been Covid-19-related deaths, she said.

Offit said a week and a half ago, at Children's Hospital of Philadelphia alone there were 18 children hospitalized for the disease, and "a handful went to the intensive care unit."

What the children all had in common was that they and their immediate families were unvaccinated, even though all but one, who was under five, could have been.

"Those kids were sick," Offit said. "The hospital is the place for the unvaccinated."

He added: "If anyone takes this man seriously, then they could put either themselves or their children at risk."

Greenhouse said she found the video to be "misleading and frankly dangerous," and "misinformation."

"People without a medical background will believe the statements in the video because Malone comes across as a knowledgeable 'expert.' The result is that many parents will decide not to vaccinate their children based upon this misinformation. That is why it is so crucial for us to widely disseminate evidence-based, study-proven information," she said.

Yonts said that her "overall take is that there's just no rationale behind it, and I find it irresponsible to put that out there without anything to back up his claims."