Skip to main content
A pregnant woman receives a dose of the Moderna vaccine against Covid-19 in Asuncion, Paraguay on June 11, 2021 (AFP / Norberto Duarte)

In a video shared across social media, a woman claiming to be a doctor touts hydroxychloroquine to treat Covid-19, despite multiple studies finding it is not effective, and repeats previously debunked myths about the mRNA vaccines granted emergency authorization for use in the United States.

“A doctor speaks about the v*x,” is the title of a seven-minute-long video posted to Bitchute on May 21, 2021.

The purported doctor wears a white coat and a stethoscope around her neck. She is not identified by name, but claims to have worked in “health care” for more than 40 years, and to have successfully treated more than 1,000 patients suffering from Covid-19. 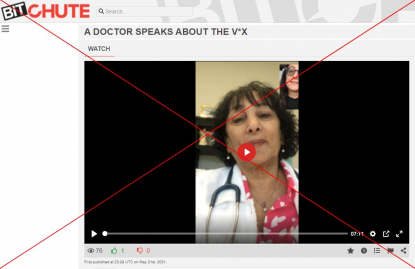 Screenshot of a video posted to Bitchute, taken on June 15, 2021

Clips from the video were viewed hundreds of times on Facebook and on Gab. It was also subtitled in Croatian and shared here, here, and here.

The video includes claims about Covid-19 treatments and vaccinations that have been previously debunked.

Claim: Hydroxychloroquine and ivermectin are “wonderful” to use in treating Covid-19

Hydroxychloroquine rose to prominence in 2020 when public figures including former US president Donald Trump and controversial French doctor Didier Raoult presented the drug as a “treatment” for Covid-19, without solid scientific evidence.

Dr Jason McKnight, clinical assistant professor at the Texas A&M College of Medicine, told AFP in March 2021: “Multiple studies have shown that not only does hydroxychloroquine not prevent or treat Covid-19, but there can be adverse effects from the use of medication, and taking it may very well cause more harm than benefit.”

On March 2, the World Health Organization strongly advised “against use of hydroxychloroquine to prevent Covid-19.”

“High certainty evidence showed that hydroxychloroquine had no meaningful effect on death and admission to hospital,” while other evidence showed “it probably increases the risk of adverse effects,” the global health body said in a statement. 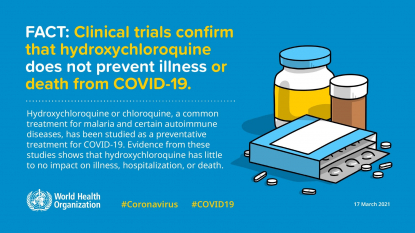 The US Food and Drug Administration (FDA) also does not recommend using ivermectin, normally given to treat parasitic infections, for the treatment or prevention of Covid-19. It said that “some initial research is underway,” but that the drug can interact with other medications, including blood thinners.

WHO guidelines published on March 31, 2021 advised that ivermectin only be used to treat Covid-19 in clinical trials.

The FDA has approved the use of the antiviral drug Veklury (remdesivir), for certain hospitalized patients, but the video does not mention this treatment.

AFP Fact Check previously examined the data regarding the efficacy of hydroxychloroquine and ivermectin in fighting off Covid-19 here.

Claim: The Covid-19 vaccine “is not a vaccine, it’s an experimental biological agent”

The woman in the video denounces Covid-19 vaccines as “experimental” and claims “you need your DNA to work. This is going to destroy it.”

The mRNA shots against Covid-19 from Pfizer-BioNTech and Moderna are the most widely administered in the US and the first to use the cutting-edge messenger ribonucleic acid technology, which differs from that of other vaccines. Instead of confronting the immune system with part of a virus in a weakened or deactivated form to build antibodies, it introduces a “blueprint” of the spike protein, part of the virus that the body can then recognize and fight if it encounters it later.

But experts have repeatedly said that mRNA vaccines do not alter the recipient’s genetic makeup.

Grant McFadden, director of the Biodesign Center for Immunotherapy, Vaccines, and Virotherapy of Arizona State University, told AFP in March 2021 that mRNA vaccines “do not change the genetic DNA of the host cells, and cannot alter the genes of the recipient’s cells.”

The same was confirmed in March by Matthew Miller, associate professor with the Department of Biochemistry and Biomedical Science at McMaster University in Hamilton, Ontario.

“mRNA is the code for proteins,” he explained. “It does not alter the DNA of your cells.”

Claim: “Girls that are child-bearing age -- they are not going to be able to have children.”

The woman in the video goes on to claim that mRNA vaccines are leading to unusual numbers of miscarriages and will cause sterility.

There is no evidence that Covid-19 vaccines negatively impact women’s reproductive health, according to multiple experts and public health bodies, but misinformation on the topic is threatening vaccine uptake.

In February 2021, the American College of Obstetricians and Gynecologists, the American Society for Reproductive Medicine and the Society for Maternal-Fetal Medicine issued a joint statement about the Covid-19 shot, saying: “There is no evidence that the vaccine can lead to loss of fertility.”

AFP Fact Check asked the US Centers for Disease Control and Prevention (CDC) -- which runs the Vaccine Adverse Event Reporting System (VAERS) in concert with the FDA -- if it had identified any trends of miscarriages following Covid-19 immunization.

“To date, no evidence has indicated an increase in miscarriages after Covid-19 vaccines, and no concerning patterns of reporting have been observed,” a spokesperson responded in February 2021.

AFP also debunked the false claim that mRNA vaccines will cause the immune system to attack a protein involved in placenta formation, syncytin-1, because this protein shares a short amino acid sequence with the spike protein of the Sars-Cov-2 virus.

Pfizer spokeswoman Dervila Keane, said in December 2020 that the sequence was “too short -- four shared amino acids -- to plausibly give rise to autoimmunity.”

In the US, more than 311 million Covid-19 shots have been administered, but misinformation about vaccines can be found across social media.